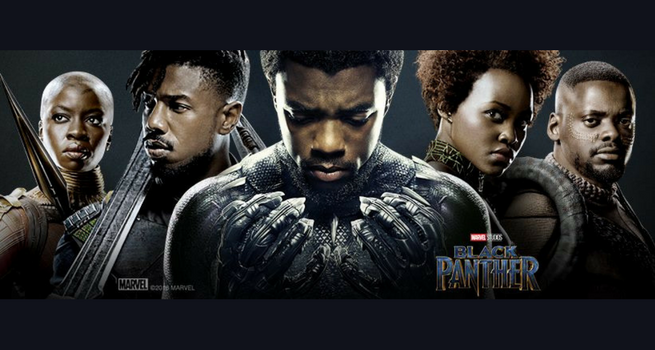 Marvel’s thrilling superhero movie Black Panther has already proven to be a huge success. The first major Marvel film featuring a Black lead role and a majority Black cast has surpassed projections and shattered box office records. Bringing in $201.8 million over its opening Friday to Sunday weekend, it shattered the record for biggest February opening weekend—previously held by Deadpool ($132 million). It has the fifth-biggest opening weekend of all time, coming behind huge blockbusters like The Last Jedi, Jurassic World, and The Avengers. When the Presidents’ Day holiday is included, it has the second-highest four-day weekend of all time.

With legendary actors including Forest Whitaker, Angela Bassett, and Chadwick Boseman, the acting is terrific. The majority of the cast perform African accents well (with the exception of the actor with whom I share a last name). The cinematography is beautiful, including a superb one-shot fighting scene that required heavy planning, logistics, and multiple takes. The sets and scenes are gorgeous, and they fully fascinate and allure the audience into the land of Wakanda. By the end of the movie, you feel you’ve left a majestic land where you instantly desire to return.

The costumes are beautiful, elegant, and successfully depict Afrofuturism at its finest. What adds to the beauty of those costumes is the fact that the costume designer, two-time Oscar nominee Ruth E. Carter, did her research. Carter features elements of various African tribes and cultures in her designs. Her costumes, while looking futuristic, have a truly African appearance.

There are several villains in Black Panther including Ulysses Klaue, a black-market arms dealer who we first met in Avengers: Age of Ultron; W’Kabi, a Wakandan who betrays Wakanda, and a challenger to the Wakandan throne-turned-ally named M’Baku. But the arch villain is an African-American named Erik Killmonger, skillfully played by Michael B. Jordan.

Killmonger is without a doubt one of the most layered villains we have ever seen and, arguably, one of the best since the Joker in Christopher Nolan’s The Dark Knight. His backstory accompanied by his charisma captivates and draws the viewer into his character. The movie creates tension as you wrestle with a love for both the protagonist and the antagonist. Many viewers find themselves leaving the movie choosing Killmonger’s side. Unfortunately, Killmonger’s character outshines our beloved, somewhat soft-spoken Black Panther which can be a huge downside for a viewer who is accustomed to cheering for a hero as valiant, witty, strong, and victorious as Iron Man, Spider-Man, and—here comes the DC nod—Superman.

However, Black Panther’s abdication of the spotlight provided opportunity for the strong female roles to shine—and wow did they shine! The film accurately depicts women as strong, independent figures. The Wakandan women were not dependent on a man to rescue them but fought and led throughout the entire movie. The movie does not present a White savior nor a male savior. Rather, it sends a clear message that women are powerful.

The film possesses very powerful themes on faith and justice. The Black Panther, also known as T’Challa, strives to be a strong, moral leader. He leads with fairness even if it jeopardizes his position. During the movie, T’Challa learns that his own father—when he was alive and king—killed Killmonger’s father and abandoned young Killmonger. It is this incident that caused Killmonger to develop hatred toward Wakandans.

T’Challa wrestles with this issue, understanding that the shortcomings of his father are what created this problem. While T’Challa must respond to the threat that Killmonger poses to Wakanda and the entire world, and while that response must be aggressive and violent, you can tell that T’Challa is operating with a level of grace as well. The message is clear and very relevant for us individually and as a country: we must be able to see past cruel behavior directed toward us and to identify the past pain that may have caused such behavior.

It is essential for us to reconcile, restore, and make restitution for such a person, understanding that their behavior may be the result of our crime against them. This may be the answer to some of the greatest challenges we are dealing with as a society today. Perhaps, we would be more effective if we addressed the interventionism and imperialism that led to the creation of groups like ISIS and the ways poverty leads to domestic crime and gang violence.

Personally, I saw some deeper parallels between this movie and the Seventh-day Adventist Church (there are so many layers and object lessons in this movie!). Seeking to stay safe from colonialism and war, Wakanda hides the entire country by using technological camouflage. However, this isolation hinders it from being an asset to struggling groups of people like refugees—and its abundance in resources would allow Wakanda to be an extremely valuable asset. The country misses out on a great opportunity to serve hurting people, opting to keep itself safe instead. Similarly, we Christians often lose sight of our mission in order to protect ourselves. We fear becoming like the individuals that we mingle with (are you seeing the parallels yet?). There are so many lessons that a Christian can take away from this movie!

The most powerful part of Black Panther and the reason for the excitement surrounding it is its powerful covert and overt messages about representation and justice. In an industry that pushes the narrative that films featuring an all-Black cast do not sell well, the success of this film has sent a message that reverberates throughout the film industry. There have been 18 movies in the Marvel Cinematic Universe since Iron Man flew onto the scene in 2008, but Black Panther is the first to feature a Black man as the primary hero. Many of the staff behind the camera were black, including costume designer Ruth E. Carter mentioned earlier. Additionally, though there are very few successful Black directors, Disney/Marvel gave the opportunity to Black director Ryan Coogler, who is known for the critically-acclaimed movies Creed and Fruitvale Station (Coogler is on a role!). In addition to the opportunities the film gave to Black personnel, the movie itself celebrates Black excellence, Black beauty, and African culture. It appreciates African customs, language, and dress. It paints a beautiful picture of what an Africa that is abundant in resources but untouched by colonialism could have been.

I was in tears, both as I watched the movie and as I observed Black people’s reactions, including Black Americans who so often do not have any real knowledge of their African roots and many of whom have denounced their African heritage. I watched as they became proud to be of African descent as a result of this movie. People all over the world have shown up to theaters in African attire. African-Americans struggle with identity issues because our ancestors were taken from Africa and were stripped of all African identity, including name changes, indoctrination, forced assimilation, concealment of African history. To watch a fantasy movie feature aspects of those issues within the struggle of its characters was life-changing for me. The movie has ignited conversations about racial justice, African and African-American relations, and so much more. Whether we currently realize it or not, this movie has made an impact on history.

Chris Whittaker is the Media Pastor at New Life Fellowship on the campus of Andrews University and a student at the Seventh-day Adventist Theological Seminary. He is a pianist and writer and is passionate about social justice.