Art and Morals: Two Aspects of the Same Struggle

Art and Morals: Two Aspects of the Same Struggle 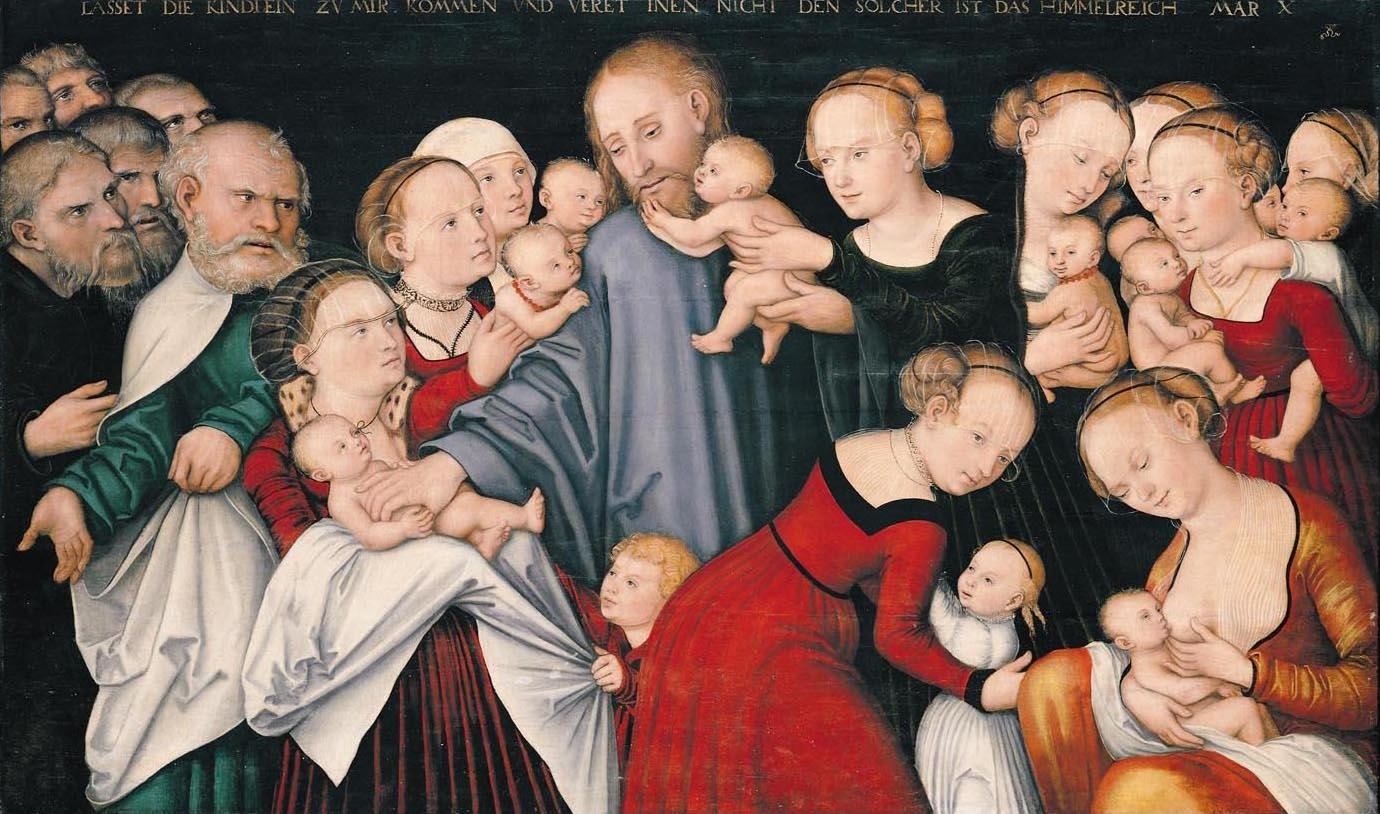 The title of my essay is borrowed from a line in Janet Soskice’s book, The Kindness of God: Metaphor, Gender, and Religious Language.1 Soskice is a feminist theologian and professor at the University of Cambridge, UK. I first learned of her at a symposium I attended entitled, “Women and Religion,” in which she presented a paper on the depiction of women in religious art from the Middle Ages to the present. In her book, Soskice quotes Iris Murdoch, “Virtue is au fond the same in the artist as in the good man in that it is a selfless attention to nature.”2 Hence, Love and Attention, according to Soskice, become the meeting place for the experience of art, or beauty, as with morality, assuming the ethical as central to that meeting. Soskice goes on to say that “to be fully human and moral is to respond to that which demands or compels our response—the other attended to with love.”3 She again cites Murdoch in elaborating on this particular point of response; “I am looking out of my window in an anxious and resentful state of mind…suddenly I observe a hovering kestrel. In a moment everything is altered. The brooding self with its hurt vanity has disappeared. There is now nothing but kestrel.”4

The above descriptions of the philosophical and emotional experiences obtained via the observance of beauty in art as with ethics, morality, and spirituality, came together for me in my recent encounter with a painting by Lucas Cranach the Elder, a 15th Century painter, and close friend of Martin Luther. The painting is entitled “Christ Blessing the Children,” and I was immediately drawn to this particular rendition. Cranach’s version distinguishes itself from most others in that it is the women and children that dominate the painting both in number as in deportment. It is not merely the presence of women, however; other artists also include them. Rather, it is the peculiarities in the common features that make Cranach’s version exceptional. He depicts a less-than-tidy scenario of the women crowding around Jesus in such close proximity that they allow no room or easy access by anyone else. Even Jesus barely has any elbowroom. You can almost envision a pushing and shoving that occurred as these mothers rush toward Jesus to ensure a blessing for their treasures. The woman to the right of Jesus appears to have shoved the baby in His face, and the ones to his left and behind are allowing their babies to grab hold of His tunic as if attempting to climb on His back. As for the woman on the lower right, she stops to breastfeed because, after all, her baby is hungry, and feeding time trumps all else. Meanwhile, the woman in red appears to be crouching to pick up her toddler and bring her to the face of Jesus while the window of opportunity is still wide open. 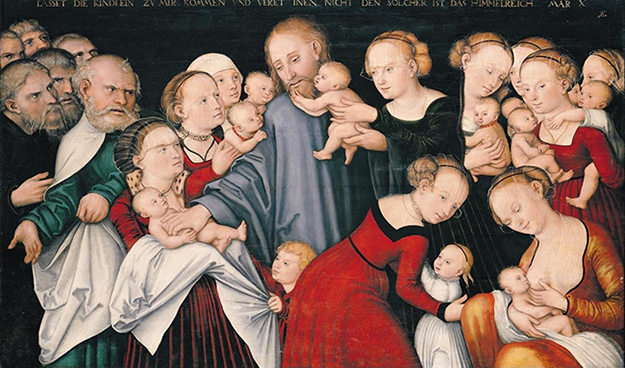 In several of Cranach’s paintings, he often depicts one character that looks directly into your eyes, the viewer! Such is the case in this rendition where we see another woman in red to the far right effortlessly juggling two babies. Her fixed stare is on us, the viewers, and the message her gaze carries must be, undeniably, quite distinct for the viewing man as for the viewing woman. Stare into her eyes for a moment, and with love and attention in place, allow yourself to hear the whispers of the longings of her heart. What an image of eagerness and resolve are portrayed in these women for whom their children’s blessing is of utmost importance from the One in whose image they are made.

And then there are the men! Six of them painted together so tightly that one would be remiss to not feel the sudden and abrupt push that forces them out and behind the inner circle. The one in green appears to barely have had the opportunity to turn around. Their expressions of disapproval at the audacity of these women is by no means understated. Their gazes are sharp, and their brows are frowned, and their sights are fixed directly on the women. The story of Jesus blessing the children is found in three of the four gospels, namely, Matthew, Mark, and Luke. One noteworthy detail in this thrice-identical retelling is the unidentified figures carrying the babies, and accompanying the children. These are referred to in all three gospels simply as “they,” “them,” and “those”—pronouns that preserve ambiguity as to who the individuals were. As is often the case with the androcentric focus so prevalent in the Bible, the wording of this story presupposes an absence of women via the nebulous use of pronouns. Luke recounts the disciples sternly ordering them not to do this, Mark recounts the disciples speaking sternly to them, and Matthew relays the disciples speaking sternly to those who brought them.5 It would be hard to overlook the striking similarities to the observations made today regarding the number of times women are interrupted by men in meetings!

In stark contrast to the men, however, Jesus and the women share similar facial expressions; relaxed brows and mouths, and ever-so-gentle smiles emitted from the corners of their eyes that appear to reaffirm a kinship familiarity that needs no formal introductions, much less apologies. Interestingly, Cranach paints nothing else; no background scenery, no crowds, no rolling hills, no cottony-clouds hanging in a heavenly blue sky—nothing! We are forced to gaze upon the characters, and we are forced to look into their eyes. By eliminating the distracting extras, our attention is turned toward an interaction more than an event.

As I gaze upon Cranach’s rendition of Jesus blessing the Children (attention), and as I gaze upon the exchange of love from the eyes of this particular Jesus and these particular mothers (love), I am compelled to respond to the most powerful reaffirmation of my womanhood in God’s eyes, especially in these anxiety-ridden #MeToo times. Cranach’s rendition of Jesus blessing the children serves as a powerful reminder of the tangible distortion of reality in excluding the presence (or power) of women both in scripture, as in real life. If art and morals share the same struggle, as Soskice writes, and if love and attention are the necessary applications to that struggle, then Cranach’s rendition compels us to address the disparities between a Jesus who deliberately directed His love and attention to women by bringing them to the forefront of His mission and outreach, and the androcentric efforts that relegate them to the shadows. If one picture is worth a thousand words, this painting rewrites the gospel narrative. Whether Cranach intended to put forth this message or not is not documented, but the power of art can speak to the longings of our hearts in ways that renders words impotent.

Lillian Rosa Correa is a native New Yorker living in Oslo, Norway, with her husband Tito and two grown sons. She is the co-founder and director of Comenius Education Services. She holds an MPhil in Religion, Society, and Global Issues, and is currently pursuing graduate studies in the field of Religion and Women. Her passions are her family, her Sabbath School class, religion, women's issues, and art.