Children in Germany Send Over 38,000 Care Packages to Children in Need 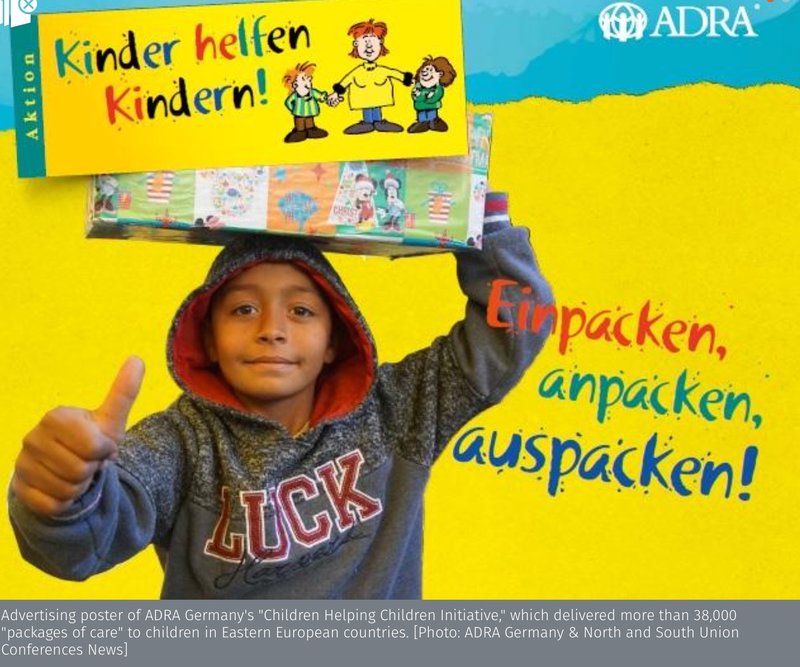 For 18 years, children in Germany have been packing gift packages for needy children in Eastern Europe through the “Aktion Kinder helfen Kindern” (“Children Helping Children Initiative”) campaign, organized by Adventist Development and Disaster Relief (ADRA) Germany. The 2017 Christmas campaign gave out a total of 34,539 packages and 4,196 large boxes with additional donations.

ADRA Germany’s initiative was born out of the idea to put a smile on children’s faces in Eastern Europe.

“Children are especially happy about gifts,” said program coordinators. “And we have considered that certainly, many children in Germany have so many things that they would like to give something away, especially to other children in Eastern Europe.”

The idea was implemented for the first time in 2000, with the creation of the “action package,” and many children in Germany got involved. In total, the initiative reached 650 children in Bulgaria that year.

“The campaign was so well received, that every year since then we have been calling on children throughout Germany to put packages together during the pre-Christmas season and hand them over at the ADRA collection points,” said coordinators.

The initiative has also evolved from a once-a-year event to include other projects which specifically cater to children’s needs and aim to make children happy in the long term. “ADRA supports projects that can have a long-term impact on needy children in Eastern Europe,” said ADRA Germany leaders. “Homes will be equipped, street children will be able to enjoy a good meal in soup kitchens, and a rehabilitation center for children and their families is slated to be opened in Ukraine.”

Their motivation? To take responsibility and share what they have with children and families in distress.

“Every package should give children the message, ‘We are thinking of you,’” program coordinators said. “It is the reason we have been including goodies and attractive gifts in our care packages, [so they know that] we mean well, and we want them to enjoy life. It is something very important for us.”

This article originally appeared on EUD News, the official news service of the Inter-European Division of Seventh-day Adventists. Photo courtesy of ADRA Germany and the North and South Union Conferences.