Adventists at the United Nations Emphasize Compassion for Refugees

Adventists at the United Nations Emphasize Compassion for Refugees 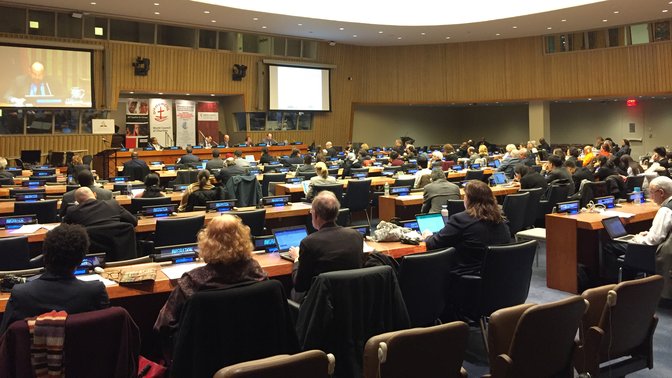 Migrants and refugees are not “problems to be solved,” but vulnerable individuals who must be treated with respect and compassion, said participants at a United Nations symposium co-sponsored by the Seventh-day Adventist Church. The event, held January 22 at the United Nations Secretariat in New York, was the Fourth Annual Symposium on the Role of Religion and Faith-based Organizations in International Affairs, and it brought together some 250 representatives from the UN community, religious groups, and non-governmental organizations.

“Refugees and migrants are not ‘others,’ they are us,” said UN Deputy Secretary-General Ms. Amina J. Mohammed in her opening address to the group. “They are part of the history and present of the global family story.” She urged religious leaders and faith-based organizations to bring their moral voice and experience to bear in caring for these vulnerable people, and she said that faith groups are in a unique position to focus on people, rather than politics. “You tirelessly assert the human rights and dignity of migrants and refugees, independent of national interests and agendas,” said Mohammed.

The statistics on migrants and refugees are staggering. According to the UN, the world is currently experiencing a movement of people, driven from their countries by conflict, poverty, and many other challenges, that is unprecedented in human history. Last year saw an estimated 65.6 million people displaced from their homes. A vast number of these—almost 50 percent—were children and young people.

Dr. Ganoune Diop, director of Public Affairs and Religious Liberty (PARL) for the Adventist Church, was one of the main organizers of the symposium, and he told attendees that the event was intended to be more than “just talk.”

“We not only want to make a difference on the ground, at the grassroots level, but we want to help change the narrative about migrants and refugees,” said Diop.

He said that the Adventist Church remains committed to helping alleviate the suffering of displaced people, and he also spoke about the Adventist Church’s “portfolio of services”—including its focus on health care, its world-wide education network, and the global humanitarian work of the Adventist Development and Relief Agency (ADRA).

Syrian refugee Sana Mustafa gave an impassioned presentation, introducing a theme that was echoed by speakers throughout the day—the danger of “de-humanizing” refugees and migrants. Mustafa, separated from her family who fled the war in Syria, has discovered, firsthand, how disorienting and impersonal the refugee experience can be.

“Please, treat refugees as individuals, not as ‘complications’ or ‘social issues,’” she said. Mustafa noted that news reports in the West rarely told stories from the point of view of individual migrants or refugees, but instead tended to focus on the social challenges that the newcomers presented to a community.

She said that faith-based groups could play a key role in combatting prejudice and discrimination, educating citizens of host countries about the trauma displaced people have endured, and helping people to open their hearts to welcome migrants and refugees.

“Faith plays an important role in the life of many people, and therefore in times of distress, they often gravitate toward it,” said Duffy. He cited a case in mid-2016 when up to 5,000 people at a time took shelter in an Adventist compound in South Sudan as civil violence gripped the region. ADRA worked to provide food, clean water, and emergency health care to the men, women, and children who crowded into the facility.

This week’s symposium took place against the background of continuing deliberations at the UN about the plight of migrants and refugees. It marks the fourth time the Adventist Church has helped bring together faith-based groups with representatives of the international community at the UN to discuss significant global issues. Previous events have focused on topics such as peace-making and religious extremism.

Dr. Azza Karam, Senior Advisor on Culture and Social Development at the United Nations Population Fund, and a key partner in the organization of the symposium, was the final speaker. She highlighted some of the themes that had emerged throughout the day, and said that it was clear that faith-based organizations have diverse and critical roles to play in engaging with migrants and refugees. Karam added that the symposium series had, over the past four years, sparked a unique “journey of communication and collaboration” between faith-based groups, non-governmental organizations, and the international community.

Speaking after the event, Diop said that the UN symposium series has provided an unprecedented opportunity for Adventists to contribute to the public discourse in a meaningful way, and he said that planning has already begun for a fifth event to be held in January next year.

“As Adventists, we offer perspectives grounded in biblical values, and shaped by our conviction that every human being has been endowed by the Creator with infinite worth and dignity,” says Diop.

Among the many high-level presenters at this week’s symposium were Adama Dieng, the UN Secretary-General’s Special Advisor for the Prevention of Genocide; Professor Afe Adogame, Maxwell M. Upson Professor of Christianity and Religious Studies at Princeton Divinity School; Rev. Dr. Liberato C. Bautista, Assistant General Secretary for United Nations and International Affairs for the United Methodist Church; Rudelmar Bueno de Faria, General Secretary of the faith-based humanitarian coalition ACT Alliance; Jason Cone, Executive Director of Doctors Without Borders in the United States; Dr. Elizabeta Kitanovic, Executive Secretary for Human Rights of the Conference of European Churches in Brussels; and, Martin Mauthe-Kater, Counsellor for Migration and Sustainable Development at the European Union Delegation to the United Nations.