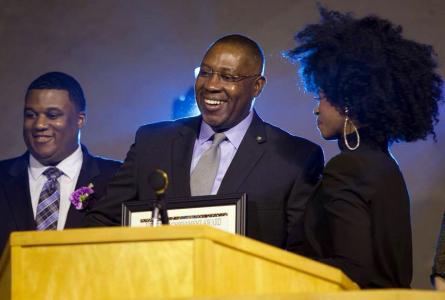 Terry Johnsson, vice president of mission integration for the Pacific Northwest Region of Adventist Health in Portland, Oregon, was the first Adventist recipient of the 2018 Lifetime Achievement Award from the city of Portland. The award was presented to him at the 33rd Anniversary Celebration of the “Keep Alive the Dream” Martin Luther King Jr. Tribute held in Portland on January 15, 2018.

Johnsson, who grew up in Portland, attended Portland Adventist Academy. From a young age he struggled with severe dyslexia, but did not let that challenge dissuade him from pursuing his dreams. He became the first African-American from the state of Oregon to serve as a U.S. Air Force Presidential Honor Guard at the White House for three presidents. He has earned two undergraduate degrees, a master’s degree, and a doctorate. Before joining Adventist Health in 2015, Johnsson served as the senior radio chaplain and operational manager for WGTS-FM, the Adventist, highly-rated contemporary Christian music station in Washington, D.C.

Johnsson has also founded Student Healthcare Leaders, a non-profit high school mentoring program, and hopes it will provide high school students the opportunity to learn more about the healthcare field. He and his wife, Kara, who serves as a pastor of the Sunnyside Church in Portland, are individually and collectively involved in ministry that builds community connections.

This article was written and originally published by Gleaner/GleanerNow.com, the North Pacific Union Conference’s (NPUC) news website. It is reprinted here with permission. Photo courtesy of Oregon Conference.