Book Review: Out of Adventism: A Theologian’s Journey 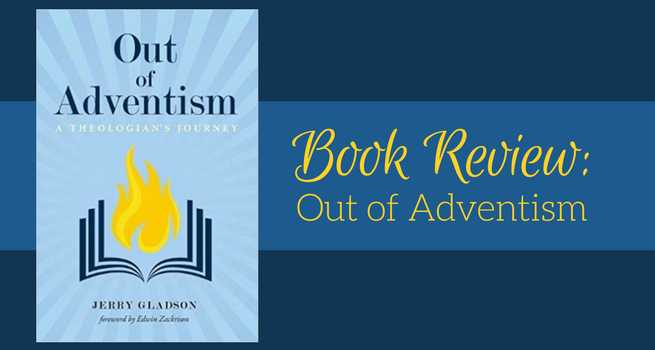 During the Nixon era, under threat of losing her paper and going to jail, The Washington Post’s Katherine Graham published the Pentagon Papers. Why did she do it?

“Once she knew the truth, all else became secondary, including losing her paper, her freedom and all she most cared about.”

A similar conviction animates Dr. Jerry Gladson’s memoir Out of Adventism: A Theologian’s Journey. It is—at best—a sobering, and at worst, a demoralizing read. Count my reaction among the “worst.” It chronicles his tenure at Southern Adventist University (then Southern Missionary College) from 1972-1984 and his life afterward. He writes with a fierce honesty about his personal and professional anguish, his disappointment with specific persons, and the horror of watching his family unravel. An earlier effort felt incomplete to Gladson;1 he now feels he has said it all. A number of current and former Seventh-day Adventist scholars who read this volume will respond sympathetically.

He describes the book’s controversial agenda:

As a cautionary tale, my story is a plea for Seventh-day Adventism and denominations like it to be more open and transparent in their internal political and theological difficulties. It is a plea for denominational openness to change, even when it involves critical, theological matters. No doctrine or belief should be held to be beyond revision, especially when new discoveries in theology or biblical studies plead for it. Even though I have been out of Adventism for more than two decades, I still hold out the hope—albeit slender—that it might eventually change in these respects.2

Gladson began his early life in the church as a deeply conservative believer who immediately felt a call to pastoral ministry. Deep joy filled him during his years as a church pastor. Eager for more learning, he enrolled at Vanderbilt University for an MA in Old Testament, never expecting to be invited to join Southern’s Religion Department. He accepted and was provided financial support to complete his PhD at Vanderbilt in the same area. As one should expect, this experience forced him to ask questions about well-established Adventist doctrine based on Scripture.

Church leaders and laypeople cannot easily imagine what the process of graduate work in the Bible really entails. If you have read the Bible for its spiritual help and clearly articulated theological teachings (this should not be interpreted as intellectual arrogance), such study—while important—offers only a surface awareness at best. Knowing the original languages and how to use them, understanding the history of the transmission of the biblical manuscripts and their cognates, is humbling and surprising. Only then can you appreciate the “shock and awe” felt by a young Adventist scholar who encounters, for the first time, what appear to be significant challenges to even a few of his beliefs. He instinctively seeks out other scholars grappling with the same issues, confident that there must be some way to deal with them.

Platitudes, simplistic explanations, and dismissive comments about being corrupted by “worldly schools” do not suffice. Gladson writes gratefully of faculty colleagues at Southern and elsewhere who, while not threatened by his concerns, nevertheless felt compelled to address them in surreptitious conversations. To his further surprise, he was appointed to the Biblical Research Committee of the General Conference (BRICOM), the group of scholars tasked with reviewing any and all questions about Adventist theology. “At last,” he thought to himself, the group working with or writing Adventist scholarly papers, would address his nagging questions. To his dismay, it was not to be.

The more deeply I became involved in the work of BRICOM, however, the more disappointed I was. When the really difficult, intractable questions about Adventist doctrine arose, the committee turned to scholars who would defend—usually without flinching—the denomination’s traditional teaching…When someone dared to present a paper at variance with the church’s teaching, it was quickly tossed into a dead file at BRICOM office, never to resurface again.3

During his tenure at Southern, other Adventist scholars in biblical, historical and theological disciplines raised similar questions on their campuses. “Is our traditional approach to the Bible (as well as the writings of Ellen White4), a disservice to the church?” “What does the doctrine of ‘inspiration’ mean and how much (and what kind of) authority do these writings possess? The major controversy at that time centered on the translation of the phrase “and then shall the sanctuary be cleansed” in Daniel 8:14. Adventist understanding of the heavenly sanctuary depended on that phrase, one of the issues that gnawed at Gladson who had carefully studied the Hebrew text.

What came next fanned irksome questions into a firestorm. A relatively quiet distress limited to scholars (even some who edited the SDA Bible Commentary), became a deafening community argument.

Dr. Desmond Ford, a professor at Pacific Union College, raised the sanctuary issue at a meeting sponsored by the local Adventist Forum on campus. His theme: the difficulties with the traditional Adventist interpretation of Daniel 8:14 and the “cleansing of the sanctuary” must be confronted, notwithstanding Ellen White’s interpretation of this passage. When a recording arrived at General Conference headquarters in Takoma Park, Maryland, alarms were sounded. For those exposed to the sanctuary class taught by Dr. Edward Heppenstall at the Seminary, this was not news, though Dr. Ford melded that passage with other equally charged issues.

As expected, questions about the meaning of “inspiration” surfaced right away, threatening the accepted views of inspiration and prophetic authority. Spectrum published evidence pointing to Ellen White’s borrowing material for a number of her books; Adventist pastor Walter Rae published a controversial book with the inflammatory title The White Lie. The English-speaking Adventist world was caught off-guard and the pressure mounted for church leaders to do something. Theology professors on many campuses began to feel their support evaporate from church leaders, selected college officials and students, and even community members who once praised them. Gladson and others at Southern had reason to worry.

At this point, the narrative shifts from his theological questions to his very survival as a theology professor at Southern. I found it painful to read, partly because others I knew well also endured a similar torment during that time. A parenthetical observation: as long as theological controversies that might erupt into loss of confidence in some traditional doctrines are kept in-house, informed leaders have more room to pace a response that will help the church grow more deliberately towards a new understanding. Ford’s public presentation took that option away, if it was ever a viable one.

Church administrators at the highest level decided to invest treasure and time to give Ford and the issues a fair hearing; hence, the expensive and infamous Glacier View Conference.5 The hopes that preceded the conference approached euphoria. Scholars believed that leadership would now allow time to resolve the issues theologically, rather than administratively.

While Gladson was not present the first week of Glacier View to hear Ford, he was there for the second week of theological consultation which included many of the earlier participants. When he arrived, he reports, a significant contingent of scholars voiced betrayal. They charged church leadership with abandoning their promises to allow more study and conversation about Ford’s issues. However, at the conclusion of the conference, an unannounced meeting of a select group voted to discipline Ford. When that became known, Glacier View morphed from a step toward theological maturity to a Pearl Harbor that elicited an angry response.

In the wake of that decision, administrators and lay people created litmus tests to evaluate the orthodoxy of theology professors and pastors. Once supportive of their religion faculties earning terminal degrees at non-SDA universities, leaders turned toward the doctoral programs newly developed at Andrews University. Future hires to teach religion would largely come from that program. Current scholars who kept raising questions were mortal threats to church harmony and unity. Why they were regarded that way, as discussed earlier, portends increasing strife for the denomination as we go forward. In Gladson’s case, as in most of the others, school and union leaders not trained as well as their newly minted scholars perceived danger everywhere. Their suspicions that he would “corrupt” his students ultimately made his situation at Southern untenable. Rumors of heterodoxy, fed by respected scholars leadership trusted, persuaded administrators that such professors were a danger to the community.

Like Caesar’s crossing a river into Gaul precipitating the Roman Civil War, Glacier View became an Adventist Rubicon. Reliable estimates of the pastors and laypeople who simply left or were forced out numbers in the tens of thousands. In Gladson’s situation at Southern, a few students, caught up in the frenzy, secretly taped their efforts to bait Gladson into committing himself on “controversial” questions. Refusing to comment was itself “proof” of heresy. Gordon Hyde (not trained in theology) and Gerhard Hasel (himself an Old Testament PhD from Vanderbilt) are named as those most responsible for his eventual termination.

An exodus of religion scholars began in a number of our colleges. Those offered pastoral roles, like Dr. John Brunt,6 went on to become deeply appreciated preachers who could extract from the text “things new and old.” A few, before or in the midst of the uproar, went into college administration such as Drs. Niels-Erik Andreasen, James J.C. Cox, and Lawrence T. Geraty. No such options were offered to Gladson, which strikes me as a scorching ethical failure. Emotional, unfounded charges became “fact.” No reasoning, pleading or counter-arguments could alter what was about to occur. It was time to purge and “purify,” not get sentimental about termination procedures or the future of those being exiled.

In the end, like Katherine Graham, the moral dimension would not allow him to compromise by pretending all was well. “How could such an approach be a search for truth?” Gladson cried. “Wasn’t it a sham?”7 Unable to openly and honestly enter into conversation with other biblical scholars (which would unquestionably have been helpful if not dispositive of his concerns) and church leaders who would listen, Gladson had no choice: he felt compelled to legally challenge the termination, including the illegal practice of recording his conversations. Those who had done so were willing to do the immoral and illegal in order keep the church “purified” of these liberal scholars.

Shortly thereafter, Gladson was done. Alone and still passionate about finding truth, he found another community which embraced him and his quest enthusiastically. The rest of the book details his post-Southern life, with all its blessings and anguish. Still, he concludes his volume with sanguinity.

Will Gladson’s courageous book teach us anything? Will humility about what we assume is “settled” ever soften our approach to those who ask serious questions? Can we move from the certainty that besets us to truly hear these words of Jesus: “Judge not that you be not judged?”

One can only hope.

Notes & References:
1. A Theologian’s Journey from Seventh-day Adventist to Mainstream Christianity.
2. Loc. 142 of 6986, Kindle Edition.
3. Loc.  877 of 6986 Kindle Edition.
4. See the following for detailed information:  https://spectrummagazine.org/article/bonnie-dwyer/2009/05/10/most-significant-article-spectrum-has-published%E2%80%94so-far; Alden Thompson, Inspiration: Hard Questions, Honest Answers.
5. The Glacier View Conference was preceded by a committee which met with Ford for an extended period of time, reviewing his lengthy document written for the conference participants.
6. PhD in New Testament from Emory University, taught at Walla Walla College for many years, including a stint as Academic Dean.
7. Loc. 877, Ibid.