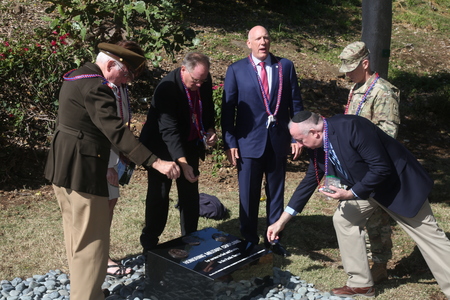 Dick Stenbakken’s dream of placing a memorial honoring chaplains from the Army, Air Force, Navy and Marines, past and present, at the National Memorial Cemetery of the Pacific became a reality on December 13, 2017, in Honolulu, Hawaii. The dream had its beginning in 1970.

The first time Chaplain (Colonel) Richard "Dick" Stenbakken, United States Army, retired, visited the National Memorial Cemetery, located in Punchbowl Crater, it was November of 1970. “I was struck by the serene beauty and profoundly majestic silence of the grounds. It was a breath of fresh air for the soul,” he recalled. The neat rows of markers well reflect the crisp orderliness of the military members commemorated on these grounds.

“To me,” Chaplain Stenbakken commented, “the contrasts between the stately serenity here and the cacophony of Vietnam were vast. Looking across the meticulously manicured grounds, I saw fresh scars in the grass. Those scars were a vivid reminder that after a brief R & R in Hawaii, I had another 100 days ‘in country’ to fulfill my tour in Vietnam.”

What began as a dream became a journey full of miracles. On a sunny Hawaiian day, he saw the conclusion of two years of phone calls and piles of paperwork, making this memorial a reality. Stenbakken donned a WWII chaplain's uniform for the dedication events.

Thinking back to the 1970 stroll in the Punchbowl Cemetery, Stenbakken describes how, “seeing those very fresh graves caused me to ponder how many of ‘my troops’ were here, or might yet be here. Not as visitors, like myself, embraced by the warm Hawaiian sun and caressed by the soft trade-winds, but as names etched in snow-white marble glistening in the sun, watered by the tears of family and friends. Those thoughts uniquely encouraged — and deepened — my commitment to ministry as an Army Chaplain.

“And, yes — there was the thought that my name could be on one of those white marble markers too. The thought was both chilling, and energizing. Chilling because I still had 100 days to go in Vietnam, and life is never sure in a combat zone. Energizing, because I still had time to provide meaningful ministry to my troops.

“I cherish the reflections of that day, and my experiences in Vietnam. They helped me focus on both the unspeakable beauty, and the utter fragility of life. They helped me look eye to eye at my own mortality more deeply than ever before,” he reminisced.

Speaking at the dedication service, attended by a roster of chaplains, were Chaplain (Major General) Paul Hurley, Army Chief of Chaplains (Roman Catholic); Chaplain Jack Lea, Director of National Conference on Ministry to the Armed Forces (Methodist); Derek Jones, Endorser for the Anglican Church; Sarah Lammert (Unitarian Universalist Endorser); Rabbi Irving Elson, Director-Endorser of the Jewish Welfare Board, Stenbakken, former Director-Endorser for the Seventh-day Adventist Church, who said that the placement of this memorial, “honors every Chaplain across the Pacific from all branches of the military and multiple faiths.”

“You would be hard pressed to have a more diversified group involved in the process, product, and dedication of a marker commemorating the ministry of military chaplains. The gathered group typified the mixture of chaplains in the military,” stated Stenbakken, who himself served 23 years on active duty as an Army chaplain, including Vietnam, before becoming Director of Chaplaincy Ministries and Military Endorser for the Seventh-day Adventist Church. Chaplain Paul Anderson, current Director of Adventist Chaplaincy Ministries for North American Division was present for the event. ACM was also involved in funding of the marker, along with others.

Reporting on the ceremony for the Pacific Stars and Stripes, the official military newspaper of the Pacific region, Staff Sgt. Melissa Parrish quoted Stenbakken, who devoted two years toward this project, culminating in the dedication:

It is essential that we remember what chaplains have done in the past, what chaplains are doing now and that we look into the future. Chaplaincy is the core and the heart of the values in any military branch. This memorial is also a reminder to the community that the chaplains were there and are there for their family members who serve. I hope this will be an ongoing reminder of the commitment and ministry for Chaplains. Their service has to be rock solid and grounded just like this memorial.”

In honor of Chaplains fallen in combat, Rabbi Irving A. Elson, Captain, U.S Navy, retired, Director of the Jewish Welfare Board Jewish Chaplains Council, read the famous eulogy delivered by Rabbi Roland B. Gittelsohn. The eulogy was given for those who died at Iwo Jima and was read into the US Congressional record in 1945:

Here lie men who loved America because their ancestors’ generations ago helped in her founding. And other men who loved her with equal passion because they themselves or their own fathers escaped from oppression to her blessed shores. Here lie officers and men, black and white, rich men and poor, together. Here are Protestants, Catholics, and Jews together. Here no man prefers another because of his faith or despises him because of his color. Here there are no quotas of how many from each group are admitted or allowed. Among these men there is no discrimination. No prejudices. No hatred. Theirs is the highest and purest democracy.”

In honor of the mission of chaplains, Chaplain (Major General) Paul Hurley, Chief of chaplains of the U.S. Army, reminded everyone of the importance of remembering the legacy of those that came before them in order to prepare for the mission ahead.

The Punchbowl stone marker came to California by cargo ship from India. It was a special jet-black, sloped surface stone weighing 1,600 pounds on which three bronze 3-D plaques representing the Navy, Army, and Air Force chaplaincy offices, were placed. The bronze castings were made through a company in Loveland, Colorado, where Stenbakken lives.

The white legend engraved in the stone reads:

Honoring Military Chaplains for service to God and Country in the Pacific Theater; Placed by the National Conference on Ministry to the Armed Forces and the Jewish Welfare Board.

At the ceremony, those present sprinkled sand from Iwo Jima — brought for the occasion — around and on the memorial as a fitting tribute to chaplains who served in the Pacific Theater.

The miracles of the initiative included “nail biting” moments as the stone came in by boat late, and there were problems getting the shipment through customs. After many hours of phone calls, air shipment through Los Angeles was secured 15 minutes before the air freight office closed. The stone flew overnight from LAX to Honolulu; the engraving company picked it up and worked over the weekend to do the engraving and put the bronze seals in place. They then delivered it to the Punchbowl on Monday morning, and it was set in place in preparation for the ceremony.

“Getting the stone through customs, through the California fires, to Hawaii, and having it done in time for the ceremony was nothing short of a series of miracles,” said Stenbakken. “It would have been very easy to give up, but after nearly 100 phone calls, and tons of coordination — and by the grace of God and answered prayer — it happened.”

Stenbakken noted that “the VA has very stringent requirements for placing memorials at cemeteries under their control, so by the time the application and all supporting documents were gathered, the packet was 88 pages long. It took several months just to get the paperwork in place.”

On December 13, after two years of planning, drawings, research, phone calls and emails, the concept became a reality. What began with a reflection during a stroll in 1970, had become a dream fulfilled.

Rajmund Dabrowski is the communication director for the Rocky Mountain Conference. This article originally appeared on the RMC’s website.