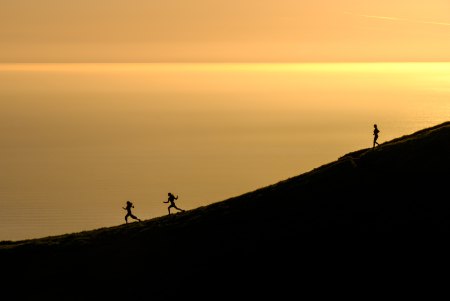 If you trap the moment before it's ripe
The tears of repentance you'll certainly wipe:
But if once you let the ripe moment go
You can never wipe off the tears of woe.
— William Blake, Riches

Some of us are constantly caught between exhortations to seize the day and those of a more cautious nature. We hesitate, we muse, we ponder, while all around us (so we suppose) others are grabbing the carp from under our noses. Our culture is made of two types of people: those who act deliberately and those who deliberate and then act. The first group gets all the headlines but the second group meets its deadlines.

It’s hard not to like spontaneous people, but I suppose if they were around long enough the strains might begin to show. I remember being on a flight from San Francisco to London one summer during my college years. I boarded with a suitcase overhead, a small pack under the seat, and another suitcase stowed on board. Before the flight I fell into conversation with a group of three people my age, two guys and a girl. One of them had driven the couple to the airport and was seeing them off. But while we talked he suddenly decided to come along. Whipping out a credit card he bought a ticket on the spot (this was long before Homeland Security and two-hour check-in times) and boarded with nothing but his wallet and the clothes he came in with. I don’t know if he made it through customs at Heathrow: not many people carry their passports around with them.

I was impressed. There I was, prepared for every contingency, enjoying the moment of boarding as the culmination of months of planning, saving, anticipating, and striving. And this guy comes along and whoosh! Off he goes with nary a thought for tomorrow. Aside from the benefits of an apparently unlimited line of credit from his parents, he seemed unencumbered by responsibilities or plans. He wanted it, he got it. Seize the carp indeed.

In a spiritual sense it’s the eternal struggle between reason and faith, or as Kierkegaard would put it, between speculative philosophy and passion. Speculative philosophy is the result of objectivity in thinking, says Kierkegaard. He’s against it. Objective thinking about the meaning of life, the gospel, about religion and Christianity, can only lead to a certain cold detachment. It doesn’t even come close to a quest for eternal happiness, which is, Kierkegaard says, the whole point of being a Christian.

This has been on my mind, fitfully, for years. Kierkegaard was my sparring partner in college and graduate school, the weird little Dane with enormous ideas, a Socrates for his time, messing up the neatly coiffed hair of the respectables of his society, and poking me in the eye with his insistence on the irrationality of faith.

I wasn’t about to blink, having fallen under the spell of Albert Camus’ cool lucidity and C. S. Lewis’ persuasive reasoning. In fact, nothing in my cultural or religious upbringing could have played along with Kierkegaard. In my brand of 19th-century American evangelical Protestantism we were taught to regard the emotions as suspect. Passions were to be curbed, enthusiasms channeled into acts of obligation. The Bible was a sourcebook, a divinely-inspired Wikipedia of spiritual facts, suitable for going to war against unbelievers and lighting up, like Bilbo’s sword, whenever we found ourselves near where the scornful sat.

However, the caution against emotion did not apply to responding to the pleas of pastors to give up our sinful desires and come to Jesus. Every trick in the book—and I can say this now without rancor—every trick in the book could be employed to bend us toward the straight and narrow path. After that, of course, it was mostly a matter of proof-texting our way through our pilgrimage of religious progress.

There didn’t seem to be an alternative between a sober, respectable religious life and a fanatically driven one. Since fanatics were unpredictable it was better to err on the side of reticence and reason. Jesus loves me, this I know, for the Bible tells me so. Faith is belief, belief is assent to the truth, the truth is in the Bible, now go and study.

But that wasn’t nearly good enough for Kierkegaard. “Christianity is spirit, spirit is inwardness, inwardness is subjectivity, subjectivity is essentially passion, and in its maximum an infinite, personal, passionate interest in one’s eternal happiness,” he says. You leave everything to reason and objectivity, you end up with indifference toward the one thing most important: your happiness in this world and the next.

Decisiveness, says Kierkegaard, only comes to those who care, who actually care about how to live in this world. If whatever (or whomever) you put your trust in does not churn up your soul then you are a dead man walking.

Something in me really resonates to that chord. I admire that vigorous, muscular spirituality. I think it’s possible to be passionate about what really matters without becoming an avenging angel wielding the sword of the Lord. God save us from crusades and crusaders.

But I am wary of this word “passion.” In our time it is a “God-word,” a term that everybody uses and approves of without really knowing what they mean. It is often used as a substitute for education and training, as in “You don’t need college. If you have passion enough you can accomplish anything you put your mind to.” Well . . . maybe. Sometimes it’s a synonym for hard work, other times it’s a kind of blind force that bores through any barriers warning of the cliff up ahead. And sometimes it’s just a cover for sublime silliness.

Perhaps if we remembered that “passion” comes from the Latin word passio, which means to suffer, to submit, we would be more judicious in our use of it. Kierkegaard had it right: if you’re going to be passionate about something be prepared to suffer. To suffer means to put aside anything that would distract you from the commitment. You are putting your self into this, not just some passing whimsy.

In matters of the heart what matters is the bond between two people. Where there’s a giving of one’s true self there is suffering—along with consuming joy, satisfaction, pleasure, and desire.

Which brings us back to Blake’s quatrain about our constant dilemma: do we stay or do we go? Leap or turn away? Play or watch? Experience or observe? Maybe that is what the passionate life is about: the suffering we feel in that moment of indecisiveness when we awake to what we long for with all our heart.

We are never so alive than when we gather ourselves to leap.