Is This Thing On? NAD Leaders Dialogue with Students at Oakwood University

Is This Thing On? NAD Leaders Dialogue with Students at Oakwood University 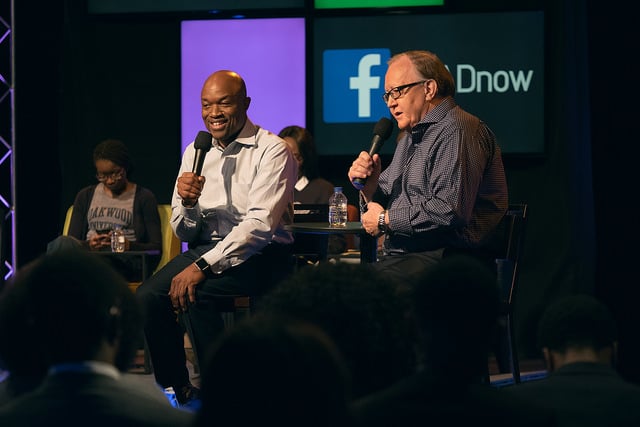 On December 2, 2017, Oakwood University students and student government leaders from colleges across the North American Division (NAD) dialogued with church leaders during the second Facebook Live Event titled “Is This Thing On?” (ITTO). The almost two-hour Q&A session with Dan Jackson, president of the Seventh-day Adventist Church in North America, and Alex Bryant, executive secretary, was held in the Leroy & Lois Peters Media Center on Oakwood’s campus the evening before the start of the 2017 Pastoral Evangelism and Leadership Council (PELC).

The unscripted program in Huntsville, Alabama, on the campus of the Adventist Church’s only historically black college/university (HBCU), featured questions taken from the studio audience and Facebook and Twitter. Social justice, race relations, regional conferences, church policy and governance, and women’s ordination topped the topic list.

“Racism and social justice is a subject that is very relevant to young people today,” said Andrew Taylor, Oakwood University student and United Student Movement president, in the days just before the event. “I’m excited to have an open discussion regarding this important topic with church leaders and college students.”

“I am planning a 4-part, Jesus-centered, community event/conversation in Tacoma, [Washington], sometime in the spring regarding social justice, racism, white privilege, and poverty,” tweeted Benjamin Orian, as the live event streamed. “It is a serious conversation that the church needs to be having.”

David Hamilton, a senior Mechanical Engineering major at Tennessee State University, was glad he came to ITTO with his father. “I’ve never experienced anything like it in the Adventist Church. It was refreshing to see this kind of transparent and open discourse. A lot of the questions on my mind were asked,” he said. “It’s good that the church is giving millennials the space to start discourse like this. More events like this are what will help keep us in the church.” Hamilton applauded the effort to use social media, where his generation communicates and often exists, to “bridge the gap.”

Minutes after the event aired, Facebook reports indicated that the video broadcast received 11,300 views, 240 shares, and about 2,000 reactions and posted comments, which included 975 questions and statements regarding the conversation. More than 80,500 Twitter accounts were reached through almost 400 tweets and retweets.

The NAD Office of Communication also created a Snapchat geo-filter for use on the Oakwood campus on event day. More than 3,000 views, 520 swipes, and 89 uses were recorded after the event. “Snapchat is another way to connect with young adults on social media,” said Julio Muñoz, ITTO host and producer. “We hoped our filter would help create awareness of our live event here at Oakwood and for future dialogues.”

In addition to Oakwood students helping behind the scenes during filming, four students were tasked with working as social media "ambassadors" during the show. These students interacted with Muñoz periodically throughout the broadcast, sharing viewer statistics and questions that Jackson and Bryant answered.

“I am extremely grateful to have had the opportunity to be a part of this very necessary conversation,” said Loriann Lawrence, a junior Interdisciplinary Studies: French, Art & Marketing major who helped as a social media ambassador on the ITTO show. “The dialogue between corporate leaders and young adults are far and in between so when opportunities like these arise, it shows that we are moving in a good direction.”

“Is This Thing On?” is an intentional effort to reach as many young adult Adventists in North America as possible—and engage in a conversation on issues important to them.

“This discussion should not and, I know, will not end here,” Lawrence added. “Inevitably I felt closer to our leaders by being in the same space, asking any questions we [young adults] had. Coming from that, I can better relate—and come from a place of more understanding when I see certain things happening in the church.”

After the event, Jackson expressed his interest in continuing the dialogue. “I believe this generation [of millennials] is uniquely poised to finish the work," said Jackson. “We need to engage our young adults in open and transparent conversation on issues that are important to them. They need us, but we need them more.”

Arion McCullough, sophomore Marketing and Broadcast Journalism major, and one of the social media ambassadors, said, “I learned a lot of good information about where our church stands on certain topics. The candidness of the topics and answers surprised me. On the church’s stance on social justice in particular, Jackson gave his honest opinions. . . . Makes people my age more comfortable with talking to church leaders. It shows that the older generation does care about our questions and concerns.”

Plans are underway for another event in the spring, and questions may also be answered in the interim—use #NADnow when tweeting/posting questions.

Watch the “Is This Thing On?” video on the NAD’s Facebook page here or visit www.ittoshow.org.

This article was written by Kimberly Luste Maran and was originally published on the North American Division’s website.

Image: "Is This Thing On?" 2, from the campus of Oakwood University in Huntsville, Alabama, was live streamed on Facebook. Dan Jackson, NAD president, and Alex Bryant, executive secretary, answered questions from the studio audience of college students. Photo by Pieter Damsteegt.