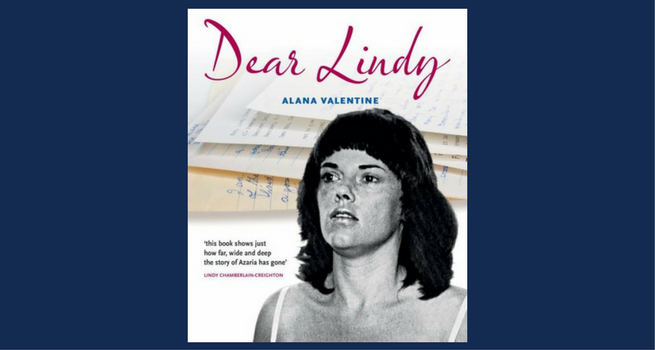 Lindy Chamberlain-Creighton’s 30 Years of Received Correspondence Featured in New Book. Lindy Chamberlain-Creighton, Australia's most divisive parent, has shared many of the 30,000 missives she received in the 35 years since the death of her baby Azaria with author Alana Valentine. "She always still seems to be on trial," the author of Dear Lindy: A Nation Responds to the Loss of Azaria told news.com.au. "People come and ask what happened that night; it's incomprehensible." Valentine's annotated book of letters sent to Lindy over the decades lays bare how Australians have treated the 69-year-old since her nine-week-old daughter Azaria was taken by a dingo at an Uluru campsite in 1980. Despite everything the couple went through, Valentine notes that the worst letters were only a tiny percentage, and that Lindy received far more words of sympathy. "I hope people will take heart that there was kindness," she said. A large proportion of the letters are apologies from people who had originally disbelieved her tale. "I am or should I say was, one of those awful people guided by public opinion that you were guilty," reads one letter after Lindy published her autobiography. "Your book made me cry several times.” Valentine believes the collection of letters are an interesting display of mass contrition. The author says the letters have become the bereaved mother's record of her lost daughter. She still receives around 1,000 emails every year. From The Chronicle, “‘Torture in hell’: Vicious taunts in cruel letters.”

Lesbian Former Adventist Creates New Bible App. Crystal Cheatham came up with the idea for a new gay-friendly app called “Our Bible” to make LGBTI Christians feel welcome and affirmed. It features a gender-neutral God (traditional Bibles reference God with male pronouns), pro-women sentiment, and centers on people of color. She told PBS, “When I came out, I was told by [Seventh-day Adventist] ministers so far above me that I couldn’t be an out lesbian and also be on the stage as a leader, and it crushed me. I had to decide between this love for my God and my personal identity,” she said. The app provides a few distinct things: progressive scriptures, library of Bibles and translations, daily Bible verses, meditation, and social media. Makers of the app hope to launch it just in time for Christmas, between December 25-30 this year. From Gay Star News, “New 'Our Bible' app is super gay-friendly and refers to gender neutral God.” Read Crystal Cheatham’s interview with Spectrum here.

Fijian Church Pastor Promotes Healthy Living and Community Involvement with His Congregants. Christchurch Fijian Seventh-day Adventist Church pastor Jesel Royokada entered the Star Media City2Surf last year. Now, he has asked his congregation of about 80 to get involved in the event as a way to connect with other cultures. “We come from the islands, and sometimes we do things in our own island groups, but it is good to get involved with the rest of the community,” he said. They learned about the event by Healthy Families Christchurch, part of a nationwide Government initiative aimed at helping New Zealanders live healthy, active lives. The event is split into two sections – 6km and 14km. From Star.Kiwi, “Leaping Minister embodies the City2Surf spirit.”

75 Years of Marriage for Nebraska Couple Includes Commitment to Adventist Education. Garth and Ruth Meyers of Norfolk, Nebraska, are celebrating 75 years of a happy, successful marriage. They worked extra jobs, Franklin said, so they could send their children to Seventh-day Adventist schools through high school. To make extra money, the couple cleaned an office every night and on the weekends. After supper, the children washed the dishes, and the couple went to their cleaning job, according to their daughter, Donna Franklin. Garth also shoveled snow for people to make a little extra cash. They didn’t buy a car until 1958, 16 years after they married in 1942. Garth doesn’t have the magic formula for a successful marriage, but their daughter offered a few insights. “I’ve never seen them have a fight…and Christ was always the center of their life,” she said. From Norfolk Daily News, “Times have been tough, but marriage has always been good.”

Massachusetts Church Members Create 18,000 Meals for Disaster Victims and Others. Members of the Foxboro Seventh-day Adventist Church in Massachusetts are able to make an impact on hunger around the world. The church donated $2,500 to the Outreach Program, an organization that supplies all the materials for packaging the dry meals, and during six hours on November 19 people came from all over to lend a hand. Nine thousand meals are heading to Puerto Rico, and 2,500 meals will go to St. Thomas, both islands where people are still in dire straits months after the islands were decimated by two hurricanes. Another 3,500 meals will be delivered to the New England Home and Center for Veterans in Boston and 3,000 meals will go to the United Way of Greater New Bedford. David Crimmons of Foxborough said, “We always try to encourage our kids and grandkids to be aware and hopefully through community involvement they will be aware.” Steve Aubin from Shrewsbury brought his two sons, Derek, 13, and Ryan, 14 to help out. “I can think of so few opportunities that require such little effort to have such a great impact,” Aubin said. Frankie Vasquez of the Southern New England Conference of Seventh-day Adventists came to pick up a shipment of meals for Puerto Rico. Vasquez said. “Providing this type of meal to families makes a difference because they don’t need a refrigerator. You just add water.” Kids as young as one and adults as old as 99 have participated in the programs. From Wicked Local Foxborough, “Foxborough church packs 18,000 meals for distribution.”