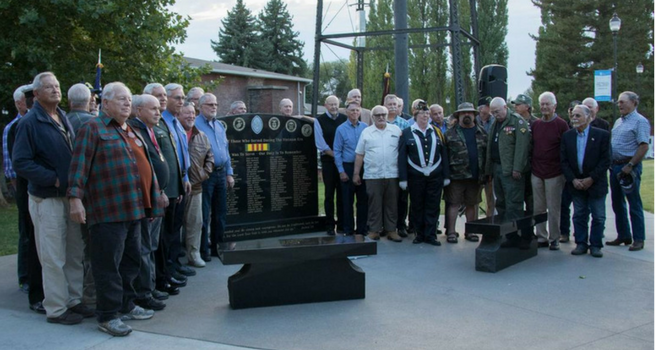 UCA Alums Give Stone Memorial to Honor Their Vietnam War Vets. Upper Columbia Academy alumni have given the campus a black and gold stone monolith (matching the school colors), etched with the names of 124 Vietnam War-era soldiers who are former UCA students. “Everyone on this wall are people that attended (our school),” said UCA Vice Principal Julie Hagele. “Several of them, it was right after their last day in high school they got drafted.” The monument was the brainchild of Army Brig. Gen. Michael Walter, M.D., UCA class of ’67. “We just wanted to have a lasting memorial to thank them for their service,” Walter said. “Many, if not all of (the school’s), veterans were never thanked.” “They were never really given the credit or the welcome home that they should have had,” said Dick Scheib, class of ’66. “It was not a popular war; all of us had issues with people disrespecting our uniforms.” The monument stands near the center of campus in the northeast corner of the prayer garden. From The Spokesman-Review, “A duty to remember: Upper Columbia Academy honors students who served in military during Vietnam War era.”

Nashville Technologist Cites "Pathfinders" Training for Saving Pastor's Life. Minerva Rosa-Gonzalez is being honored for saving pastor Joey Spann’s life after he was shot at the Burnette Chapel Church of Christ. Rosa-Gonzalez, a technologist at the Nashville VA hospital, said her Seventh-day Adventist Pathfinders training and taking her son to Boy Scouts helped her in the moment."It's weird; it was like a movie," she said, remembering simultaneously helping Spann and relaying information to emergency dispatchers on her cell phone."She's extremely humble and didn't think anything about it," Spann said of her efforts to save his life.He observed that the events on Sunday were a stark contrast to the yard sale that Rosa-Gonzalez had organized just a day before to send children from the church to Bible camp. From the Tennessean, “Nashville VA technologist says Burnette chapel shooting made church stronger.”

Detroit Interfaith Conference Includes Adventist Representatives. Seventh-day Adventist representatives joined a Detroit interfaith conference that drew more than 300 guests to SS. Peter and Paul Jesuit Church, exploring challenges facing religious freedom and expression. The conference evolved from plans by the Church of Jesus Christ of Latter-day Saints officials to work with Catholic and other religious leaders in southeast Michigan, said Elder Daniel Dunnigan, who is involved with the group’s churches in the state. The event sponsored by the J. Reuben Clark Law Society Detroit Chapter and Michigan Catholic Conference included a host of faiths, including Roman Catholics, Muslims, Sikhs, Antioch, Russian and Armenian Orthodox, Jewish, Seventh-day Adventist, and Buddhist.Part of the American dream is finding that middle,” said Frank Ravitch, a professor and Walter H. Stowers Chair of Law and Religion at Michigan State University Law School. “It is finding common ground to protect everybody: to protect people of faith, to protect members of the LGBT community and, when necessary, to work very hard together to compromise.” From The Detroit News, “Putting faith in focus — and finding middle ground.”

St. Thomas Adventists Provide Funeral for Known Criminal. The Lloyd’s Seventh-day Adventist Church in St. Thomas hosted a funeral service for Marlon “Duppy Film” Perry, who had been the country’s most wanted person. News that the church held the thanksgiving service and burial for the notorious Perry triggered questions from a number of social media users. Damion Chambers, a spokesperson for the Central Jamaica Conference, one of five conferences within the Jamaica Union of the Seventh-day Adventist Church, responded. “I think the church does not discriminate against individuals or their background in situations as this.” He went on to explain that even though the funeral was for a person who had a checkered past, “the funeral was not for the dead but was to reach out to those who were alive.” From the Loop Jamaica, “Adventist spokesman justifies hosting funeral for ‘Duppy Film.’”

Image: Nearly 40 veterans from Upper Columbia Academy pose for a photo at the dedication of the memorial monument, Sept. 29, 2017. Photo courtesy of UCA alumni.