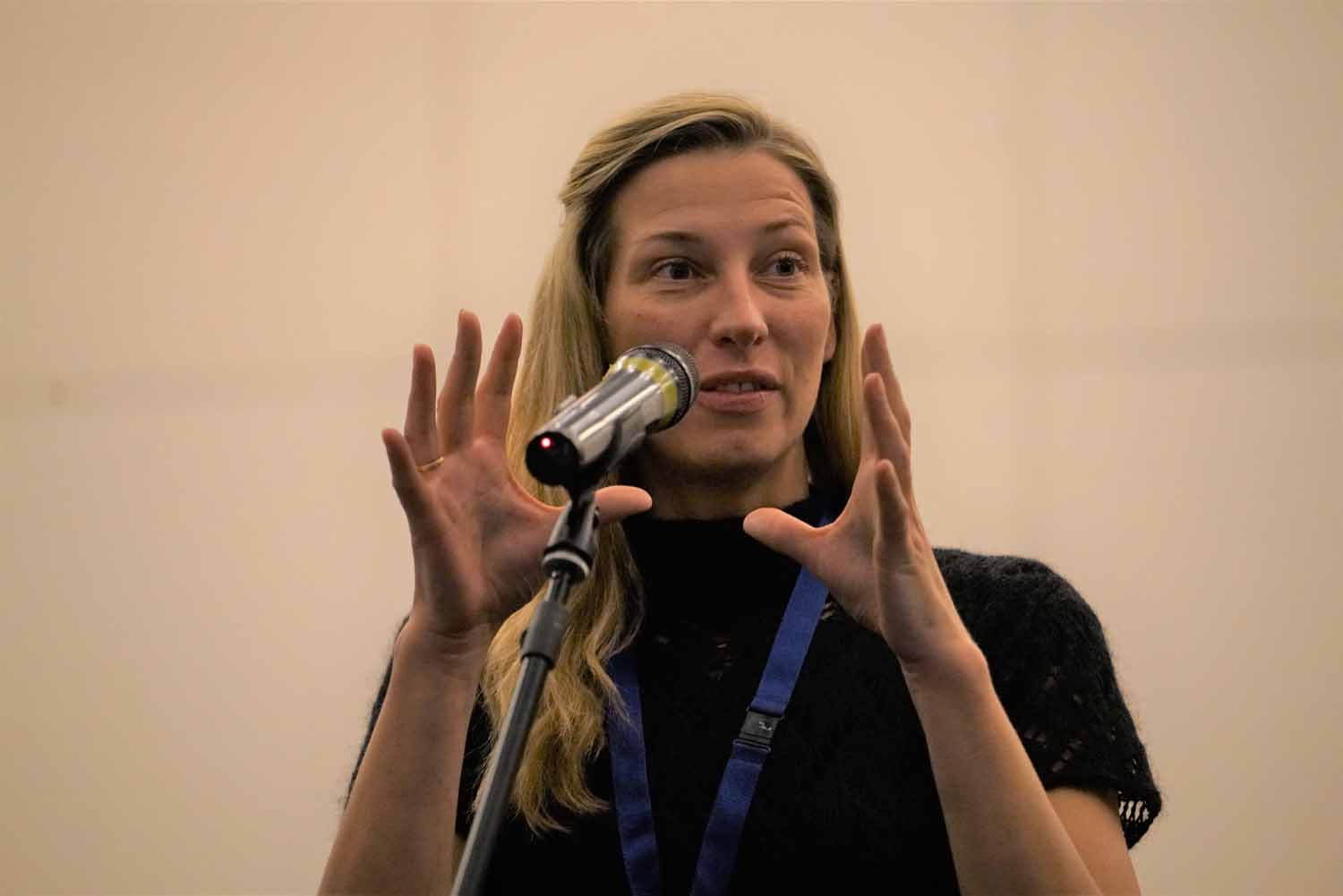 Eglė Miliūnienė is passionate about her faith. After twelve years overseas she has just returned to her home country of Lithuania with her husband and three children. Their purpose? To be a witness within their own community. Her husband, Robertas, is volunteering as a Bible worker while she teaches music, using it as a tool for sharing Jesus. Recently elected to the Lithuanian Conference Executive committee she is also one of 12 lay-representatives from across the Trans-European Division to sit on the TED Executive committee.

Her first time at TED year-end meetings, she confessed to being a little nervous but, she said, “It was very interesting to hear all kinds of reports from different church departments.” But this is not just passive listening and reporting. During the one week of meetings, November 13-19, in Becici, Montenegro, Eglė found herself engaging with the results of various problems and shortcomings, while contemplating on possible ways to improve her church's spirituality and methods of evangelism. In particular, she found herself working very closely with the other 11 lay-representatives, discussing the way forward for the TED and finally presenting three motions that they believe may benefit the discussion of unity in the world church.

She also found opportunity to sing her own composition during the Sabbath vespers program, and to encourage leaders to pray. “It was a very memorable experience and every day brought something new,” she said, adding that “I was expecting more time for prayer during our meetings. I wish that next year we could have more prayer time in the program.”

That was not a criticism, but a thought that leaders will take on-board in addition to the specific times of prayer that had been set during the day, and the many that took time for prayer walks and spiritual discussion during early morning strolls along the stunningly beautiful Montenegrin coastline.

Prayer often came in too as delegates listened to or watched video reports from across the 22 countries that make up the TED.

Pastor Raafat Kamal, TED president, specifically encouraged Union presidents to share a story of mission and hope during their seven-minute reporting slots. The first, from the South-East European Union, brought tears to several eyes as Pastor Đorđije Trajkovski shared a video highlighting what ADRA and the local church in Belgrade is doing to support street children along with families from a local refugee asylum center. ADRA runs a community social center just five kilometers outside Belgrade city center, providing a socially and psychologically stimulating environment, play areas for the children, and craft, language and counselling areas for families. They also run a transport service ensuring that refugee children can be assimilated into local schools.

A report from the tiny 92-member mission in Cyprus shared how they used “Reformation 500” as an opportunity to build bridges with the community. As a result of an invitation in the local media, they even discovered a man who owned a Greek/Latin version of the Bible dating from 1590, probably the oldest Bible on the island. Denmark, Hungary, and others shared how recent Reformation celebrations were a significant opportunity for witness. The TED equally highlighted their innovative Reformation Journey video series that is having an impact far beyond the borders of Europe.

Poland shared the positive results of their Desmond Doss outreach on the streets of five cities and at the Krakow international book fair, and in recent months, they repeated this experience with the story of Martin Luther, while other Unions shared stories of how various forms of total member involvement are impacting lives.

That does not mean that the TED is without its challenges. An aging ministerial work force in some Unions, emigration in some areas, and immigration in others leads to leadership and recruitment issues, while the difficulties of retaining Adventist youth in an increasingly secularized culture focused many minds.

Nurture and Retention was, in fact, the entire focus of the first two days of the meetings, bringing experts and concerned leaders together in a summit that could strategize a way forward. A series of plenary sessions and group discussions led to seven recommendations and a large “ideas bank” from which Unions, Conferences, and local churches can develop better strategies within their particular cultural and geographical settings.

Participants emphasized that Nurture and Retention should be highlighted at all major events. Further research at a local level should also help to inform the debate. Listening to the voice of youth and creating safe spaces for them was emphasized, along with the need for better recordkeeping and “redemptive” auditing that might help members to reconnect with those who have, for whatever reason, slipped away from the church.

Year-End meetings are a time for financial reports and budget setting, discussing the progress of mission within the various TED departments, and networking together to see the mission of the church progress in Europe.

This year the networking took on a whole new level as the 12 lay-representatives took the initiative to meet together and recommend to the TED Executive committee three motions regarding the reconciliation and adherence in church governance process being coordinated at World Church headquarters.

Their aim is to provide a positive framework to move forward following the Procedures for Reconciliation and Adherence in Church Governance debate during the General Conference’s Annual Council on Monday, October 9, 2017. [See Unity in Mission, a TED Focus.]

While previous voted TED actions on church unity had developed more through the president’s council and consultation with delegates, this came as a grass-roots initiative. Pastor Geoffrey Mbwana, GC vice-president, greatly appreciated the positive mood and spirit. “You have been very gracious in expressing your concerns on procedures used in processing the Reconciliation Document #2. You conducted your discussion in a cordial manner.” He added, “Thank you for upholding the Christian values even on this difficult situation we are trying to address as a Church.”

After detailed discussion the lay-members presented three motions. In summary, the motions request that:

1. Recognizing that English is not the first language for most delegates, any documents to be voted at Annual Council or GC Session should be provided in advance.

2. Any documents should be carefully and legally verified and should not be seen to go against the democratic process.

3. It would be appropriate for all parties to take a pause, or breathing space, to allow for prayerful consultation and to search for solutions for unity that can be supported and agreed upon by the GC administration and those church entities with whom they are consulting. They also emphasized that all concerned parties should abstain from taking actions during the pause that will jeopardize the consultation process.

During the discussion, Michael Mbui, pastoral representative from the British Union Conference, emphasized that “as a church we need to be inclusive. We need to look for inclusive, not exclusive solutions to allow for all of us to play our part.” Others highlighted the need “for us to sit around the table, to look each other in the eye, and to talk together.” There was an emphasis from several that “We want a pastoral, redemptive solution.”

The full document and motions are available here and have been forwarded to the General Conference administration at the World Church headquarters for their consideration.

What memories will people take home with them? For Raafat Kamal it was the openness and honesty of a full week of debate, focusing on a positive way forward. That tone was set by his Presidents report which took a serious look at leadership challenges, including various disconnects, as well as suggested solutions. Primary among those solutions was the introduction of two discipleship coaches for central Europe and Scandinavia, and a new Associate Treasurer whose primary role will be leadership training. [See full report here.]

For others it was the networking, the vigorous debate, Daniel Duda’s inspiring Sabbath School lLesson, or the inspiration of the music and Tihomir Lazic’s quickly formed Sabbath choir. Yet others enjoyed their prized early morning, late evening, or Sabbath afternoon walks along the stunningly beautiful coastline. Pastor Mbwana stated in his closing remarks that he saw, “above everything else, the heartbeat for mission in the TED is alive and strong.”

And Eglė? As she returns to Lithuania as a lay-missionary she simply states, “It was so good to be here. Thank you for all the smiles!”

Further photos and links to video reports are available on the TED Facebook page.

This story was written by Victor Hulbert and originally published on the Trans-European Division website.