What if Abraham Had Said to God: “No! I Will Not Kill My Son”?

What if Abraham Had Said to God: “No! I Will Not Kill My Son”? 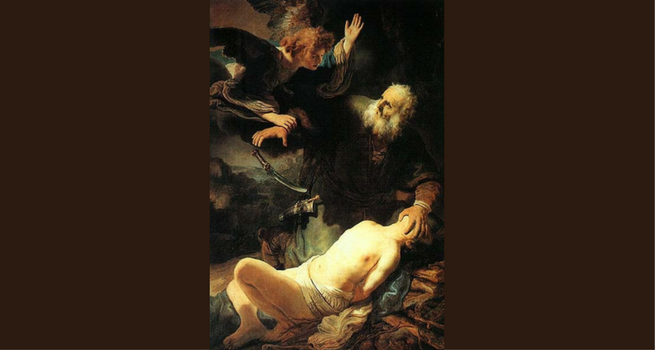 A few weeks ago I was re-reading Chinua Achebe’s classic, Things Fall Apart—the pre-eminent exemplar of the tragic results of the African encounter with Europe. The jarring similarity between, Okonkwo, the novel’s tragic hero, and our biblical Abraham, reacting to their different gods’ commands to sacrifice their sons, is stunning. Okonkwo was one of the most successful self-made leaders of his community—the clan Umuofia. But he also had an outsized fear of failure, in dreaded comparison with his good-for-nothing father.

After the murder of an Umuofian clansman’s wife, the offending neighboring clan sued for peace by delivering a virgin to the widower, as well as a boy-hostage named Ikemefuna to be used as a future live sacrifice. Ikemefuna was placed in Okonkwo’s household where the boy was raised over many years and quickly became indistinguishable from his own children. Then one day the elders acceded to the gods and declared it was time for the sacrifice.

The oracle had determined that the boy must die. This decree could not be controverted and Okonkwo had no recourse but to give up the child. However, the gods did not demand that Okonkwo play a part in the death of the boy he has grown to love. That is why Ezeuolu, Okonkwo’s friend and community stalwart, cautioned him:

The oracle of the Hills and Caves has pronounced [his death]. They will take him outside Umuofia as is the custom, and kill him there. But I want you to have nothing to do with it. He calls you his father. (p. 5; Connell University Edition)

Okonkwo, though emotionally wrecked by the news of Ikemefuna’s impending doom, did not heed his wise friend’s advice. At dawn on the fateful day, he accompanied the village warriors on their journey of death. All nine men, with sheathed long machetes, marched in single file with Ikemefuna, palm wine pot atop his head, heralding the grim procession deep into the dark forest.

As the man who had cleared his throat drew up and raised his machete, Okonkwo looked away. He heard the blow. The pot fell and broke in the sand. He heard Ikemefuna cry, ‘My father, they have killed me!’ as he ran towards him. Dazed with fear, Okonkwo drew his machete and cut him down. He was afraid of being thought weak.(p. 61)

Now flash back to Abraham, his son Isaac, and Abraham’s God. God tells Abraham: “Take your son, your only son, your beloved Isaac, and go to the land of Moriah, where you are to offer him as a burnt offering, on one of the mountains I shall point out to you.” (Gen 22:2, NJB) From here on the camera is trained only on Abraham—what he says, what he sees, and what he thinks. He gets up the next day, gathers what was needed for the journey, and sets his eyes on Moriah and its mountains with Isaac and his two servants in tow.

I have always wondered why Abraham never shared his dark burden with Sarah, his lifelong companion. There is too much deep silence in the story, silence of Abraham and Isaac, but more profoundly of Sarah. I can understand not telling Isaac. What young man in Isaac’s shoes would go along with this plot? Likely, had he been apprised of this plan, Isaac would have disagreed and demonstrated his disagreement by running away before Abraham was half way through his telling, trusting in young legs to separate himself from a father who would consider such a scheme. Since Abraham did not anticipate the substitution of an animal for Isaac, one can only wonder about the trust relations between father and son after the unbinding. After this incident, could Isaac have dared to accompany his father anywhere, even in broad day light, without imagining some sinister foreboding? Keeping this secret from Isaac is understandable, but Sarah?

Maybe Abraham kept his own council because, at this stage in his relationship with God, his faith was so grounded that the idea of killing his beloved son was unimportant if that was the price God exacted as proof of continued faithfulness. This explanation could suffice if the marginalization of biblical women was not so conspicuous.

There is a troubling pattern about the sidelining of women in patriarchal stories, and it begins with Abraham.  The writers, and subsequent redactors of Genesis, present Abraham as the undisputed “father” of the elect through whom God purposed to bless all nations.  Through Abraham, God particularizes a people He identifies as his own.  The sign that God used to singularize Abraham and his descendants in covenant was the ritual of male circumcision, an act that, through no fault of theirs, was inaccessible to women.  Exclusion from this most important rite, the one that casts Abraham’s descendants as God’s favored, in no small way sets the stage toward making women seem second class in God’s eyes.  This was the ugly beginning of patriarchy, an unfortunate launch that would bloom into the obnoxious misogyny common in our own time.

So Jacob will have thirteen children, but the twelve men gain preferred status. Twelve tribes of Israel from Jacob’s thirteen clearly demonstrates the ease with which women were set aside and denied meaningful representation at this crucial point in God’s covenant process. Dinah glibly disappears, foreshadowing the glass ceiling women in future generations would face. Yes, there are occasional stories in scripture that elevate women—Deborah comes to mind—but those are exceptions to the rule.

We must be careful to make a clear distinction between God’s dictates and how scripture writers conveyed them. The two are not necessarily the same.  It is not clear whether God instituted patriarchy as it has come down to us, or if this is a cultural portrayal by Bible writers of God’s intentions. Either way, the result has been a sad negation of what Paul will later affirm: “There is neither . . . male or female, for you are all one in Christ Jesus” (Gal 3:28; NIV).

Therefore, exploring Abraham’s lack of communication with Sarah on the issue of sacrifice is important. What if Abraham had mentioned God’s order to Sarah?  We will never know what direction that conversation might have taken because the story’s author and future redactors did not address it or give her voice.  However, Sarah, in this situation, is no different from any mother, wife, or daughter.  She is a ready stand-in for every woman, and as such, we can conjecture what her initial reaction could have been.

Given the experience Sarah went through to have Isaac, it is reasonable to anticipate that she would want to know which God gave Abraham the directive. “Which God asked that you kill our Isaac in Moriah country?” she could have asked. This question is crucial because it helps to clarify our thinking.  In this context, Sarah would be asking Abraham to square the God who abhors killing, especially of the innocent, with this ungodly order—what Kierkegaard calls the “dread.”  When we advocate positions that are inconsistent with God’s broader principles, we need others close to us to help us navigate the apparent contradictions.

Additionally, Sarah could have queried Abraham specifically about human sacrifice.  Was the practice so common that God ordering it would not have raised eyebrows?  Abraham apparently never asked God about the veracity of this “strange” request.  His seeming acquiescence to this injunction suggests that the practice was common.  Suppose it was common but was practiced mainly in communities unexposed to Abraham’s God. Then Sarah would want Abraham to question the source of this order because it would be anomalous if coming from God.  It is conceivable that Abraham was seething inside, and his robotic lack of response could be attributed to shock.  If so, it is another reason why seeking Sarah’s input was warranted.  Men sometimes “freeze up” when confronted by stupefying situations and, like Okonkwo, act “bravely” by mowing down their children to cover up their bewilderment.

Not so women.  They insist on asking for directions at the slightest hint that the man driver is lost.  One reason that women in all cultures perennially outlive men is that men routinely confuse recklessness and heroism. They go to war, for example, instead of talking things out.  But a more important reason for the longevity imbalance could be that because women bear a disproportionate burden in the anguish of bringing life into being they think more carefully before giving up on life.

Finally, had Sarah been consulted, she might have asked: “What if this is a test?  No, not of your loyalty, but whether we understand what God has been teaching us.  We see human sacrifices to the pagan gods around us, and God has asked us not to take part in it.  What better way to test our understanding than to ask us to do the very same thing.”  What if Sarah had told Abraham: “Tell God No!  And if he insists, tell him we have no power to resist him, but we will have no part in killing our Isaac: he calls me mother, and calls you father.”

Could it be that the provision of an animal to replace Isaac as sacrifice was God’s solution to Abraham’s failure to engage him? Perhaps he was attempting to nudge Abraham to a better vision.  Mount Moriah then demonstrates a regression in our walk with God.  God always encourages engagement, and Abraham was not oblivious to this.  He had bargained with God in his attempt to preserve Sodom: first 50, then 45, down to 20. And signaling his utter surprise at God’s magnanimity, took an extra shot: “I trust my Lord will not be angry if I speak once more; perhaps there will be only ten.”  “I will not destroy it,” he replied, “for the sake of the ten” (Genesis 18:32b, NJB). Would God then begrudge Abraham bargaining for his son’s life?  Why then did Abraham not trust in God’s goodness and asked him—why?