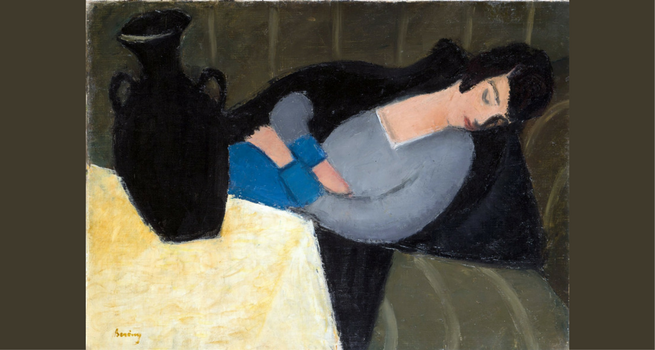 Romans 6, twittered, is: God sees in you someone you don’t, but should!

Paul wants us to shift perspective, to see ourselves as God sees us, to walk in heavenly moccasins. Let me illustrate:

In 1999, Hungarian art historian Gergely Barki sat with his family around Christmas time, watching Disney’s Stuart Little. What he saw in the background of one of the film’s scenes was the art historian’s dream Christmas present: “Sleeping Lady with Black Vase,” by Róbert Béreny, a Hungarian painter.[1] He knew that in the chaos of World War II, the painting had disappeared. But he also knew that the painting still existed since he had seen a black and white photograph of it. It took Barki two years to nail down the story. The picture had undergone an incognito odyssey and ended up in California, in the bedroom of some assistant Hollywood set designer. The one who, when working on the set to Stuart Little, hung it on the wall of Stuart Little’s new family home. On Christmas 1999, it came full circle when Barki, as he later told, almost dropped his daughter from his lap, leaping at the sight of the painting.[2]

The argument in Romans 6 is triggered by a question: “What then? Are we to sin because we are not under law but under grace?”[3] (v. 1), a logical objection to Paul’s previous statement that “where sin increased, grace abounded all the more” (5:20). Logical, according to Paul (v. 19), only in the sense of trying a human perspective on heavenly matters (Adam and Christ, Ch. 5). Logical within the framework of human endeavors.

All usurpation of Paul’s train of thought by human contingency leads to either perfectionism or frustration. The latter, because reading Paul’s message bottom-up will prompt us to just shake our heads at such questionable notions as being “dead to sin,” when it’s obvious that we aren’t. Our reality doesn’t even start to measure up to this ideal. The former is perfectionism, the ghost haunting Adventism in recurring surges. It is cloaked in the veil of orthodoxy, yet it is another human endeavor, whether molded as process (sanctification), promoted as Last Generation Theology (or Harvest Theology), or forwarded as a sophisticated but helpless attempt at labelling justification with tags like “imputed” or “imparted”.

Paul’s answer to all of this, in short, is: Jesus Christ. “Don’t you know …?” (v. 2). With yet new imagery and wording Paul does nothing else but retell the gospel story, the historical/universal event of Jesus Christ crucified, buried, and risen. The baptismal event of which Paul reminds his audience serves as liturgical re-enactment of that story. Baptism welded the story of Jesus and us into one solid piece, whether you want to call it sanctification, participation or unio mystica.

If we use Genesis 3 as a springboard, then sin is belief in the possibility of human endeavors.[4] Being graced, justified, rectified, means that sin is no longer the defining characteristic of our new being. Through grace, God doesn’t remember us as sinners, says Karl Barth.[5] So, if this is the way God sees us, then all other competing ways of seeing ourselves and our ventures have spun out of the ballpark. If we allow this shift of perspective to influence our lives, all attempts at human possibilities, the strength of the will, the victory over sin, will only leave the stale taste of paradise lost on our palates. Paul puts it as strong as he can: me genoito! By no means! Never! Or more oxymoronic: hell, no!

To cut back to the illustration above: Where others saw Stuart Little, Barki saw a lost piece of art. Where we see sin and sins, God sees people having died to it, all sin being ripped bare of the illusion of necessity. This is the picture, the chef d’oeuvre of Christ in us, and it is hammered in by use of word-creations, since new perspectives need new words to frame them.

In December 1521, Luther started working on a German translation of the New Testament while being confined to the austerity of the Wartburg. Though he finished the New Testament in just a few weeks, it would take him and his team until 1534 to complete the entire bible. Luther’s translation, the German Protestant default text to this day, was a linguistic masterpiece. Otherwise history’s hot gales would have let it wither away like so many other translations before his.[6] In his attempt to use understandable language, Luther often recurred to neologisms, creations of new words.[7] Guess who he learned from? Paul. In Romans 6 (and other places) Paul creates new word-combinations which hitherto were unknown, yet understandable. He did this by simply hitching the preposition “with” (sun) to verbs like dying, being buried, risen, glorified, etc. Unfortunately, this fact gets lost in translation, because to make it intelligible in English, “ole King James” had to tear them “asunder”, which makes an odd “buried with him”, where what happens should sound like: withburied, withdied, withrisen.[8]  We can hardly grasp how hearers tuned in to the Greek of the time would have listened up.

All these creations were triggered by Paul’s use of the phrase “with Christ”[9]. While there are several learned theories as to where Paul got the “with Christ” idea from, the most probable is that Paul taps into the language of mystery cults that stressed some form of divine participation through ritual/liturgy/mystery (sun thew/theois).[10] They are however not parallels but cheeky borrowings which underwent significant change of meaning in the way Paul crafts his argument. By molding the alleged divine participation (of the mystery cults) into a story, a historical context (that’s why he uses action-words = verbs), Paul flattens the divine-human participation horizontally, the defining center and acting agent being Jesus Christ. This form of de-mystification makes the gospel of Jesus Christ available to all who can follow a plot (starting with kids). With Christ, he hammers in, something happened to us.

It Happened to Us

Another observation is in place. Adventism’s love-hate relationship to speculations about sinless perfection feed on radical individualism, couched in dos and don’ts: Ethical imperatives ride the gravy train of angst and self-improvement. The language used by Paul, however, is always in the plural: in verses 1–10 Paul uses the first-person plural (we/us). From verse 11 on he switches to the second-person plural: you.

The use of the communal voice (us/we/you) is no happenstance or mere rhetorical device. Paul deals in communities, not so much in individual performance. He writes to a whole church. His message – to start living the way God sees you (pl., umeis, v. 11) – will depend on the quality of togetherness engendered by living “as if.” The church, the community of the saints, is thus an eschatological community, not a bunch of navel-gazing individualists obsessed with self-improvement. A community exemplifying the Schema-Israel (hear! love! tell! Deut 6:4-6) or in Johannine language: be recognized by the love you show to one another (John 13:35). To consider oneself dead in sin is looking backwards to the cross, upwards to Jesus, and onward to the consummation; but not inward!

What then can we hope? Will we enter the heavenly gates with sinless perfection, ready-made? Will we have complete victory over sin? Or will we be entering fighting over perfection (yes! no! yes! no!)? Will the last generation be Exhibit A to the universe? Or are we doomed to throw our hands in the air in frustration, saying: Wretched that I am! (7,24)? Well, let’s settle with a cliffhanger and check back in the next two weeks … hang in!

[3]Most commentators hold this as a rhetorical question for the sake of Paul’s argument. Recent research sees the letter to the Romans prompted by real contention, however, namely hostile counter-missionaries of the Galatian brand. For discussion, see S. Tonstad. The Letter to the Romans. Paul among the Ecologists, (The Earth Bible Commentary. Sheffield Phoenix Press 2016), 54ff)

[6]For German translations prior to Luther’s, see here.

Dennis Meier has served the churches of Hamburg as a pastor since 1995. Since 2013, he has been the president of the Hansa Conference, covering the most northern territory of Germany.