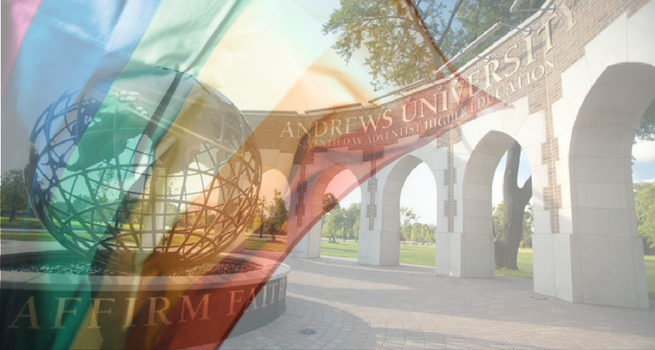 The Andrews University Board of Trustees, which met on campus in October, has approved the creation of an official LGBT+ student support group.

The statement regarding the university’s commitment to providing this group appeared in the October 26 edition of the campus newspaper, Student Movement, and follows in full below:

Over the past two years, Andrews University has worked with a team of faculty, staff, students and church leaders to develop a Bible-based framework that fully reflects Seventh-day Adventist beliefs and values regarding sexual orientation. The resulting document, first published in the 2016-2017 Student Handbook, outlines a commitment to providing a safe, caring and informed campus environment for LGBT+ students. Guided by the framework, the Student Experience and Faith Development subcommittee of the Andrews University Board of Trustees voted this week to approve a plan for a thoughtfully designed, supportive group on campus for LGBT+ students. The subcommittee looks forward to receiving periodic progress reports from the University and student participants.

Research conducted recently by our Andrews University professors found that a significant number of Adventist young adults who identify as LGBT+ have experienced a great deal of suffering and rejection from family members and faith communities. The University’s goal is to engage these students spiritually and support them emotionally as they navigate their sexuality and/or gender identity. More information about this University-based group will be made available to students over the next few weeks as plans unfold.

This statement is part of a detailed document drafted by the University’s LGBT+ task force, in conjunction with LGBT+ students, called the “Haven Constitution and Bylaws.” Steve Yeagley, assistant vice president for Student Life, said the full document is only for internal use at this time “while we make the transition to providing University-based care for our LGBT+ students.”

Yeagley also explained that this new group will not function as a typical gay-straight alliance (GSA) found on other college campuses. Instead,

it is designed to be a confidential, members-only group that will exist solely for the support of LGBT+ students, including those who are questioning or have not yet fully disclosed their sexual orientation and/or gender identity. Unlike student-led clubs and organizations, this group will be co-led by a team of two faculty/staff members and two LGBT+ students. We have tried to build a collaborative structure that maximizes the valuable insights of both University personnel and our LGBT+ students. We are now in the process of forming the leadership team and will work with them to make the final arrangements.”

The group will be overseen by a 10-person Advisory Panel and chaired by the director of the Andrews University Counseling & Testing Center. “The Advisory will be made up of faculty, staff and students (including LGBT+ students) from across campus, with our vice president for Diversity and Inclusion serving as secretary,” said Yeagley.

Since 2011, an unofficial LGBT+ group, AULL4One, has existed at Andrews University. When asked if the university-sponsored group would replace AULL4One, Yeagley replied, “[AULL4One] has come to hold a special place in the hearts and lives of many. We want to honor that investment and have not stipulated the future of AULL4One. Our goal has been to work with the LGBT+ student community to create a University-based group that will meet their needs, while also offering the benefits of institutional support.”

Eliel Cruz, founder of AULL4One and LGBT activist, expressed appreciation for the steps the university has taken in recent years to support its LGBT+ students with a safe environment in which to learn and grow:

I never thought that an official LGBT group would be formed at Andrews University just a few years after my graduation. This is the fruits of immense labor by LGBT students on campus asking for Andrews University to grant them space to be able to thrive. I’m grateful for the work these students have done and the assistance and cooperation of Andrews University student life and administration. This will, without a doubt, be life-saving.”

Though excited about the formation of an official group, Cruz is disappointed with the Seventh-day Adventist Church’s official stance on LGBT+ members and Andrews University’s adherence to that theological stance in its Student Handbook:

While there is lots of reason to celebrate Andrews University’s addition of Haven, I find it difficult to reconcile their non-affirming stance with their emphasis on LGBT persons’ well-being. I understand the complexities and politics of being a large institution under the eye of the General Conference of the Seventh-day Adventist Church. I lived those politics as a student. But after graduation, I’ve been convicted that any attempt to remedy the disparately high number of LGBT people who suffer from mental health issues and suicide is futile without first reckoning with the source of that violence: non-affirming theology toward LGBT people. I would say that Andrews University is attempting to put out a fire they are simultaneously fueling because of the Adventist Church’s official theological stance on LGBT people which the University follows.”

Alexis Thomas, current president of AULL4One, who has been involved in the creation process of Haven, sees the approval of an official group as a positive step forward for the University. In an official statement from the president, she wrote:

I am absolutely ecstatic about the Haven Constitution being approved! In fact, that just might be the biggest understatement I’ve made all year. Words really can’t express the joy of seeing something we’ve been striving so hard for finally come into fruition. The years of meetings, patience, and diligence have finally paid off. This is not just a victory for us as current LGBT+ students at Andrews University but a victory for students of the past and most importantly of the future. Haven will ensure that any student (presently or in the future) who doesn’t fit into the “typical” box of cis and heterosexual receives a much needed safe space to express themselves openly. We happily welcome allies as well, with the main focus of course being LGBT+ students. This is much like how AULL4One operates currently, however, this group will be official. Therefore, we are now permitted to meet on campus and advertise to the larger body of students that AULL4One just wasn’t able to reach...This is most certainly not the end of AULL4One by any means, though. The faithful, little group that was basically a best kept secret will still exist side-by-side with Haven…We are excited to experience, learn, and grow as Haven grows! Keep us in your thoughts and prayers as we continue onward and upward!

Haven’s first meeting is slated for the end of Fall Semester.