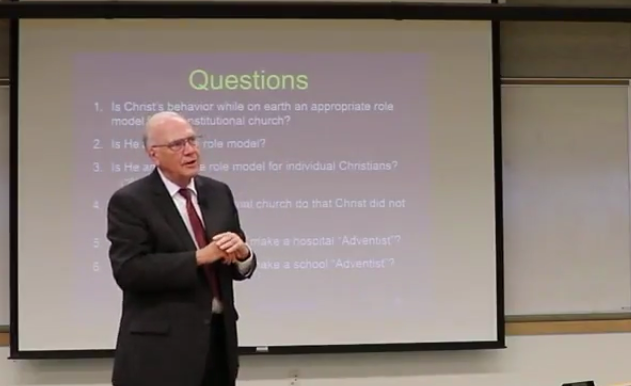 Few things are more common among Seventh-day Adventists than laments that the denomination is too institutionalized in its many schools, medical centers, food factories, publishing houses, youth camps, and other such things all around the world. Quite a few conservatives want to sell them and put the money into evangelism. A significant number of liberals want to dispense with them and use the money to help the poor. Despite their other differences, these conservative and liberal Adventists want us to get rid of most of our institutions and the sooner the better.

Michael Scofield will have none of this. In two presentations at the Roy Branson Legacy Sabbath School in Loma Linda on September 23 and 30, he detailed in two characteristically stunning PowerPoint presentations why institutions are “necessary evils.” In his thinking, each of these two words is as important as the other.

He earned his Masters of Business Administration at the University of California, Los Angeles. Since then he has worked in related fields such as decision support systems and data warehousing, information architecture and database design, and information and data quality control. He has also long been active in informal and formal discussions about the denomination’s administrative structure. He does not use the expression “administrative jerk” in a flippant fashion. He employs it as a technical term with specific meanings.

Well into his first presentation, he defined an “institution” as “a collective, organized structure, [with] assets and methods for achieving commonly held goals.” Institutions are “necessary,” he contended before and after this definition, because they increase synergy, stability and survivability and because they enhance economies of scale, greater efficiency and effectiveness.  He elaborated on all of these.

Institutions are “evil” because they easily become self-serving, overly reliant on charismatic individuals, hotbeds of nepotism and cronyism and void of adequate transparency and accountability. He explained and illustrated these and other negative features of many institutions. As Reinhold Niebuhr famously did in 1932 in Moral Man and Immoral Society: A Study in Ethics and Politics (Westminster John Knox Press, 2013), he made the point that human beings often act less responsibly in groups than they do on their own.

He used three partly overlapping circles to distinguish the three kinds of people who hurt institutions. The left circle is the home of those who are well-meaning but incompetent. The right circle is for criminals. The circle in the middle is for the institution’s “jerks.”

At one point he listed a dozen characteristics of an “administrative jerk.” He added that, if any of us embodies at least six of them, we can be certified as “genuine jerks.” Throughout the entire discussion, he repeatedly declared that “competent management is a moral imperative.”

He began his second presentation by defending his use of the word “jerk” in the first one. Refusing to relinquish it despite the criticism he had received in the week between his two presentations, he relisted their characteristics and the importance of minimizing their presence and influence.

Throughout much of the second presentation he highlighted sources of denominational tension. One of the most memorable of these is the mutual discomfort between the small percentage of Adventists who live and work in places like Loma Linda and the overwhelming majority of them who don’t. “They don’t think like you do!” Scofield declared.

Although I doubt that he intended this, Michael Scofield’s presentations challenged the way I have been thinking about Adventism’s discontents. With some justification, I have thought of them as largely between some in the Global North and some in the Global South. Although I do not jettison this way of thinking about them, the increasing pressure between the local congregations and everything else that denomination is doing now strikes me as a very important factor, too.

Isn’t high blood pressure the “silent killer?” Might this be as true in the “Body of Christ” as it is in our own?

WATCH Michael Scofield on "Why Do We Need an Institutional Church?” (Part 1)

WATCH Michael Scofield on "Why Do We Need an Institutional Church?” (Part 2)