Financing the Work: Day 5 at the NAD Meetings

Financing the Work: Day 5 at the NAD Meetings 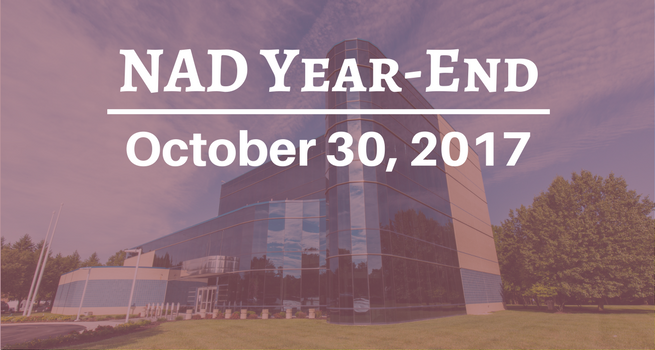 On Monday at the Year-End Meetings of the North American Division, over 15 reports were presented with lightning efficiency on a variety of topics.

Jiri Moskala, dean of the Seventh-day Adventist Theological Seminary on the campus of Andrews University, presented first on an exciting new MDiv program being offered. Students with previous theological experience (such as theology majors), can now complete their MDiv in just two years (when enrolled for the fall, spring, and summer semesters). Those without a theology background will still need to complete the three-year program.

President Dan Jackson shared that even though Andrews University and the seminary are GC institutions, the NAD does contribute $5 million annually to help support them.

The rest of the morning was spent on finances. The Treasurer’s Report was presented by G. Thomas Evans.

Tithe within the NAD in 2016 topped $1 billion for the first time in history, due in part to the extra Sabbath that year. The Southern Union contributed the most at $225 million. The local conferences and unions receive 82.46% of tithe while 17.54% is remitted to the NAD.

Though the NAD makes up less than 7% of the world population, 43% of the world’s tithe comes from the NAD, and the NAD contributes 67% to the world church budget. There is a plan in place to reduce that contribution over a number of years so that more money will stay within the NAD for use by its own unions and conferences.

In 2005, 10% of the NAD’s received tithe was remitted to the GC for distribution to the world church. That amount has steadily decreased since that time with 6.6% being remitted in 2017 and a drop to 5.85% in 2020. Evans said that in 2020, this topic will be revisited with a plan to continue to reduce this amount even further in coming years so that NAD unions and conferences can use a larger portion for their own purposes and for advancing the mission of the Church within the North American territory.

When it came time to accept the Treasurer’s Report, discussion on the floor turned to a previously voted policy change concerning funding for the regional and Hispanic capital reversion funds and scholarships.

The money being allocated to the regional/Hispanic funds was originally based on the total tithe income the NAD receives. However, because a significant portion of that money then goes on to the General Conference for distribution to the world church, it was then voted several years ago to change the amount given to the regional/Hispanic funds to be a percentage based on the amount of money the NAD retains rather than on what it receives. Last year, an action was voted that a discussion would take place between NAD officials and the regional conference officials so that this issue could be revisited.

However, that discussion never took place, so a motion was made that the Treasury Report be accepted, except for the line item concerning regional/Hispanic funds, so that matter could be explored further and the discussion that had been agreed to last year could happen. The amendment passed with 123 yes votes, 72 no votes, and 4 abstained, and the amended motion passed 163 yes, 34 no, and zero abstained.

Right before lunch, a motion came to the floor to request that an advisory committee be set up to deal with the issue of retention in the church. Jackson suggested that an emphasis be placed on making sure young adults are part of the committee. The motion carried.

After lunch, the first item on the agenda was to elect a new VP for Multilingual Ministries. The current VP, R. Ernest Castillo, is retiring. The name of Tony Anobile was put forward as a replacement. Elder Anobile currently serves as VP for the Pacific Union.

Ricardo Graham, President of the Pacific Union, spoke in favor of the choice. He said though he would greatly mourn the loss of Anobile in his Union, he would make a fine choice for the new position.

Next up was the General Conference Auditing Service 2016 Annual Report. GCAS looks at 28 core financial policy items to determine compliance of church entities. At Annual Council, it was revealed that 81% of world church entities are out of compliance in some way. NAD entities are slightly lower than this with 76.8% receiving a “non-standard” report.

These are the top five reasons for a non-standard policy compliance report: missing or incomplete conflict of interest statements, investments or investment procedures not in compliance with policies, financial reports not provided to governance and/or management on a regular basis, budget plan not approved by committee, and local church and school reviews not performed at least biennially.

Next, the Adventist Review team shared its report. Editor Bill Knott introduced his team, the majority of whom are young people. Sharon Tennyson reported that new believers can receive a free one-year subscription to the Adventist Review, and over 150,000 new believers have taken advantage of this. Over the last 20 years, readers have contributed $1.6 million to the Review, and conferences have given over $1.1 million which helps makes this endeavor possible.

Wilona Karimabadi, editor of Kidsview, discussed the importance of a safe magazine for kids that contains no questionable content. Rico Hill, director of development for ARtv, reported that this new video endeavor will officially launch on Thanksgiving Day. The newly redesigned AdventistWorld.org went live Monday night.

The NAD Communication team then revealed its new magazine: Adventist Journey. Content will be available both in the free print edition that will mail out with Adventist World, starting in January 2018, as well as on the NAD’s newly redesigned website. Journey’s emphasis will be on sharing the stories of Adventists in North America. "The NAD is not made up of institutions. It's made up of members. It's their stories we want to tell,” said Dan Weber, director of communication.

The most inspiring report of the day was given by Diane Thurber, president of Christian Record Services for the Blind, and her special guest Jordy Barnhart. Jordy is a young blind man who has attended numerous Adventist camps for the blind across the United States. He shared that he wants to read the Bible the whole way through before he gets baptized. Christian Record provides free Bibles, either Braille or audio, to any visually impaired person who requests one. Jordy showed the audience his solar-powered audio Bible which contains the 66 books of the Bible as well as six books by Ellen White.

Jordy, who taught himself to play the piano over the years, then led the delegates in a heartfelt rendition of "Amazing Grace."

Associate Ministerial Director, Jose Cortes, Jr., presented on the NAD Church Plant 1000 initiative which seeks to have at least one church for every 25,000 people across the North American Division. There are currently 354 million people in the NAD territory and 6,765 congregations.

During the Education Report by Larry Blackmer, NAD VP for education, shared that a new Adventist academy in Tampa, Florida is planned to serve the needs of the many Adventist healthcare employees who work there. A passionate discussion followed on the importance of Adventist education, with both young and older delegates coming to the mic to share their thoughts.

The day ended with an announcement that a new conference, “The Future of Adventist Higher Education: Chicago Summit 2018” will be held August 9-12, 2018, following the annual NAD National Teachers’ Convention.

You can watch the entire business session on the North American Division’s Facebook page.