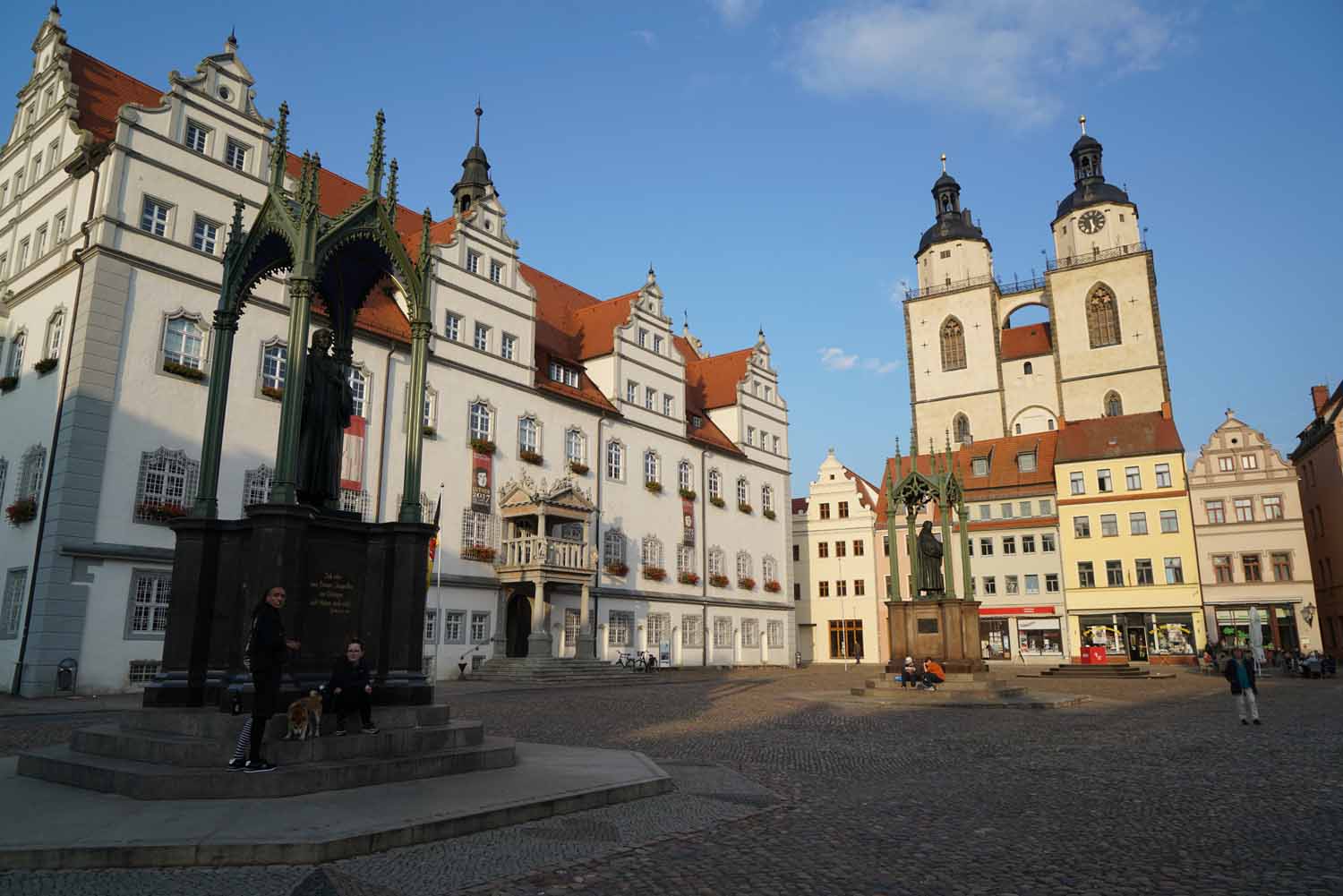 It supposedly happened 500 years ago today! Martin Luther, a professor at Wittenberg University nailed an academic discussion to the door of the Castle-church in Wittenberg, generating a discussion that led to the Protestant Reformation.

There is no better place to visit in order to understand the roots of the reformation – although it may be a painting in the town church, more than the 95 theses in the castle church that will really shine a light on what Luther believed. That is at least what Dejan and Victor discovered when they visited this small town on their Reformation Journey.

Few men have provoked controversy more than Martin Luther (1483-1546). His work as an accidental revolutionary began in 1517, just five hundred years ago. It was then that he did something that brought about, according to a recent authority, “the dangerous birth of the modern world”1 and launched, according to another, “Christianity’s Dangerous Idea” that was the core of “The Protestant Revolution.”2

Who was Luther? An intellectual giant who, unusually, could express himself unforgettably in language ordinary people knew. A miner’s son, he showed signs of genius from an early age, but, he was also a troubled, almost tortured soul.

Acknowledging his son as gifted, Luther’s father wanted him to train for the law. This was the way to get on in early 16th century society. Returning home from university in 1505, Martin was caught in a violent thunderstorm featuring a thunderbolt. His horse threw him, and he lay on the ground terrified; “Help me, St Anne,” he cried. “I will become a monk.”

Luther entered an Augustinian monastery. From the first, what he was concerned about was not reforming the Church, but the salvation of Martin Luther. His soul was tortured because he believed that if he wanted to please God, he had to make himself into a good person. In line with Church teaching, Luther then believed that humanity had the capacity to make itself righteous. If an individual did so, God would endorse his transformation and, through the sacraments of the Church, save his soul.

When Luther conducted his first mass in 1507, the transformation had not taken place. He had the strongest possible sense of his personal unworthiness. Who was he to approach God?

His superiors acknowledged that he was outstandingly gifted, but thought, too, that he was given to morbid introspection. Luther struggled in vain to discover a gracious God and the sense that his sins were forgiven. He couldn’t find them. They chose to send him to the University of Wittenburg in 1508. There, perhaps, through the discipline of study, he would find what he was searching for. He didn’t. As part of his education, he was sent to Rome in 1510. The visit made a deep impression on Luther but, despite the stories told by others, he had no conversion experience and found no peace there. On the contrary, much that he saw disturbed him.

On Luther’s return from Rome, he was appointed lecturer/professor of theology at Wittenburg. In 1517, in that pastoral/academic capacity, he took the action that would lead to the Protestant Reformation. Nothing revolutionary...or was it? Luther nailed ninety-five Theses to the door of the Castle-church at Wittenburg. He wrote his ninety-five propositions in Latin, the international language of scholars. He meant them to be the subject of scholarly debate. After all, church doors did double duty as notice boards. There they would attract attention.

They did, and not just among the scholars! An enterprising printer translated the ninety-five propositions into German, and ran off thousands of copies. Martin Luther was addressing a scandal in the Church that was affecting the local community.

The scandal was “indulgences.” These were certificates that offered forgiveness of sins in return for money. Those who visit Rome cannot fail to be impressed by St. Peter’s and the Vatican. But those impressive buildings, then being built, were extremely costly. Costly even for an institution as wealthy as the papacy.

The Church argued that Jesus Christ and the saints had bequeathed to them a “super abundance of righteousness.” That enabled the Pope, in return for the purchase of an “indulgence,” to issue certificates of forgiveness for sinners willing to pay either for themselves or their relations who had already died (and were thought to be in Purgatory). The local salesman for indulgences, Tetzel, was saying, “As soon as the coin in the coffer rings, the soul from Purgatory springs.” Some sales pitch! A local priest said that the prerequisites for an indulgence were three: “Contrition, confession, and contribution.”3 But that was for personal indulgences. All that was necessary to buy a dead loved one from purgatory was contribution.

Scandalous? Luther thought so, whether indulgences were for the living, or the dead.

The reason he thought so was that, between 1512 and 1516, during which he had lectured at Wittenburg, Luther had reached the looked-for answer to his question, the resolution to his struggle. His tortured spirit had found peace.

Specifically, in 1515 and 1516, he had been lecturing on Paul’s Letter to the Romans. His research had been clarified by the publication of an accurate Greek New Testament by Erasmus of Rotterdam. His study had also been assisted by recourse to the works of Augustine of Hippo (354-430) which had appeared in print.

The focus of the struggle for Luther had become Romans 1:16, 17: “I am not ashamed of the Gospel of Christ, for it is the power of God to salvation for everyone who believes . . . . For in it the righteousness of God is revealed, a righteousness that is by faith from first to last, just as it is written ‘The righteous will live by faith.’” (NIV)

The focus of Luther’s puzzlement at first was the phrase “the righteousness of God.” It seemed to mean the righteousness that God required of him. He knew from experience that such an absolute righteousness was beyond his ability to achieve. He couldn’t do it. “Once, when I was meditating in the tower of the monastery,” he wrote, “I saw that the Law was one thing, and the Gospel was another.” When he realized the “righteousness of God” meant God’s gifted righteousness to the repentant believer – the door to God’s grace was flung wide open. In his words, “It became to me a gate to paradise.”

When Tetzel came to town “selling” righteousness, Luther was especially affronted; “The righteousness of God is not a righteousness we achieve by our performance; or buy through indulgences. It is a righteousness that God gives us when we repent. It is the free gift of God through faith.” Luther’s favorite verse became, “The just [righteous] shall live by faith.” Later this would become the core Protestant teaching of Justification by Faith.

In 1517, this teaching began to emerge in the 95 propositions.

In his first proposition, he challenged the assertion that the Church could forgive the sins of those who bought indulgences. When Christ said, “Repent,” asserted Luther, He meant that the entire life of the believer should be one of repentance. By proposition 37, he was stating that any Christian could be forgiven by God without papal indulgence letters. In propositions 45 and 46, he said that Christians who used their money to buy indulgences instead of caring for their families or for the needy would incur God’s wrath. In proposition 62, he said that the Church’s message, the Gospel, was about the astonishing grace of God.

The enthusiastic reception of the 95 Theses by the wider community in Luther’s part of Germany caused concern among some. Albert of Hohenzollern had borrowed a vast sum to buy his archbishopric in Mainz, and was receiving a 50% cut of the proceeds of the papal indulgence. He was uncomfortable. The local German ruler, the Elector Frederick the Wise, was proud of Luther’s stand and backed him.

As the implications of Luther’s Justification by Faith became apparent, there were political consequences. He became an active, indeed, outspoken revolutionary. Luther had wrecked the medieval system of papal control. When the Pope bestirred himself into issuing a bull excommunicating Luther, Luther burned it. When, in 1521, Luther was asked by the Emperor Charles V to recant his beliefs in front of the imperial diet (parliament), Luther refused.

Luther was at the heart of a Europe-wide controversy. There were political and social consequences. There was an outbreak of Bible translations. For a thousand years the Bible had appeared in Latin only. Within a decade or two, it was translated into local languages. Luther translated it into vigorous, readable German.

Luther went into print with his beliefs. He influenced men and women in many parts of Germany, in France, in the Netherlands, in Sweden, and in Switzerland. Luther had his sympathizers in England. William Tyndale, Thomas Cranmer, Thomas Cromwell, Ann Askew, even Anne Boleyn was found in possession of Luther’s publications. For entirely cynical reasons, England’s tyrannical King Henry VIII, who had earned the title Defender of the Faith for attacking Luther, took advantage of the new movement to split with Rome and privatize monastic property.

But as we look back on it from a 500-year distance, what do we remember? If we celebrate the 500th Anniversary of the Reformation what, specifically, are we celebrating?

We celebrate Luther’s emphasis on the primacy of the individual conscience over controlling and corrupt ecclesiastic power structures.

Luther used the German word Gemeinde (community) to refer to the Church. He democratized faith. The Church was a gathering of believers, not a power structure with sacred powers and authority vested exclusively in its clergy. All believers by virtue of their baptism are priests. We celebrate that.

Above all, we celebrate salvation as the free, unmerited gift of God, received by faith. That is the Christian Gospel. It brought peace and assurance to Luther’s life as it can to yours and mine.

Still to come:
- Here I stand! (A combination of conscience, Scripture, and reason make for a life-changing choice)
- Found in Translation (The joy of Scripture through a multitude of Bible translations)

The historical information in this article was provided by Dr. David Marshall and used with the kind permission of The Stanborough Press.


This story was written by David Marshall and Victor Hulbert and originally published on the Trans-European Division website.

Image: Wittenberg town square with, in the background, the church where Luther preached three to four times a week. Image courtesy of ted.adventist.org.