A New Building and a Renewed Hope: Day 1 at the NAD Meetings 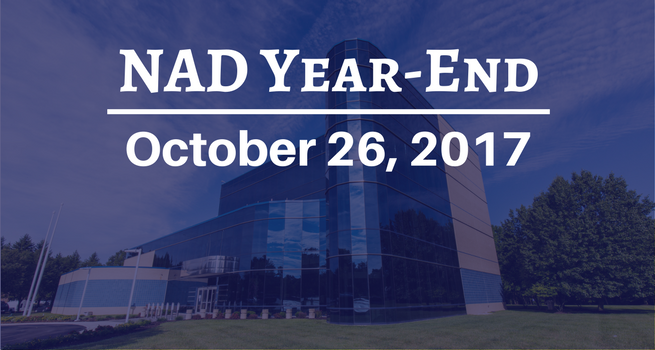 The Year-End Meetings of the North American Division (NAD) started with the grand opening ceremony for the much anticipated NAD headquarters, an event filled with much energy and laughter.

The Allegheny East Pathfinders Drum Corps opened the proceedings with a rousing performance. Then John Wobensmith, the Secretary of State of Maryland, presented NAD President Dan Jackson with a Maryland State flag that had flown over the State capitol building in Annapolis.

After the raising of the flags and a stirring rendition of the National Anthem, it was time to cut the royal blue ribbon, which coordinated well with the blue glass and tile building. Past and present NAD officials took part in the ribbon cutting. 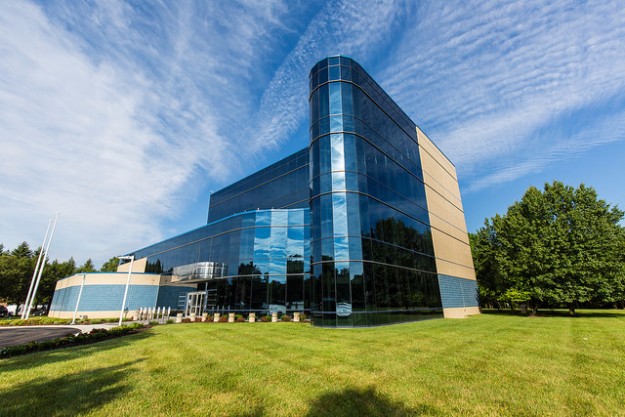 With the ribbon successfully cut, the crowd headed inside. Most were directed to the main auditorium (which seats 600), but an overflow room had also been set up to accommodate the estimated 700-person audience. The stragglers found themselves here, and one such individual jovially dubbed it the “loser room.” Though, with a wall-to-wall projector screen, we probably had a better view than some in the main room.

It took a few minutes before we had sound, however. In the meantime, several individuals tuned into the Facebook livestream on their phones and cranked the volume up to max so the rest of us could just make out a tinny stream of music to match the processional onscreen. Despite the technological trouble, everyone’s high spirits remained.

The sound came on in our room shortly after Dan Jackson took the stage in the main auditorium. He welcomed the guests and then Dave Weigley, president of the Columbia Union Conference, delivered an energetic address about his appreciation that the NAD had chosen the CUC for its new headquarters.

The highlight of the event was the “Historical Perspective” section. It was in 1913 that the “North American Division Conference” was formed, and it was in that same year that discussion first began on where the NAD headquarters should be. 104 years later and we finally have the answer: Columbia, Maryland.

President Jackson, Executive Secretary G. Alexander Bryant, and Treasurer G. Thomas Evans all paid tribute to those who had gone before in their respective positions. Dan Jackson was joined on stage by the first NAD president, Charles E. Bradford, and his wife Ethel. Bradford served as president from 1979 to 1990.

“Thank you so much for the ministry, the courage, the vision, that you utilized in bringing into being the North American Division. God bless you, God bless you,” Jackson told Bradford.

Jackson then asked if Bradford had any remarks for the audience. “Well, I didn’t see my name on the program,” Bradford replied, laughing. He continued, saying that the one question he’s gotten over and over again through the years has been, “where is the North American Division?”

“Well, thank God, I am able to say today, the North American Division is here! You can see it, you can feel it, you can hear it, and thank God you can be proud of it!” said Bradford, as the audience broke out in cheers and applause.

Next, Jackson was joined on stage by Scott McClure, son of Alfred C. McClure who served as NAD president from 1990 to 2000, and passed away in 2006. Don Schneider, NAD president from 2000 to 2010, was next to join Jackson at the podium where Jackson shared that he is often mistaken for Schneider when he visits churches.

Though Bryant never worked with Dale, he said he has heard many stories about his time with the NAD and described him as the quintessential secretary who carried books of meeting minutes around and could find exactly what was voted and when on any topic in question.

Baptiste is the longest serving secretary for the NAD (1990 to 2002). “We see many traces of his footprints in our office,” said Bryant.

When it came time to discuss Roscoe Howard’s legacy, Bryant was overcome with emotion and had to pause while the audience murmured reassurances. “Roscoe and I are brother-in-laws,” Bryant shared. “We married two sisters….He is having some health challenges today, and I just thought it would be good if the North American Division said a special prayer for him today.” Bryant invited Elder Kibble to the stage to lead the audience in prayer for all three former secretaries.

After prayer, Bryant concluded saying that he wanted the former secretaries to know that “whatever we have today, we have it because we stand on their shoulders.”

Next, NAD Treasurer G. Thomas Evans paid tribute to former treasurers George H. Crumley (1990 to 1998) and Juan Prestol-Puesan (1998 to 2007) who were both present at the ceremony.

During his dedicatory remarks, Dan Jackson shared the story of finding a document concerning a 70 year strategic plan written by Bob Dale in the president’s desk (which has been used by all former NAD presidents). After looking through it, as well as a book written by Bradford, he realized that his current administration was addressing all the same concerns the previous administrations had.

“It is no wonder that it took us 104 years to build a building, because we keep talking about the same stuff,” Jackson quipped.

To close out the ceremony, Wintley Phipps sang Amazing Grace, and then the NAD officials led the audience in an “Opening Litany” comprised of words from Solomon, David, Isaiah, Paul, Moses, Jesus, John, and Habakkuk.

Afterward, the audience was dismissed to tour the building. The 125,000 sq. ft. space was originally built by Arbitron Inc., the radio ratings organization. The NAD paid $19.5 million for it and spent an additional $11 million in renovations. The total cost was paid for with reserve funds. Each division is required under GC policy to keep an amount equal to 100% of its yearly operating budget in reserve. It was this money the NAD dipped into to pay for the building, bringing its reserves down to 93% of its operating budget; an amount officials say they are confident they will bring back up to 100% soon.

Though the initial expense is sizeable, the NAD is on track to save money down the road, a strategy made possible both by paying for the building outright and by no longer paying $1.2 million in annual rent to the GC for space a fraction of the size of the new facility.

It’s clear much thought was put into the building, and the effort to showcase the unique aspects of the NAD is evident. The building is full of natural light from a glass-paneled roof that sends cascades of prismatic rainbows into the Charles E. Bradford Conference Center. Throughout the building are 10 conference rooms, named after the nine North American Unions and the Guam-Micronesia Mission.

An Adventist health message wall, donated by the Adventist healthcare networks, provides an interactive exploration of the Adventist dedication to health and wellness throughout history. On the wall across from the health message is a dedicated space for student art. Paintings by recent PUC grad Casey Speegle are up right now. Artwork by Nathan Greene can be found throughout the rest of the building. Wooden paneling, hand-carved by a local Adventist artisan, adds warmth and offsets the otherwise glass and metal structure. I was most captivated by the C.D. Brooks Prayer Chapel where the focal point is a glass mosaic created by Monte Church. Nine lambs appear in the mosaic, representing the nine unions. Fragments of glass shaped like each state and province in the NAD are scattered throughout and a series of dots and dashes along the bottom represent a prayer for help to the Lord in Morse Code. The stained glass mosaic in the C.D. Brooks Prayer Chapel.

After a break for lunch, the first business session began with the President’s Report. Dan Jackson gave a rousing and joke-filled speech that elicited many “amens” and much laughter from the audience.

He began by telling the delegates that the chairs they were sitting in were the same chairs used at GC Session 2015. “I think the brethren sold them to us in the hope that their influence would rub off and that we would always be in harmony with the General Conference. It’s another approach at unity!” Jackson told the chuckling audience.

On a more serious note, he added that he wanted every delegate present to feel comfortable speaking their minds throughout the sessions, whether that means agreeing or disagreeing with something someone else has said, as long as it’s done with respect and love.

"This is a family. A healthy organization will have healthy discussion, and that includes disagreement,” said Jackson.

“I tell my wife that if we always agree, then one of us is redundant,” he added.

“Does she agree with that?” shouted someone from the audience, eliciting laughs all around.

Jackson spent time reiterating the NAD’s strong commitment to mission and to unity, stating that the NAD “has absolutely no plan to agitate or promote separation...we are part of the world church and will remain so." He reminded the audience that everyone in the room is a believer - a “lifer.” “We wouldn’t be here if we weren’t.”

He discussed the Church’s strengths:

The NAD’s outreach initiatives, which include a $14.7 million budget investment, thousands of campaigns, and evangelism efforts that have resulted in hundreds of baptisms.

Next, he discussed the proposed 2020 Strategic Initiatives which include a renewed dedication to communication, youth, and ongoing leadership training.

And finally, Jackson wrapped up with the Missional Initiatives:

These topics give a precursor for what to expect throughout the rest of the meetings, which go through end-of-day Tuesday, October 31.

After nearly two hours, Jackson apologized for going on for so long, but added quickly that he wasn’t really sorry - the information he had shared was important and vital to the mission of the Church.

When Executive Secretary Bryant called for a vote on the President’s Report it was heartily and unanimously approved by the body.

Since it was already after 5:00 p.m., the Secretary’s Report, which had been on the agenda for the day’s discussion, was bumped to the following morning.

I left the meetings feeling energized and optimistic for what is to come in the following days. It’s hard not to be optimistic when the mood in the room, led by Dan Jackson’s cheerful and corny quips, is as light and cheerful as the building we’re in.

All photos by Alisa Williams except where otherwise specified.