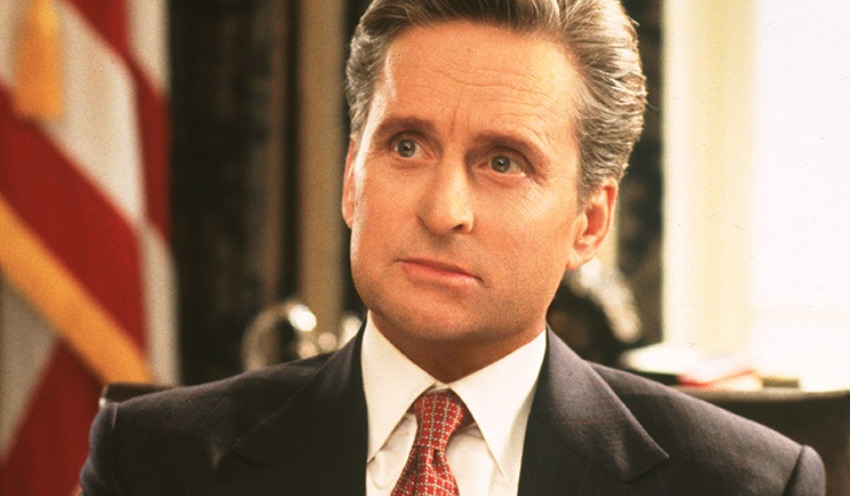 A couple of nights ago, my eyes fell on one of my favorite movies, The American President (1995). I felt it was my duty to watch it, as it is on the short list of movies that will grab my attention whenever and wherever I might come upon them.1 Starring Michael Douglas and Annette Bening, the movie tells the story of President Andrew Shephard (Douglas) and the political problems he faces when he decides to date a liberal lobbyist (Bening). In the final moments of the movie, Douglas interrupts the daily press briefing to finally address the political fallout from both his personal life and how it intersected with his political agenda. In the middle of his soliloquy he says

Everybody knows America isn't easy. America is advanced citizenship. You gotta want it bad, 'cause it's gonna put up a fight. It's gonna say, "You want free speech? Let's see you acknowledge a man whose words make your blood boil, who's standing center stage and advocating, at the top of his lungs, that which you would spend a lifetime opposing at the top of yours. You want to claim this land as the land of the free. . . .” Show me that, defend that, celebrate that in your classrooms. Then you can stand up and sing about the land of the free.

There are certainly things that we can disagree about, but I think we can find consensus around the idea that this message is as needed in our politics today as it was over 20 years ago when we first heard these words. Even more so when we exist in a political reality where the one person ultimately charged with defending the Constitution is the same man who wants to sanction the media, encourages employer retaliation against athletes exercising their right to non-violently protest, and attacks anyone who has the temerity to criticize him. I would argue that this nation was built on the principle of dissent and difference and that anyone seeking to undermine those principles should be opposed by all reasonable measures.

While it is easy to see the need for President Shephard’s message in our politics, it seems to me that we fail to see that his message is as applicable in our church as well. Now I will admit that churches are not built on the principles of dissent and difference. Instead, we share a common faith, motivated by the same Spirit. The bonds of Christ’s love that we say constrain us should continue to pull us together despite our differences. However, like America, I believe that church membership is advanced citizenship. Keeping a church together is going to be a fight. Amongst our membership we will have differences of belief on Sabbath observance, dress codes, dietary restrictions, the role of women in the church, and the place in our community for the LGBT community, among other things. How do we manage to stay together when we have such disparate theological and ethical beliefs?

Fortunately for us, the Bible gives us guidance. Acts 15 recounts the story of a church divided. Some felt that others in the fledgling faith were not living up to the clear standard of the Bible.2 After all, the Gentiles were entering into a Jewish faith, why should they not live under the standard of the Law of Moses? Had Jesus not said that he did not come to abolish the law? After much debate, both Peter and James, two men who were known at one time or another for being very concerned with rules of conduct, advocated for the rules not to apply to a certain group of people within the body. To be clear – The early Christian church created a structure in which different sets of rules applied to different groups of people based on the proclivities of their particular circumstance. And so they showed us how to have corporate unity in a world of theological difference. We would be wise to follow their example. The path to unity despite difference cannot be found in mistaking uniformity for unity, and it cannot be paved with poorly worded motions or reconciliatory ultimatums.

Toward the end of President Shephard’s speech, he laments the fact that our political discourse gets bogged down in the mundane and inconsequential. “We have serious problems to solve, and we need serious people to solve them,” he exclaims. Agreed. In a body tasked with a specific goal, it is a waste of everybody’s time to expend so much energy on infighting that only makes our mission more difficult.

1. Not that you asked, but that short list includes The Shawshank Redemption, Gladiator, The Matrix, Twelve Angry Men, It’s a Wonderful Life, and El Dorado.
2. And the truth of the matter is that they had way more evidence for circumcision than we have for most of the more modern problems we debate today.