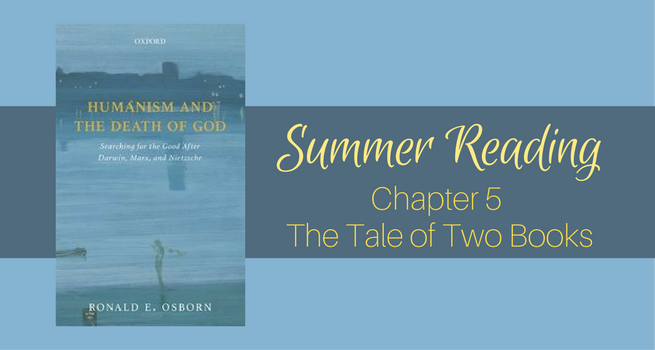 This is the final post in a seven-part series for Spectrum’s 2017 Summer Reading Group. Each post will be drawn from chapters of the book Humanism and the Death of God by Ronald E. Osborn. You can view the reading/posting schedule here.

(If you have not read part one of this review, please do so, as I say some very positive things about Ron’s excellent book. This section of the review is more critical, and you will not get a fair sense of the book if you just read this second part.)

Last week, I left off asking what Ron has to offer to replace the failed secular anti-humanism and humanism that he critiqued so well in the heart of the book. If humanity really cannot be good with a philosophy that does not include the Divine, or at least some form of transcendence, how do we respond to a system that wants to base rights and values on a purely horizontal, secular, and indeed materialistic outlook?

The short answer seems to be: apart from praising the humble, servant ethic of Christ and authentic Christianity, not much else is on offer. The book ends with an extended quote from Albert Camus calling on Christians to raise their collective voices, “loud and clear,” and “confront the bloody face of history” (232). But a simple call to greater Christian activism seems to beg the central question of the book: which is how the ideas of secular humanism are inadequate to support a sufficient ethic of public activism.

Heightened activism does not appear to fully respond to the crisis of ideas behind the belief in human dignity. Perhaps Christian activism would help vindicate the ethic of Christ in the eyes of the world—“by their fruits . . .”— a kind of activist response to a philosophical question.  There is some truth to this, I am sure, but it cannot be the whole answer. Ron would not have written a deeply profound book on the history of ideas, if the conclusion is that ideas do not matter, only actions do.

Subsequent discussions with Ron reveal that he viewed his project as primarily deconstructive and that he did not intend to offer a full-fledged alternative he is critiquing. Still, he acknowledges that he has left some markers and signposts as to where he thinks the answers might lie. It is these signposts that I will deal with in this final section.

Ron appears to reject out of hand any sort of appeal to a kind of natural theology, such as the burgeoning philosophical movement known as intelligent design (ID). Ron appears to agree with those skeptics that view ID as not science, but religion. Thus, it is disqualified from being used in public discourse, as it is too much of an appeal to special revelation.

I think this is a pity and the wrong move here. I believe that thinkers like Jonathan Meyer and William Dembski have convincingly shown that ID arguments, properly understood and formulated, are at least as scientific as the theory of evolution. Both evolution and ID draw on the same kind of evidence, make the same kind of philosophical arguments, merely arriving at different conclusions about questions of design and teleology in nature.

Seeing ID theory in this way would allow for a return of arguments regarding teleology in relation to people and their physical, emotional, and moral well-being. Such a move would, I believe, create resources to enhance a secular (this world), but non-materialistic humanism.  This would be perfectly consistent with Ron’s belief that there are meaningful, verifiable, if subjective evidences, of the transcendent, such as aesthetics, relationships of love and altruism, and the universality of the moral sense, which should be allowed to infuse and inform a public humanism. ID theory would support Ron’s arguments in this regard.

The support of ID theory for human dignity is hardly an original insight with me. It was a philosophy that was essentially understood by the American founders, and it lies at the core of our Declaration and Constitution. “We hold these truths to be self-evident,” asserts the Declaration, “that all men are created equal, and endowed by their Creator with certain inalienable rights.” The Constitution then affirms this philosophy with its anti-democratic, individual affirming bill of rights. This founding American philosophy of design and dignity needs the kind of intellectual re-invigoration that Ron has shown himself so capable of providing in his current book. I challenge him to consider it as a serious enterprise, as I believe it is where at least some of the solution lies that he is seeking.

Ron’s rejection of ID is also at odds, I believe, with his pointing to the Christ event as showing us a way forward. Christ’s incarnation, teachings, crucifixion, and resurrection are really a paradigmatic example of special revelation, much more so than ID theory. So which is it? Are we to reject appeals to a transcendent, even if done through the prism of the natural world, and thus intelligent design is out?  But if this is the case, then the incarnation, death, and resurrection, attested to by Scripture, is surely out.

Ron’s sign-posting of the significance of the Christ for humanistic values runs even more afoul of the “no religious argument” standard than does ID. In a sense, Ron appears to be straining at the gnat of intelligent design and wanting to swallow the camel of the incarnation. I would counsel the reverse: let ID in as a publicly legitimate philosophy that helps us see teleology in nature and the human. And let it be a public pointer to the more profound truth of the incarnation which surely takes a more significant step of private faith.

Another conundrum that Ron creates lies in connection with the other book of his I referenced earlier and alluded to in my title, Death Before the Fall. That book attempts to explain how God could create through the evolutionary processes of sin and suffering and still be a good God with a good creation. The problem with this argument in relation to Ron’s current book is that it underscores the reality that theism on its own does not guarantee universal human dignity.

Ron acknowledges this, pointing to the long history of the abuses of the Medieval church, as well as the historic and current violence of Islam. It is not just the existence of God that matters but the kind of God He is conceived to be. Well, if that is the case, then why is it that the God who can create through survival of the fittest, including competition, suffering, death and even mass extinction may not be compatible with the Nietzschean outlook after all?  Perhaps God is not dead; but he happens to be the monster deity that as children we fear lies under our beds or in the closet.

Ron would surely respond that Christ in His humiliation and love has revealed the true nature of God. Yet there is a long Protestant tradition, going back to Luther and Calvin, of the hidden God, the Deus absconditus, that lies back of the tender, loving figure of Christ—one that is capable of anything and everything. It offers a kind of dualistic account of God: in the foreground, the loving figure of a gracious and knowable Christ; but behind Him lies the figure of the unknowable God whose decrees for salvation and damnation are impenetrable to the human mind. Calvinism has a long tradition of this view of an apparently arbitrary God whose glory is in His power. I know that Ron rejects the theological voluntarism associated with this view. But I fear his view of theistic evolution or evolutionary creationism allows it to creep in the back door.

I have to agree with Cliff Goldstein on this point: To surrender to the materialists on the alleged fact of macro-evolution is really to ultimately import their materialist philosophy of ethics. Actually, it is perhaps worse than a materialist philosophy of ethics, which is that nature is pitiless, indifferent, and just does not care. But the theistic version says God actually approves of and intends the system of suffering and death, not as a matter of response to evil, but in an initial, pre-fall creation that He describes as good.

So, we have a tale of two books. A story in which, in my view, only one of Ron’s books can be mostly true. I vote for this recent one. But to make its argument really work, I think that Ron is going to have to take more seriously the reality and interconnectedness of two other books—God’s books of nature and revelation. Ron’s acknowledgement of transcendence in nature in the wonder of aesthetics and beauty, relationships and love, and a sense of morality and conscience is a good start. But I believe he should also consider the evidence and philosophy of intelligent design, for reasons discussed above. Second, as a religious matter, taking more seriously the biblical account of a good creation, without sin, suffering, and death, would remove the latent theological nominalism found in his current religious arguments that allow for versions of theistic evolution.

I know this argument will not set well with many in the Spectrum readership. But it has always puzzled me that a group so rightfully concerned and interested in character of God issues would embrace a theory of origins that raises so many questions about that Character. It turns out that many of the main theological theorists behind the “biblically conservative” embrace of theistic evolution or evolutionary creationism are Calvinists. I believe this is so because they embrace the theological voluntarism and nominalistic view of God that is less concerned with the character and love of God and most concerned with His glory as seen mainly in His power.  Ron’s book reminds us, if perhaps inadvertently, that that group is not really part of our team.

Nicholas Miller is Professor of Church History at the Adventist Theological Seminary at Andrews University where he is also Director of the International Religious Institute.  He recently published a book on the development of religious freedom and civil rights in the west entitled 500 Years of Liberty: From Martin Luther to Modern Civil Rights (Pacific Press, 2017).