The Woman Born to Preach and the General Conference: A Footnote from Patmos

The Woman Born to Preach and the General Conference: A Footnote from Patmos 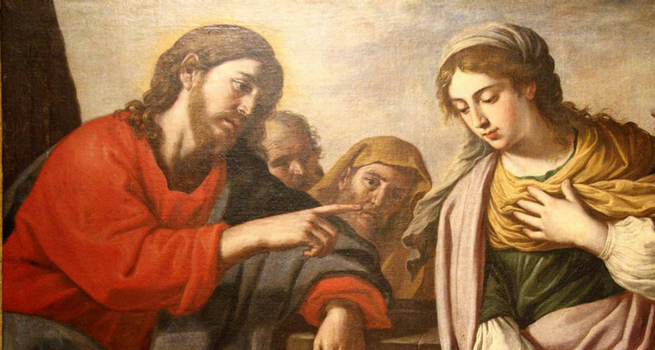 As he walked along, he saw a woman called from birth to preach. His disciples asked him, “Rabbi, who sinned, this woman or her parents, that she was born to preach?” (Author’s note: “Was it the liberalism or the feminism of the parents or of the woman that caused the problem?”) Jesus answered, “Neither this woman nor her parents sinned; neither liberalism nor feminism caused it. She was born to preach so that God’s works might be revealed in her. We must work the works of him who sent me while it is day; night is coming when no one can work. As long as I am in the world, I am the light of the world.”

When he had said this, he spat on the ground and made mud with the saliva and spread the mud on the woman’s eyes. (Author’s note: Dust and saliva were the stuff of the original act of creation in Genesis 2:7. Jesus is play-acting the creation of the first human beings all over again. The act and his identity are whole cloth.) He said to her, “Go, wash in the pool of Siloam” (which means Sent). (Author’s note: this comment, “which means Sent” is on the surface the least important in the text. But “Sent” is now a commission, an act of ordination. Henceforth, the woman born to preach will be “Sent.”) Then she went and washed and came back able to preach (Author’s note: The call is from birth, but the ability is not. The mud and the trip to Siloam are not optional with respect to ability to carry out the mission.)

The neighbors and those who had seen her before as irrelevant to the task of preaching began to ask, “Is this not the woman who used to sit and listen in the pew?” Some were saying, “It is her.” Others were saying, “No, but it is someone like her.” She kept saying, “I am the woman.”

But they kept asking her, “Then how were your eyes opened to make you able to preach?” She answered, “The man called Jesus made mud, spread it on my eyes, and said to me, ‘Go to Siloam and wash.’ Then I went and washed and received my sight so as to be able to teach and preach.”

They brought Bible scholars and administrators to the woman who had formerly been unable to see so as to preach. Now it was a Sabbath day when Jesus made the mud and opened her eyes. (Author’s note: The Sabbath is more than a memorial of and to creation. Above all, it is a signifier of God’s presence in the context of human need. It was not by chance that the healing happened on the Sabbath).

Then the Bible scholars and administrators also began to ask her how she had received her sight. She said to them, “He put mud on my eyes. Then I washed, and now I see.”

Some of the Bible scholars said, “This man is not from God, for he does not observe the Sabbath.” But others said, “How can a man who is not in tune with God perform such signs, making a woman who could not preach able to do it?” And they were divided (Author’s note: Divided, indeed!)

So they said again to the woman who had been called to preach, “What do you say about him? It was your eyes he opened.” She said, “He is a prophet.” (Author’s note: Prophets are not only upholders of tradition and defenders of orthodoxy. They are also visionaries who see and herald the things that have never been seen before.)

Her parents answered, “We know that this is our daughter and that she was unable to preach; but we do not know how it is that now she sees, nor do we know who opened her eyes so as to make her able to preach. Ask her; she is of age. She will speak for herself.”

Her parents said this because they were afraid of the believers in the tradition and the organization; for the Bible scholars and the administrators had already agreed that anyone who confessed Jesus to be the Messiah would be put out of the synagogue (Author’s note: They had criteria for what the Messiah ought to say and do, and Jesus fell short of their criteria.) Therefore, her parents said, “She is of age; ask her.”

So for the second time, they called the woman who had been unable to preach, and they said to her, “Give glory to God! We know that this man is not authorized by God to do such things.” She answered, “I do not know whether he is authorized. One thing I do know, that though I was unable to preach, now I see so as to be able to do it. He even sent me to a place called ‘Sent.’”

They said to her, “What did he do to you? How did he open your eyes?” She answered them, “I have told you already, and you would not listen. Why do you want to hear it again? Do you also want to become believers in the same things?” (Author’s note: Another hearing, another vote, another Bible study, another round of prayer may not help.) Then they reviled her, saying, “You are his believer, and you are a believer in liberalism and feminism, as well, but we are committed to the tradition and the organization. We know that God has spoken to us in the tradition, but as for this man, he reads from another script, and we do not know where he comes from.”

The woman answered, “Here is an astonishing thing! You do not know his script or where he comes from, and yet he opened my eyes so as to make me able to preach. He even sent me to ‘Sent.’ We know that God does not listen to those who are malicious, but he does listen to one who worships him and obeys his will. Never since the world began has it been heard that anyone opened the eyes of a woman born blind and unable to preach. If this man were not from God, he could do nothing.”

They answered her, “You were born entirely in the sins of insubordination, liberalism, and feminism, and you are trying to teach us?” And they drove her out.

Jesus heard that they had driven her out, and when he found her, he said, “Do you believe in the Son of Man and in the calling he has given you?” She answered, “And who is he, sir? Tell me, so that I may believe in him and be faithful to his call.” Jesus said to her, “You have seen him, and the one speaking with you is he.” She said, “Lord, I believe.” And she worshiped him.

Jesus said to whom it may concern, “I came into this world for illumination so that those who do not see may see and be fit to preach, and those who do see may become blind and unable.”

Some of the Bible scholars and administrators near him heard this and said to him, “Surely we are not in the category of the blind, are we?”

Jesus said to them, “If you were blind, you would not have responsibility for doing this. But now that you say, ‘We see’ your responsibility remains” (John 9:1-41).

The argument of the woman in the story is from the beginning to the end an argument from self-evidence. It is also an argument that counts on novelty, the unprecedented deed, to be part of God’s doing in the world.