A Call to Action

A Call to Action 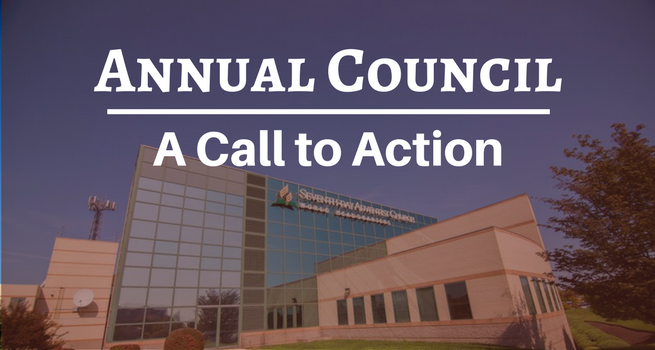 This morning I received notice from an administrator attending the Annual Council (AC) that there is going to be a plan set before the AC to penalize members of the General Conference Executive Committee who cannot vouch that they are complying with GC policies. Such individuals will not have voice or vote beginning with the 2018 AC. Committee members will be asked when registering to indicate no conflict of interest, which will be done through a click of a button. Then there will be another box to click if the member believes he or she is following policy. If a member indicates that they do follow policy and the GC leadership is suspicious then there will be an investigation.

One problematic and very troubling aspect of this move is the way that the recommendation is making its way to the AC floor. This needs to be shared. Last Sunday, the GC Division Officers met and debated the recommendation. When the vote was taken it was 29 against and 26 for. IN SHORT, THE VOTE FAILED.

BUT, somebody decided that members of the Division Officers group not present could vote. Those members had apparently not been a part of the conversation and may not have been informed that those who had been in the conversation had voted the recommendation down. Thus they did not understand the depth of the controversy. But these added votes based on partial information carried the day and gave the GC administration the majority it desired.

My correspondent noted that it is sad indeed when the leaders of the denomination have to resort to such tactics, and all in the name of unity.

What follows is an unedited copy of my reply to these developments, composed and sent immediately after my reception of the above message.

Thanks for the update, but it is not a good way to start my day.

Sounds like Ted Wilson is seeking to cut off all roads of escape with no leeway for written or verbal protest in the future. As a result, the time to stand unitedly and forcefully may be rapidly approaching before the voice of the London types is cut off. TW seems to be forcing the issue of a united public stand by the opposition that would be disruptive and messy but would make the point that such Stalinist tactics are not in the best interest of the mission of the church. BUT IT APPEARS THAT WINNING HAS BECOME MORE IMPORTANT THAN MISSION OR TRUE CHRISTIAN UNITY. The approach is SICK. But the popes of old could certainly have appreciated it. As at Worms, just a yes or no with no opportunity for explanation. Perhaps my Roman Catholic temptation idea is not far from the truth.

The one ray of hope is the irregular way this came to the floor and the extremely narrow vote. Those points need to be capitalized on and vigorously highlighted in the AC. Ted, it appears, has found the true way to split this denomination. He makes G. I. Butler at his worst look mild. Unfortunately, there is no EGW to confront this president. There is only the courage of those leaders who realize that if they do not forcefully stand now, there may not be another good opportunity before night falls on the church we love.

May God give you and your colleagues wisdom, courage, love, respectfulness, balance, and guts (guts that may get splattered on the wall. But it’s better to go down fighting for a righteous cause than to go down silently at the hands of an obsessed leader who apparently cares not for the consequences of his action since he is "God's anointed"). Hopefully, the narrow margin can be exploited so as to help those on the fence to vote while they have time. This thing needs to be fought with all the sanctified courage and wisdom that God provides.

My prayers will be with you and your colleagues who may be fighting the most serious and momentous struggle since this church has come into being.

Blessings in a difficult situation,

The three following quotations were not in my original reply, but have been added to provide a bit more perspective.

"In a land of boasted freedom of thought and of conscience, like ours, church force cannot produce unity; but has caused divisions, and has given rise to religious sects and parties almost innumerable." James White, Signs of the Times, June 4, 1874

"The church may pass resolution upon resolution to put down disagreement of opinions, but we cannot force the mind and will, and thus root out disagreement." E. G. White, MS 24, 1892

"In no conference should propositions be rushed through without time being taken by the brethren to weigh carefully all sides of the question.... Very many matters have been taken up and carried by vote, that have involved far more than was anticipated and far more than those who voted would have been willing to assent to had they taken the time to consider the question from all sides." E. G. White, Testimonies, vol. 9, p. 278

What is the nature of true Christian unity?

What is the price of unity?

George R. Knight has served the church as a university professor, pastor, school administrator, and an elementary and secondary teacher. His last assignment was Andrews University where he taught for 30 years. Knight is an avid student of both the Bible and Adventist history. He has written 45 books and edited another 40. In addition to Bible commentaries, including the one for the current Sabbath School lessons on Galatians and Romans, he has written on the historical development of Adventist organizational structure and the need for reform within the denomination. His most recent book was released in September and is titled, “Adventist Authority Wars, Ordination, and the Roman Catholic Temptation.”