Evidence That Demands a Verdict: Updated Apologetics Classic Out This Week

Evidence That Demands a Verdict: Updated Apologetics Classic Out This Week Father and son Josh and Sean McDowell talk about their new revised edition of Evidence That Demands a Verdict, published this week by Thomas Nelson, which works to help a new generation of Christians buttress their beliefs in an increasingly secular world.

Question: A new edition of your book, Evidence That Demands a Verdict: Life-Changing Truth for a Skeptical World, was published this week. Why did this book need to be expanded and updated?

Answer: Truth doesn’t change, but its critics do. There are a ton of new issues that have arisen in culture over the past few decades that we felt it was necessary to address, such as the claim that Christianity is a copycat religion, that there were other “Gospels” left out of the Bible, that the Exodus was not historical, and so on. We also wanted to respond to some of the biggest objections raised against the 1999 edition of Evidence.

How have critics of Christianity changed since 1972 when the original book was published?

When Evidence was first published, it was not necessary to make a case for the importance and knowability of truth. People assumed there was such a thing as truth, and that if we tried hard enough, we could discover it.

Now there is huge pushback on the concept of truth itself. In fact, many people say truth itself is oppressive. So, in this updated edition, we included multiple chapters on the nature, knowability, and importance of truth.

Your book defends the truth of the Bible. Who is your audience? People who are atheists or agnostics? Christians who want to be able to argue with unbelievers for their faith? Christians who do not believe all of the Bible is the inspired word of God?

Josh: I first wrote Evidence primarily for Christians. My goal was to help them gain confidence in the reliability of the Bible as well as the deity and resurrection of Jesus. The purpose is not for Christians to argue with other people, but to build up their own confidence by having good reasons for their faith, and then be able to lovingly share those with others who are interested (1 Peter 3:15).

And yet, many skeptics have read Evidence, too. We both regularly hear from believers for whom Evidence played a vital role in their journey to faith.

Evidence That Demands a Verdict is 800 pages long. Is it written as a long narrative, or in such a way that people can look up topics they are interested in, and use the book as a reference? What is the format of the book?

Josh: Ironically, when I first wrote Evidence, no publisher wanted it! The reason is because I included lengthy quotes for context. The book does not read like a narrative although we do include many personal stories. Rather, it’s a massive compilation of the evidence for Christianity in outline form. People use it for personal study, students use it for research, pastors use it when writing sermons, and teachers use it to prepare lessons.

And yet, we are amazed at how many people have read through the book in its entirety. If you want to go deeper in your faith and explore reasons for the truth of Christianity, this is a great place to start. 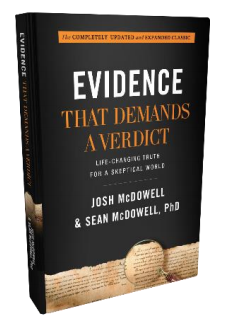 How long did it take you and and Josh to put this updated version of the book together?

Sean: The writing, researching, and editing process was about three years. Next to my dissertation, this is the biggest writing project I have ever worked on. We had over 30 grad students and a dozen top scholars helping us in different capacities.

The original edition sold more than four million copies. How many do you expect this version to sell?

It is honestly really hard to know. Culture has changed so much since it first came out in 1972. Part of its initial appeal was that people simply didn’t have access to the information and no one else was doing popular historical apologetics.

Now there are a ton of great apologists such as Ravi Zacharias, William Lane Craig, Lee Strobel, J. Warner Wallace, and more. And yet because our culture is growing more secular, there is an increased hunger for good apologetics materials.

What does your book offer that other works of Christian apologetics may not?

There are two qualities that set Evidence apart. First, it has proven to be a reliable and trustworthy resource over four decades. In an age when there is endless skepticism and distrust, the “brand” of Evidence provides people with a resource they can trust.

Is your book meant for all Christians, regardless of their denomination? Surely theological beliefs differ among different churches, so maybe your book is not for everyone? Is your book applicable to Seventh-day Adventist Christians?

What is it like working together as a father-son team?

Sean: We have written a number of books together and spoken at a variety of events. But there was something extra special about updating this book. For me, I can hardly go anywhere without someone sharing how this book either led them to Christ or helped them hang on to their faith in high school or college.

Evidence is perhaps my dad’s most significant contribution to the body of Christ. To be able to help with the update was both humbling and thrilling.

The Christian worldview used to be in general agreement (at least in principle) with the broader culture. But now we live in a post-Christian society. In many ways, it could even be considered an anti-Christian culture. Because of changing norms of sex, marriage, and gender, conservative Christianity will increasingly be considered an extremist and fringe movement. There will be increased tensions between secular and Christian values, which may put Christians in the position of having to sacrifice and suffer if they truly want to live out their faith with integrity. Knowing what we believe, and why, can help us respond lovingly when our culture increasingly sees our views as false and dangerous.

Where can people buy Evidence That Demands a Verdict?

Here are three options to consider: (1) www.josh.org/evidence, (2) www.SeanMcDowell.org,  and (3) Amazon.com.

Josh McDowell is an Evangelical speaker and writer, who runs Josh McDowell Ministry, and has authored or co-authored 148 books. His son, Sean McDowell, is an assistant professor in Biola University’s Christian Apologetics program and the resident scholar for Summit California. Sean is the author, co-author, or editor of 18 books and is a frequent guest on Christian radio shows.