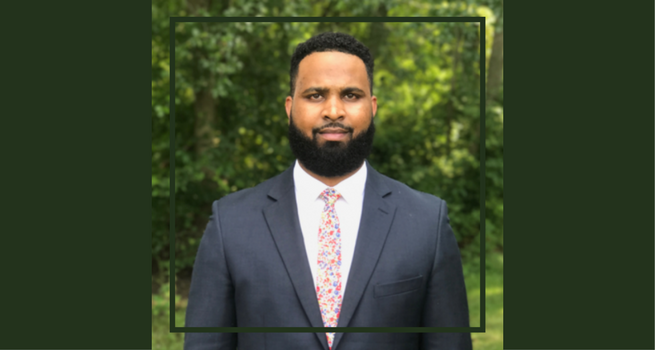 Alumnus Michael Nixon, the recently-named vice president for diversity and inclusion at Andrews University, talks about the genesis of his job, his experience as a black student in the Andrews community, and how he hopes to make Andrews a more inclusive place.

Question: You have been appointed the first vice president for diversity and inclusion at Andrews University. What does that mean?

Answer: As it pertains to my general function, the vice president for diversity and inclusion is the Chief Diversity Officer (CDO) of Andrews University and provides spiritual, administrative and academic leadership for the equity and diversity vision, resources, and programs across the University.

What is your primary job?

Things will start to take more shape as time goes on, but one of the main things I am doing right now is helping to restructure and empower Andrews University’s Diversity Council which has been advocating for this position for over a decade. I am working closely with the council to analyze and assess what things have been working, what has not been working, and what things we need to do going forward in order to realize what I like to call our collaborative vision. We want to centralize the diversity and inclusion efforts that have been operating under different umbrellas thus far.

When did you take up the role? What has taken up most of your time so far? What do you when you go to work every day?

I started in this role during the first week of August. I can honestly say that every week has been different. Since I started so close to the beginning of the school year, much of my time was geared toward getting prepared for the “festivities” that kick off our school year.

I think the thing that has taken up most of my time thus far has been meetings. I will say that I have been able to spend a considerable amount of time speaking to folks all across campus. I have had some great conversations with students, faculty, staff, and administrators as I strive to get a feel for what their experience is like on campus. The president and I have talked about these initial three to six months being spent assessing where things are and going on a bit of a listening tour to see how we can best approach equity and inclusion across our campus.

Andrews University president Andrea Luxton promised to create this role at the university last spring, after a campaign from students calling on Andrews to “apologize for the systemic racism it has perpetuated on its campus.” You grew up in the Andrews community. Would you characterize the campus as "systemically racist"?

Before I answer the meat of the question, I want to make it clear that while the campaign you are referencing was definitely the final catalyst to help push the university forward in making some substantive changes on campus, it was not the only reason why this new position was created. I say that to make sure that we do not overlook the advocacy of members of the Diversity Council, including Dr. Walter Douglas who co-founded the Council back in 2003-2004. It was a part of his overall vision for a Multi-Cultural Institute on AU campus—and that vision also included his request that a vice president for diversity head up that institute. This has been a long road for our university, and this new position is built upon the foundation of all of that work—not just the prophetic courage of the It Is Time participants.

I attended Ruth Murdoch Elementary School in Berrien Springs, and Andrews Academy, and then finished my college degree at Andrews (I spent one year at Antillean Adventist University in Puerto Rico and one year at Oakwood University in Huntsville). I think that it is important to define words like "racism," whether interpersonal, systemic or institutional. I would describe systemic racism as policies and practices entrenched in established institutions which result in the exclusion or promotion of designated groups. Systemic racism does not require individual intent or prejudice to occur.

In comments that she reiterated after the It Is Time Dialogue, President Luxton pointed out that “[a]s an organization we have been guilty of racial bias, or making African-American employees and students feel ‘less than.’ We have not listened well. We have not been sensitive and have not taken action when action should have been taken. For that I am profoundly sorry.” I would simply say that I resonate with her description of how Andrews has operated historically. Her comments were the first acknowledgement of these realities in the long history of this institution. "Systemic racism" is not about individual intent or personal bigotry.  It is about inequalities rooted in the system-wide operation of a society that excludes substantial numbers of members of particular groups from significant participation in major social institutions.

What was your experience like as a black student at Andrews?

My time at Andrews was good. I was actually on campus at an interesting time (2007-2009). 2007 was, of course, at the beginning of the Obama campaign. As a political science major,  I was invlvled in many discussions about race and politics in the classroom. I was part of a multicultural group of students who were politically engaged that worked to get folks registered to vote in neighboring Benton Harbor. “What a time to be alive,” as they say. I was also hearing some voices on the “other side” of various discussions that alarmed me . . . but not to a large degree at the time. I was caught up in the euphoria of truly believing that I could do or be anything I put my mind to in this country. My time at Andrews University was a great opportunity to come into my own in a diverse setting.

What else is Andrews doing to ensure that it really is a place of inclusion and diversity?

I can tell you that our president and provost have made equity and inclusion true points of emphasis for our institution at large. My appointment has just been one piece of that.

Dr. Carole Woolford-Hunt has created and has begun to implement a Diversity & Inclusion training program that has been rolled out over the past couple of years and will help students, faculty, staff, and administrators become better equipped to not only operate better in a diverse setting but also gain the tools to cultivate those settings after they leave Andrews. The university is also committing to the “Connected Through Our Stories” initiative. Andrews Stories started last year under the direction of Becky St. Clair in our Integrated Media & Communications department, and it has gone a long way in making us all feel more connected on campus. The more we dialogue with one another and value each other’s story and perspective, the better foundation we will have for more sensitive/difficult dialogue.

Do you see this problem on other Adventist university campuses?

I think that all of our campuses could benefit from emphasizing diversity, equity, and inclusion. I have not been to all of our campuses, but I do know that we have been blessed at Andrews with a large variety of representational ethnic and international diversity. The key for us now is to figure out how to seize the potential that diversity gives us to truly transform our campus for the better.

In a country that is become more increasingly diverse, it is important for all of our campuses to become more inclusive of folks from all different backgrounds, religions, ideologies, and perspectives. We can no longer assume that everyone on our campus thinks the same way or speaks the same cultural language that most Adventists do. We can no longer say to the world: “Yes, you can come and join us, but it has to be on our terms.” We have to do better.

You studied law after graduating. What is it like to now come back to Andrews as an employee of the university and as part of the administration?

I have told most people that I am treating my return as if I have never been here before. In many ways, this is all brand new to me. I get to see and analyze things from a completely different perspective.

But I also don’t want to forget my previous experiences on campus as I try to connect and resonate with our current campus community.

I loved my time working as an attorney in New York. I was able to do some highly gratifying work at the Fair Housing Justice Center where we worked to combat housing discrimination in New York City. I will use that experience as an advocate for people at the foundational level of housing to help me as I try to advocate for the various members of our campus community in this new role.

I am here for everyone, and it is my goal and wish to help everyone feel like Andrews is their place. If there are any systems or structures that are standing in the way of that, they must be removed.

Academic freedom has been another hot topic on some North American Adventist campuses. Invitations to controversial outside speakers has caused sparks at PUC and at Andrews. How do you balance the freedom to explore diverse ideas and beliefs and the need to respect opposing beliefs and protect the ethos of the institution?

The president recently created a committee to address this very issue. Stay tuned on this one!

What do you in your free time?

I like to spend time with my family, listen to music, and watch sports. Other than that, I also try to commit some hours each week to helping to grow a non-profit I co-founded with Ty Gibson called Against the Wall. It is our hope to spark a movement of Christ followers who are motivated to speak with passionate clarity against walls of racial separation and injustice across the globe, both inside and outside of the Adventist Church.

Against the Wall doubles as a metaphor to communicate that we are opposed to the wall of racial separation and that we stand in solidarity with those who find themselves oppressed by walls of racism. Right now, we are mainly doing that through releasing blog articles, but we are also planning to have our first public event during the first weekend of February here at Andrews. More details in regard to that will be released on our website soon, but we are hoping that it is a weekend like no other that has been seen in our church’s history! Be sure to come join us!

What books have shaped your beliefs and ideals?

Why Jesus? by William Willimon

True Self, False Self by Richard Rohr