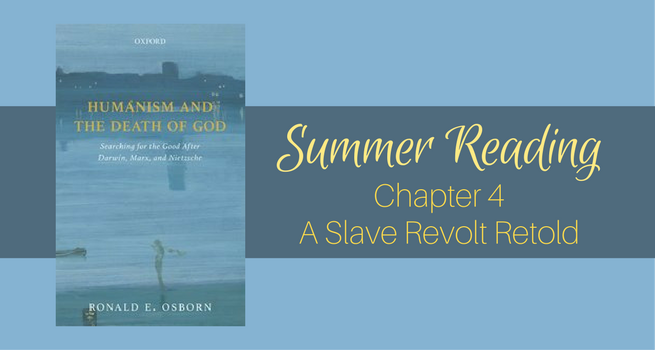 This is the fifth post in a seven-part series for Spectrum’s 2017 Summer Reading Group. Each post will be drawn from chapters of the book Humanism and the Death of God by Ronald E. Osborn. You can view the reading/posting schedule here.

In arguing for a “crude reading of Nietzsche” against commenter Ole-Edvin Utaker’s “friendlier” reading, Ron Osborn stood up for his own take of Nietzsche the other day: “I think we must allow Nietzsche the full integrity of his revolt rather than trying to appropriate him for our own Christian or liberal purposes.”

Replace Nietzsche with Paul (and other New Testament writers), and Osborn’s comment sums up my initial reaction to his Nietzschean jujitsu of Nietzsche’s genealogy of morality, even as I am awed by what he has wrought on these pages.

For sure, contrary to Osborn’s own modest concession that his narrative is “insufficiently nuanced” and not “a comprehensive apologia of New Testament ‘problem passages,’” “The Genealogy of a Slave Revolt Retold” is a richly nuanced and deftly argued Osbornian apology of the New Testament and 1st century Christianity as a counter-pagan tour de force that gifted the world with a vision of moral equality of all persons.

During my first read, the recovering preacher in me, inspired, immediately started envisioning a five-part, maybe ten-part, sermon series based on this upending genealogy of morality. Adventist preachers should indeed welcome this revelatory wider-angle view of the Great Controversy.

Even as I gear up to quibble with Osborn below, I want to be on record as declaring: I am with him. He provides a blueprint with which Christians—Adventists, in particular—can respond to any culture, ideology, philosophy, and theology. In that sense, this narrative is a sufficiently nuanced, comprehensive, stand-alone apologia of the Christian contribution to the world’s understanding of human dignity and equality.

If only to fulfill any self-respecting book reviewer’s mission to nitpick, I offer two quibbles.

As stunningly beautiful as “The Genealogy of a Slave Revolt Retold” narrative is, I fear Osborn’s intended chiaroscuro of “contrasting darkness and light in order to make the light shine all the brighter” (170) tends to be too generous with the New Testament and 1st century Christianity. I fear that he does not allow Paul, for example, the full integrity of his messy 1st century in-situ-ness and appropriates Paul as too strong a moral visionary of equality and political subversive in service of Osborn’s—and our shared—liberal purposes.

To touch first on the scuro, darkness, Osborn surveys ideas about human inequality in ancient belief systems, while focusing on the Greco-Roman, and argues that classical views of shared dignity and equality (such as what Aristotle captures in Nichomachean Ethics) failed to override “classical beliefs in the natural inequality of persons” (such as what Aristotle also subscribes to in Politics). Osborn appears to join Davina Lopez’s gender-critical analysis of Paul as well as other empire-critical interpretations of the New Testament in privileging the “problem passages” of classical antiquity and the Roman imperial practices and artifacts as illustrating the “deeper meaning” and true reality of the classical/pagan consciousness of anti-equality. With Lopez, Osborn points to Roman coins depicting nations conquered by Rome as violated women trampled by deified emperors and gods and the myth of the Rape of the Sabine Women as “the paradigmatic model of, and justification for, Roman expansionism” whose purpose “was to make imperial violence appear noble” (161-2).

While I too appreciate Lopez’s approach of re-imagining the real world of Paul’s letters by looking at coins, sculptures, and myths, I wonder whether we end up creating an overly dark caricature of the Roman world—without allowing ancients to be of their times (whether we like it or not)—in order to make the Pauline and 1st-century Christian light “shine all the brighter.”

We can denounce Aristotle’s view of the natural order that permitted tyrannical force by masters upon slaves and helped sustain systems of slavery and the imperial rape of the nations while crediting that same view with ultimately providing an ontological key to progressive human equality in the medieval and modern world. That histories of human rights never fail to acknowledge the teachings of Aristotle, the Stoics, and other classical authors (notwithstanding their “problem passages”) says something about the value and contribution that these ancients and their world provided to the development of our understanding of human dignity and equality.

Thus, my first quibble is that the scuro of Rome is too scuro.

My next quibble is with Osborn’s chiaro, light. He acknowledges that the Hebrew Bible and the New Testament contain a number of “problem passages” that “continue to reflect the dominant values of the ancient world” and “taken in isolation, might be used to endorse oppression, inequality, or violence” (165). But Osborn’s thesis remains that classical beliefs in the natural inequality of persons was “radically undermined by the scandalous particularity of the Christian narrative.”

As examples of the “radically equalizing message” of Christianity, Osborn points to the parable of the sheep and the goat (“whatever you did to . . . least of these”), the story of Philemon and Onesimus (sending Onesimus, a runaway slave, back to Philemon, his master, but telling Philemon to treat Onesimus as “a beloved brother”), and Paul’s admonition to husbands and wives to submit to each other. Osborn also addresses the “frightening images of seemingly divinely authorized violence” in Revelation, which he views as “a mode of anti-imperial critique.” He does not appear to think that the use of violent images and rhetoric undermine the “radical core” of the New Testament.

My problem is that I see the “problem passages” not as problematic but as emblematic of how early Christians actually understood and lived out their ideals.

Regarding the violent imagery in Revelation, I am reminded of Osborn’s earlier critique of Marx(ists): “Once violence is seen as a purely tactical or instrumental matter, . . . it is no great leap to the idea that violence might actually be a positive good in itself.” Osborn is much quicker to implicate Marx with his followers’ violence than he is with Scripture vis-à-vis Christian violence and imperialism. I think Osborn’s critique of Marx could very well be extended to Revelation’s instrumental use of violent imagery, even if it is not prescriptive. (Because Osborn does not address it directly in this section, I avoid a discussion on whether Scripture provides a source of Christian violence. As Lisa Clark Diller gently points out, “Dostoevsky might not be enough.”)

It is probably more intellectually honest to say that early Christians, even as they pledged to love their enemies and pray for those who persecuted them, believed in a God who also avenges enemies and persecutors (“Vengeance is mine, I will repay, says the Lord” as quoted in Romans 12) and who slays those who failed to live up to the extraordinary communal sharing standard of early Christianity (Ananias and Sapphira). The church that was “united in heart and mind” in sharing “everything they had” (Acts 4) was also where “great fear gripped” its members when hearing of the story of Ananias and Sapphira (Acts 5).

For a Nietzschean respondent, Acts 5 and Revelation may very well serve the role of coins depicting the actual currency that Scripture’s lofty ideals of human equality and dignity had in early Christianity. The Story of Ananias and Sapphira may very well be Christianity’s Rape of the Sabine Women—a founding myth illustrating an individual’s, a family’s, violent relationship to God, church authority, community, and property.

I am not that respondent. But I think it is a stretch to view the New Testament as the kind of intentionally subversive document against the imperial violence and prevailing social hierarchy that Osborn, Lopez, Crossan, and others wish it to be. To be sure, there are ingredients of subversion.  But it seems a stretch to call the New Testament a “radical” book, at least in the sense that Osborn wants it to be.

Even as Paul confessed that, in Christ, there was “neither Jew nor Greek, neither slave nor free, neither male nor female” (Galatians 3:28), Paul and 1st-century Christians lived and embraced a world where distinctions between Jews and Greeks, slaves and free, and men and women remained. There is no indication that Paul actually advocated for, or even provided ground for, abolition of these distinctions. (As an aside, I am comfortable with using Galatians 3:28 as a rallying cry for equality, but we should acknowledge such use to be a re-appropriation of the text, much like the way Paul used Old Testament texts.)

We must recall that, as the parable of the sheep and the goats ends, the sheep enter eternal life, while the goats (those who do not feed, clothe, and care for the least among them) “go away into eternal punishment,” which is later described in fiery and furious terms in Revelation (of Jesus Christ). That surely represents justice, as Osborn asserts. But Jesus—a Godforsaken God and a Footwashing and Self-sacrificing God—also is a forsaking God who calls us children of God and slaves (doulos) of God. Just as the image of violence is lurking at every corner of extraordinary grace, the image of slavery is infused in multiple layers of New Testament relationships.

Thus, my second quibble is that the chiaro that the New Testament represents appears to be too chiaro.

Rather than agreeing with Hart’s Nietzschean proclamation that the Christian gospel represented “cosmic sedition,” I wish Osborn had drawn more of a double chiaroscuro—one each for the classical world and the 1st-century Christian world, each showing the depth of struggles with its own ideals and failures. Perhaps that would help us see better why the world needed, and continues to need, the Christian message.

Again, these are quibbles and probably in the realm of nuance that Osborn caveated. I do think, though, that taking the New Testament to task with the same intensity as Osborn does with Nietzsche—and painting a grayer, more complex picture of the message and experience of 1st-century Christians—would have made this apologia even more compelling and persuasive.