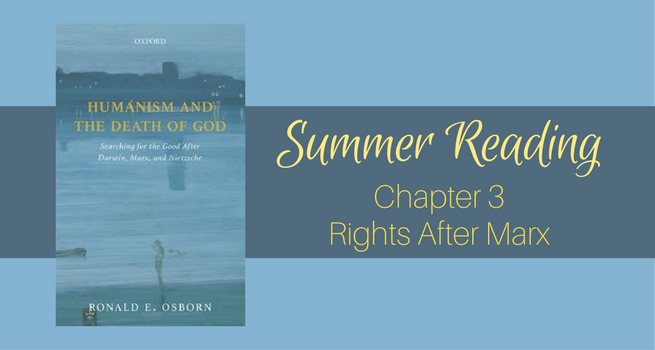 This is the third post in a seven-part series for Spectrum’s 2017 Summer Reading Group. Each post will be drawn from chapters of the book Humanism and the Death of God by Ronald E. Osborn. You can view the reading/posting schedule here.

Does anyone actually believe in Marxist ideas anymore? Obviously, I can hear you saying, it is a failed movement, with plenty of historical evidence of its inferiority compared with other systems such as democratic liberalism. In fact, the way we think we know about Marx’s influence—with a straight line from him to Stalin, for instance—sometimes impedes our abilities to acknowledge his continuing legacy. Each year I attempt to get my students to think about the way that Marx’s approach to the study of history has shaped us all—even those of us who may be committed capitalists.

And I wish that Osborn’s chapter on the legacy of Marx had helped the non-academic reader a bit more in this arena. Because for most people outside the academy or leftist circles, Marx is a washout and not someone that we would look to for the language of rights. We do not remember the ways he tried to scientifically make the case for the masses of people—critiquing the Enlightenment’s case for civil rights by looking at them from the bottom up. Marx laid out what he thought was a scientific way of understanding historical change—instead of ideas or great men driving history; it was economic exploitation and class rebellion against it that caused change. His evidence was the specific Western European context he was observing though his assumption that there would be greater and greater conflict between classes underestimated how strong nationalism would be in bonding people together against a common enemy, with even greater violent results than class warfare ever accomplished. Our human rights work today takes economic autonomy so seriously that we can forget that it was Marx who taught most of us to see that talking about rights without seriously investigating economic exploitation is superficial and self-serving.

Osborn assumes that his readers are familiar with Marx’s commitment to revolution and to the betterment of life for the “huddled masses” and moves quickly into the critique of his attempt to “ground normative politics in a postmetaphysical logic of self-creation through revolutionary violence” (p. 78). But ultimately, he thoroughly slices through Marx’s posturing by asking why should anyone work for the masses or try to achieve equality. Marx provides no good reasons for his commitment to the people at the bottom of society. And what good is the brave new world if there is not love?

Marx believed he was trying to do for human history what Darwin did for biological history. But Osborn points out that Darwin would not have sympathized with the economics of Marx, siding with middle-class factory owners rather than working classes. Increasingly, socialists wanted to distance themselves from the implications of social Darwinism with its lack of care for the weak and disenfranchised. But in fact, Darwinism could be used for all the range of economic and political ideals of the time—what it could not do is “provide a normative criteria to judge between such conflicting political ideologies” (p. 83). But Marx was consistently Darwinian in his attempt to make materialistic arguments for his judgments about good and bad ways to organize society.

For Marx, Osborn argues, truth was “the historically contingent product of materially grounded social relationships” (p. 85). Metaphysical and spiritual longings were caused by economic oppression and invented by people to help them with that—he was not so much attacking religion as attacking the things that oppressed people. So his epistemology was totally materialistic—all morality, goodness, human dignity, and truth are socially constructed. But, of course, this was often contradictory to what he was trying to accomplish and even undermined his own belief in human agency. Marx ended up using whatever was at hand to do what he wanted to do—which included the language of virtue and morality that made so much sense to many in his audience.

Because he was teleological in his view of history, not only did the ends justify the means, it actually required the “means” of violence. Osborn roots much of Marx’s temperament and leanings in the tradition of the Hebrew prophets and argues that he relies on religion as much as he rejects it. I would add that there is more than just the Hebrew prophets here-—there is also something of the book of Revelation at play. Marx and his followers were really following many of the Christian apocalyptic traditions before them which leaned on violence for the setting up of the Kingdom.

Most significantly for this book and most readers here, Osborn criticizes Marxian scholars who defend Marx from the violence of his followers—arguing that the horror of Stalin follows “logically, even if not inevitably” (p.100) from Marx. It is important that Osborn contrasts this legacy with the history of violence by Christians, asserting that the latter is an obvious betrayal of the founder of Christianity, while bloodshed is a clear development from Marx. He carefully includes a long section of quotes from leftist leaders and thinkers over the last century who have embraced violence as a positive good—deeply depressing to this reader, if not terrifying.

To counter this anti-humanism, which he admits is in “tension with [Marx’s] still humanistic aspirations” (p.112), Osborn uses Dostoevsky whose character Ivan Karamazov shows how much we want love and compassion even as we try to be rational and are disappointed by human imperfection. Dostoevsky himself saw that secular reformers who were respectable liberals still had a genealogical connection to the “radical and corrosive materialism” and finally “murderous nihilism” of later generations of political actors (p. 118). I wish that Osborn had fleshed out the connection here a bit more, as Dostoevsky might not be enough. Still, he thoroughly makes the case that the real question is: why would we love others or value their rights at all in a Marxist world, when all we need is violent action to create the new world he is trying to claim is the future we should all be working for?

The strongest and most compelling argument in this chapter for me is that our “spontaneous feelings,” subjective though they may indeed be, “are in fact evidence of the divine origins of human nature and God’s presence in the human heart” (p. 121). Even Marx understood that “materialist abstractions” were not a replacement for the motivations that come from affection and sympathy with fellow humans. Marx and his followers could not make the building or beauty of community work, and his inability to take love and forgiveness seriously were a big part of the reason why.

While most human rights workers today probably do not think of themselves as Marxist and may not realize the extent to which they operate in his debt or a world of his making, it is still vital to point out the ways that our work for others comes from this subjective foundation, not scientific materialism. Osborne’s final appeal is to the action of love, not violence, as the thing that will change the world. “Forgiveness is a world that does not exist in the Marxian lexicon (any more than in the capitalist). But . . . forgiveness may be the last untried “metanarrative” of human history” (p. 126).

Lisa Clark Diller usually lives with her husband Tommy in Chattanooga, Tennessee where she is a professor of history at Southern Adventist University, but she is currently on an exchange in Australia at Avondale College.