Patriotism: A Blessing or a Curse? A Biblical Perspective

Patriotism: A Blessing or a Curse? A Biblical Perspective 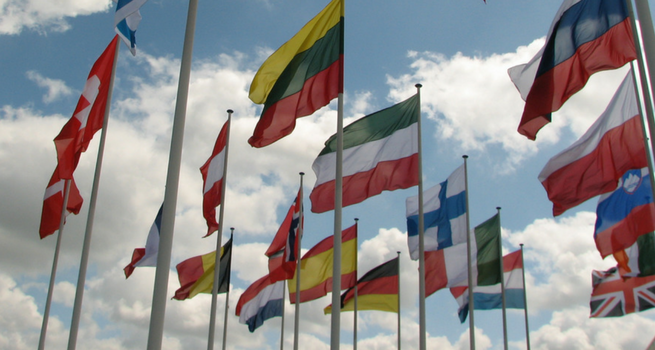 “You take a bunch of people who don’t seem any different from you and me, you add them all together you get this sort of huge raving maniac with a national border and an anthem.” –Terry Prachett

Religion and patriotism are the two human constructs responsible for most of the terrible man-made tragedies that have left indelible imprints in human history. Some good can be said of both. However, there is a sinister, darker side to both that few dare to think about, let alone talk about. The concept of patriotism as a curse rather than a blessing deserves exploration.

In its milder form, the dark side of patriotism is evidenced when a country’s national team (any sport) plays against another country’s team. Then something deeply irrational occurs. What is just a game with no particular intrinsic value becomes an event that excites and exacerbates nationalistic ardor and behavior. Singing the national anthem and waving the flag unite the fans in some sort of patriotic fervor that defies rationality. There is simply no reason why national honor should be at stake. Yet, patriotism turns the playing field into a war zone, pitting one nation against another. That human beings cannot simply enjoy a game without attributing to it patriotic dimensions and values is beyond explanation.

In many countries, physical violence is such a possibility that the fans are kept separate by chain-link fences. The security surrounding such events is complex and expensive. Why in the world should one’s country be a better one for having defeated another country’s national team?

Then, there is the even uglier side of patriotism—the side that creates prejudice, xenophobia, disregard for basic human rights, and anger against the citizens of one’s own country who do not stand for the same values. Many readers will remember, with sadness I hope, the insults piled on Mohammad Ali for refusing to enlist for the Vietnam War. A national hero for being the world heavy-weight champion one day and the next day loathed national pariah for refusing to fight people whom he had never met and who had done him no wrong.

A very disturbing political trend is presently sweeping across the globe. There is a collective inward focusing behavior that translates into the disregard for the rights of aliens as human beings created by God. Patriotism, which because of the fear of international terrorism, builds walls and refuses visas to perfectly legitimate and innocent applicants.

Reinhold Niebuhr wrote that patriotism, which is fundamentally selfish, feeds upon the people’s unselfishness. May I add that this is particularly true in times of war when patriotism requires people to make huge unselfish sacrifices to protect their collective self-interest.

When stimulated by the Hitlers of this world, patriotism can whip a nation into violence that leaves millions of bodies in its wake and causes miseries and material devastations that require decades to fix. No league of nations can contain the potential for evil of patriotism when inflamed by the demagogues of all shades who appeal to it to feed their own egotistical need for glory and fame. That is when it is not just plain insanity that drives them.

The sad thing is that Christians allow themselves to be sucked into the destructive maelstrom. Qualifying patriotism as sacred gives it an aura of morality that keeps people in awe of the concept. Yet, there is nothing moral, let alone sacred, about it. Sacredness is what is linked to God. Nothing is sacred unless made holy by God’s presence (e.g., the incident of the burning bush).

Scripture is the revelation of God by God. Nowhere does Scripture give any sacred value to the concept of country and nation as such. The temple was sacred so long as God was present there. God does not dwell in countries, which was an ancient pagan belief. He dwells in the hearts and minds of the believers. There is no such thing as a Christian nation. There are Christians who live within the boundaries of a country, but that does not make the country Christian. Peter wrote about the church being a chosen people, a royal priesthood, a holy nation, but he was not referring to any human and political construct (1 Peter 2:9).

When the religious leaders prided themselves as being the sons of Abraham, Christ’s response stunned them: “Out of stones God can raise up children for Abraham” (Matthew 3:9). Belonging to one nation or another is of no importance to God. Human beings have value only because they were created in God’s own image. Furthermore, God made every man from one man. This essentially removes all the rationale for the artificial divisions that have plagued humanity since time immemorial. It most certainly nullifies the concept of patriotism. The divine criteria is never what one does for one’s country, but how one behaves toward one’s neighbor, whether of the same nationality or any other nationality.

God gave human beings freedom. Freedom to obey or disobey him. But also, the freedom to act according to the dictates of one’s conscience when it comes to submission to the authorities. Scripture has much to say about respecting authority except when human authority legislates contrary to God’s revealed will. Though established by God, government authorities do not necessarily rule by divine principles (Romans 13:1). Peter cautioned that “one must obey God rather than man” (Acts 5:29). This will sometimes put God-fearing people, individually or corporately, at odds with what the authorities define as the patriotic thing to do.

As history moves relentlessly toward its conclusion, individual human selfishness will increasingly express itself collectively at the national level. The sense of patriotism will be exacerbated, and Christians, called to be compassionate, will have to make difficult choices because patriotism, self-centered by nature, stifles compassion and then kills it altogether.

To put it simply, it is impossible to be Christ-like and patriotic at the same time—at least not in the way society defines patriotism. But then, maybe genuine patriotism is to show that one’s country is kind, gentle, welcoming, and empathetic. Was not that God’s plan for Israel? But their human concept of patriotism closed the door to the foreigners, and they refused to be God’s conduit through which he could pour his blessings to the surrounding nations.

The sad thing is that the West, where Christianity flourished at one time, has, in the name of patriotism, turned its back to Christlikeness.