Toward a Theology of Solace: Healing post-San Antonio Wounds 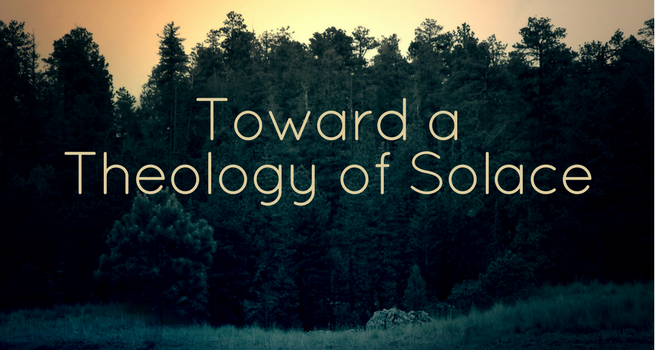 And call out to her, that her warfare has ended,

That her iniquity has been removed,

That she has received of the Lord’s hand

Double for all her sins.[i]

In this article, I intend to prompt a theological reflection on solace as a deliberate response to distressing situations in church-based organizations, especially the political struggle between the General Conference (GC) and the so-called deviant Unions.

"Solace" is a word that has beautiful connotations and denotations. According to the Cambridge dictionary, to offer solace implies giving “comfort to someone when they are feeling sad or worried.”[ii] Broadly, "solace" involves support, sympathy, empathy, help, hope, tolerance, love, patience, counseling, consoling, guidance, direction, relief, unity. The elixir of solace is essential to numerous distressing human circumstances. I think of solace as a deliberate theological tool to healing diverse issues in the Church.

Following the 2015 GC Session vote in San Antonio that denied Church divisions autonomous authority on the decision to ordain women as pastors, many sustained emotional injury, for a variety of reasons, when the vote turned out against their desired expectations or hopes. Jon Paulien, dean of the School of Religion at Loma Linda University, expressed his disappointment in the following words:

[T]he denial of the TOSC [Theology of Ordination Study Committee] conclusion and process in San Antonio was heart-breaking for many of us. I was heartbroken for the many women who felt the action showed disrespect to their perception of a call from God to do ministry. I was disappointed for those parts of the world who felt distrusted when their local judgment on the matter was rejected. I felt distrusted and disrespected when my earnest attempts to bring reason into the discussion were summarily dismissed with assertions and condemnation, rather than collegial debate.[iii]

In other words, the fact that the theological enterprise was not given proper eminence by their conclusion, while the World Church turned to popular authority from delegates (populism), accompanied by derogatory remarks, betrayed the dissenting views of some theologians within the Adventist theological enterprise.

In order to be inline with GC policy, we have been asking for help and guidance from the GC for more than a year. Sorry to say but we have not received any help…the help we needed.

Another year with threats of sanctions from the GC will damage the Church utterly. The Norwegian Union has sent a proposal to the GC that could solve the problem…the dilemma we're facing, but we have had no reply. Now we're accused of being non-compliant.[iv]

Kvinge’s remark challenges the GC to have first taken a deliberate attempt to heal the political divide, the broken heartedness, and to have ensured unity of the body; after all that is what our Lord Jesus came to offer miserable humanity (Luke 4:18, Hebrews 4:15). But when inflammatory words and phrases such as “non-compliant” and “deviant unions,” combined with threats of sanction, were the responses in the midst of the situation, the Church showed its concern for denominational authority at the expense of its wounded members. This is what has given way to prolonged emotional agony. In such situations, people begin to thirst after solace. How can theology respond to this emotional tragedy with the assurance that God is still in control?

The Bible teaches us how to open our mouths (Proverbs 15:1, Colossians 4:6). Responding to human casualties with words of assurance and hope are fundamental ethics in theology. God spoke through Isaiah with manifold words of solace to the children of Israel. And God himself, in spite of their continual disobedience, identified Himself with Israel as “My people.” God shows the way, leads the way, and we should follow suit. Therefore, a theology of solace should take into consideration a positivistic approach that offers comfort and help in any form of distress by suppressing all negativity and ill feeling which would only intensify suffering and anger.

In the on-going reconciliation process between the World Church and so-called noncompliant Unions (and probably subsequent ones in the future), I propose that the GC turn the tables and offer comfort rather than political protocol. Instead of forcing obedience, the GC must consider Gamaliel's advice:

Leave these men alone. Let them go! For if their purpose or endeavor is of human origin, it will fail. But if it is from God, you will not be able to stop them. You may even find yourselves fighting against God (Acts 5:39).

Clifford Owusu-Gyamfi, originally from Ghana, is the pastor of Adventist Fellowship Geneva, and a PhD student in the University of Geneva, Switzerland.