In Defense of Freedom 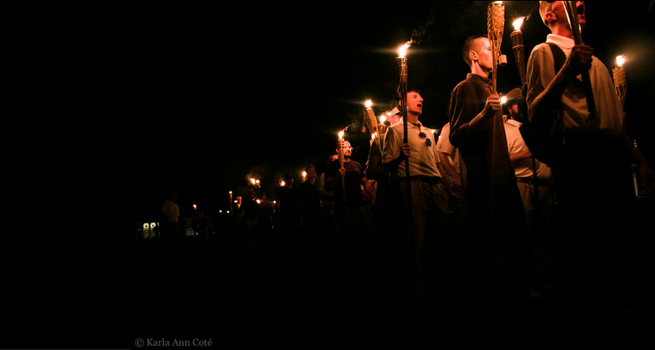 “If you've wondered what you would've done during slavery, the Holocaust, or [the] Civil Rights movement...you're doing it now. #Charlottesville” –Aditi Juneja via Twitter.

The events last weekend in Charlottesville, Virginia have sent a wake-up call to America. While in the past, the official inclination was to call attacks on American soil “isolated incidents,” we can safely say that what we are now witnessing is a trend of disgruntled behavior centered on race and religion. On Saturday, August 13, it resulted in a crazed 20-year-old neo-Nazi ramming his Challenger into a crowd at high speed, killing a woman and injuring many others.

The scene of hundreds of neo-Nazis marching by torchlight, carrying guns, and channeling their genocidal inclination into anti-Jewish chants in protest of the removal of a statue of Confederate General Robert E. Lee is the stuff of nightmares – and ghoulish history.

But the “alt-right” as they like to be called cannot be confined to some geographical location. They have apologists everywhere who join them in protesting the “historical significance” of the “Jim Crow” segregationist and Civil Rights-era statues of Confederate generals. They argue that the heroic statues of those who fought to preserve American slavery that occupy pedestals across this nation are “part of history” and that the statues are not intended to convey any kind of honor beyond remembrance of who they were.

You become who you honor, and if you put somebody “on a pedestal,” that is telling.

The reality that we are witnessing is a demonstration of just how thin American freedom is –  many very vocal people do not believe that all people are equal and are willing to defend honorary monuments to slavery. If the Civil Rights movement were taking place right now, you can be sure that a lot of people would still be silent on the issue of segregation.

Yes, there is a right to march and to protest, but don't lose sight of the fact that the "alt-right" protesters are using their freedom of speech to call for the elimination of the freedom of others.

Why is this relevant to religious liberty? Because religious freedom is dependent on the same legal structures that protect against racial discrimination. Before the Civil War, the Bill of Rights did not apply to the states – only the Federal government. That meant that the States could do whatever they wanted to people, including enslaving them. Our nation at its first founding, “four score and seven years” before the Civil War had this fatal flaw built in that allowed States to decide for themselves whether to enslave people. But this issue reached a fevered pitch that led to the Civil War and after the war, the Federal government required all former slave states to sign onto the 14th Amendment with its due process and equal protection clauses that required states to apply the Bill of Rights to their citizens.

This 14th Amendment is what keeps us free today.  The Declaration of Independence and the Constitution were the first founding, the post-Civil War Amendments were the second founding, and the Civil Rights movement in the 1960s was the third founding of America. Freedom for all is relatively new and incredibly fragile. We must work to protect it.

I had a recent discussion on social media about this and received this response from a friend with a Middle Eastern background who did not want to make a public statement:

Hey Mike, I just wanted to privately say that I appreciate your recent posts and taking up the good fight on all this Alt-right nonsense. I think there are a lot of non-black and non-latino minorities out there that feel the same way, but from experience choose to keep their head down and take it on the chin. It seems like when whites stand up and oppose the white supremacists online it leads to more dialog rather than silly comments like "f*** you sand n*****" "terrorist" "we shouldn't dilute our gene pool" blah blah blah. So from the bottom of my heart thank you.

In a time when one cannot be certain about who is at the helm of this country, it’s up to you to defend freedom and to speak up against hate. Don’t leave it for someone else.

If you've wondered what you would've done during slavery, the Holocaust, or Civil Rights movement...you're doing it now. #Charlottesville

Michael Peabody, Esq. is a regular Spectrum contributor and editor of ReligiousLiberty.TV, a website that celebrates freedom of conscience, where this article first appeared. It is reprinted here by permission.