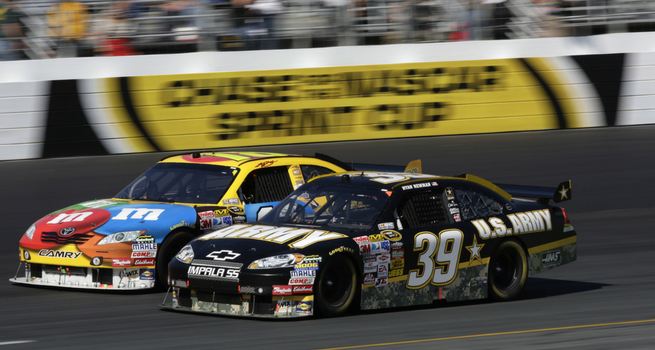 Probably the most popular driver in NASCAR history is Dale Earnhardt. He traded paint with other cars in an effort to get to the front and was known for disrupting what might otherwise be a predictable outcome. Earnhardt sometimes used a time-honored technique of "bump and run” to catapult his car to the checkered flag. His fans could not get enough of his unconventional style and sheer determination to win. On the backstretch of what would be his last race, he lost control and hit the wall. His death at the Daytona racetrack still occupies a large space in the folklore of NASCAR. In some way, perhaps, fans vicariously felt the adrenaline of winning at all costs—winning at the expense of everyone else. For that is, after all, the very essence of NASCAR.

Some of these NASCAR driver behaviors can be observed in our day-to-day lives. We hustle to our jobs, racing for the checkered flag. We are quick to assert ourselves, sometimes at the expense of others. The Bible talks about the Christian journey as a race to be won. We also learn from Scripture that there are myriad obstacles along the way. Satan stalks his prey like a roaring lion, trying every tactic to destroy us. Many of us see life as a race filled with adversaries and disrupters. To arrive at the finish line unscathed takes some cunning and strategy.

Some Christians seem to embrace a "win at any cost" mentality, sometimes acting as though we are in the last stretch and the finish line will only accept one winner. Because Christians generally accept the premise that God expects us to help one another, such a competitive spirit seems strange. In Scripture we find directives to help the poor, the widows, and the orphans. Jesus showed compassion to those who were considered outcasts or people on the fringes of society. However, something different is happening for NASCAR Christians who have adopted the “win at any cost” idea, even in political spheres.

It strikes me as odd that Christians would even have much of a political agenda. Why would churches, founded on the legacy of Jesus, have such a keen interest in how government works? What compels some Christians to be so vocal and adamant about their beliefs to the exclusion of other ideologies? For some understanding of this phenomenon, consider the mindset of Dominionism and Christian Reconstructionism among some modern Right-wing Christians.

Dominionism has many variations, but simply stated, it is the belief that Christians can and must have political, social, and religious dominance in the world. Some Dominionists believe that this process could take hundreds or thousands of years to achieve, while others believe it must take place in the here and now through decisive political action. Both streams of thought envision a world where Christians rule over the earth in a truly biblically-based theocracy. Reconstructionism is a variation on the theme but takes Dominionism to an extreme level. Based on the writings of R.J. Rushdoony (1916-2001), Reconstructionists believe that someday Christians will set up a theocracy that will reinstate all the laws found in the biblical Old Testament.

Frederick Clarkson quotes Christian Reconstructionist Gary North in an article written in 2016. "We must use the doctrine of religious liberty,” North declared in 1982, “to gain independence for Christian schools until we train up a generation of people who know that there is no religious neutrality, no neutral law, no neutral education, and no neutral civil government. Then they will get busy in constructing a Bible-based social, political and religious order which finally denies the religious liberty of the enemies of God."

One stream of thought under Dominionism asserts that God is waiting for America to come under complete Christian rule before He is willing to set up His earthly kingdom. Citing certain Bible verses (2 Chronicles 7:14, for example), some believers proclaim that God is withholding His approval and His blessings because America has fallen into apostasy. (Ibid)

These Dominionist ideas are not new to the Christian movement. Along with flamboyant displays of patriotism, evangelical Christians have a long history of decrying the sad condition to which America has fallen. Draped and securely shielded by the American flag, Christianity has adopted the idea that our nation needs to return to greatness. That is to say that this nation needs to return to God. The slogan utilized by Donald Trump, "Make America Great Again," and the Christian call to “Make America Godly Again” are two slogans that can easily meld together into one goal.

So what happened to America? Is it true that the moral fabric of this great country has been destroyed? The answer to that question, simply stated, is that citizens from every walk of life decided that America belonged to everyone, regardless of religious affiliations. Non-believers filed lawsuits in an effort to have a voice. The courts slowly recognized that people who hold beliefs and practices outside of Christianity had the right to exist and flourish. Christians still remained in the majority and had the votes to write any laws they wanted, but the United States Constitution clearly mandates that our government will not establish a state religion. This important doctrine protects people who find themselves in the minority. Non-Christian citizens still have the same rights and privileges under our constitution as those in the majority. The decisions from the courts brought rapid and widespread changes. Christians were jolted into a new reality. Non-believers were here to stay. Misguided Christians reacted decisively and adopted the idea that people who live and believe differently are enemies of America.

Seventh-day Adventists have a long history of protecting the rights of the minority against the preferences of the majority and have carved a somewhat safe space for our members in military, our church schools, and the rights of our members in the workplace. At times, our organization has sided with other minorities who are outside the mainline of American culture. The Golden Rule insists that we provide reciprocal consideration to others. This is the problem with Alt-Christianity or NASCAR Christianity. Large swaths of people have adopted the winner-take-all approach which gives little attention to how actions impact others.

"Make America Great Again" and "Make America Godly Again" are the battle cries to return our country to a time in history when conservative Christians wrote the rules and all citizens had no choice but to follow them. History teaches us that the fragile gains made by the minority against the Christian majority can quickly fade away. Religious zealots, eager to win at any cost, will gladly attach themselves to anything and anyone who promises to move their agenda forward.

When we cast votes for a particular candidate, we do not get just a slice of what we wanted. We get the whole pizza delivered to our door. Christians would be wise to remain clear-headed in deciding how closely to align with a political figure. We might think that a particular candidate is advancing the cause of God only to learn that our freedom to worship as we choose is suddenly in jeopardy. The same Christians who believe in an aggressive political agenda to get this country back to God are the very same activists who are very certain which day of the week should be observed as a Sabbath of the Lord. Muslims who prefer Friday and a few Christians who observe Saturday might very well find themselves out of the mainstream.

I join the chorus of people who are waving a warning flag in front of American Christians who have fallen into the easy trap of blaming others for all cultural problems. Modesty and a sense of proportion are missing in the political sphere. David Brooks opines, “Progress is not made by crushing some swarm of malevolent foes; it’s made by finding balance between competing truths — between freedom and security, diversity and solidarity. There’s always going to be counter-evidence and mystery. There is no final arrangement that will end conflict, just endless searching and adjustment.” Witness cannot occur in NASCAR Christianity. As citizens of Jesus’ kingdom we cannot pledge allegiance to a fallible human leader without regard to how this will affect our witness for Jesus. It is clear that some Christians actually believe "Make America Great Again" trumps everything Jesus said in the Sermon on the Mount.

It is easy to compartmentalize thoughts to the point that one will miss glaring contradictions. Thus, I can sympathize with my brothers and sisters within the Seventh-day Adventist Church who strongly support certain political figures. But, please be warned. If Jesus were to attend a political rally or listen to one of our television newscasts, He no doubt would hang his head in disappointment. Yes, if Jesus were to attend our church services, He might very well hear about how much God loves all of His children, and He might hear how much God loves people from every walk of life. Yet, as Christians, we do not have permission to separate our politics from devotion to the gentle, humble Teacher from Nazareth. We cannot serve two masters. We cannot invoke the name of Jesus while at the same time espousing hate and intolerance for those who live or believe differently than we do. Jesus died so that the whole world, through His sacrifice, might be saved. When we encounter hatred, bigotry, shaming, belittling language and actions, it is our privilege as true Christians to repudiate these ideas that contradict the teachings and character of Jesus.

Christians must look closely at our NASCAR tendencies—our predispositions to compete and win at the expense of other people. Sometimes, we make compromises to make the racetrack seem a little smoother. We might even be willing to trade some paint with those around us to get ahead. Jesus demonstrated that it is possible to lead while at the same time assuming the role of a servant. One Friday afternoon, oh so long ago, our Lord stretched His hands out on a cruel cross. He died for everyone—including those who believe and act differently than we do. When we try to win at the expense of others, we absolutely defeat the very principles of heaven. It is impossible to say that we are Christians while at the same time denying the love of God for everyone. "Win at any cost" might work for NASCAR, but it does not work very well for true Christians seeking to do the will of Christ.