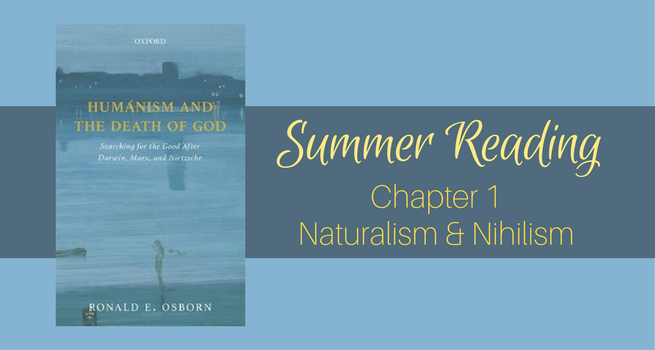 This is the first post in a seven-part series for Spectrum’s 2017 Summer Reading Group. Each post will be drawn from chapters of the book Humanism and the Death of God by Ronald E. Osborn. You can view the reading/posting schedule here.

I have not recovered from my incredulity at the female ethics professor, Harvard-trained, who refused to allow that the shooting of Malala Yousafzai in the head because of her efforts to promote literacy among girls was, as a matter of fact, immoral. I assume such reprehensible renunciation of moral discernment, ominously common at this cultural moment in the West, is the provocation for Ron Osborn’s recent book.

My otherwise decent disputant did indeed reject my assertion regarding Malala, in part, because she held that the concept of human rights was a cultural construct that can authorize no valid normative claims. Other ethicists, even if they have an antipathy toward or despair about the possibility of establishing any robust metaphysics to undergird morality, wish nevertheless to defend the reality of universal human rights. Can this be done?

Osborn articulates the issue this way. “Can we have a rationally coherent, morally compelling, and historically sustainable discourse as well as practice of humanistic values and human rights without a ‘thick’ metaphysical or religious framework such as the one provided in the Western tradition for some two millennia by Judeo-Christian sources?” And more concretely he asks, “Will we still be good to the stranger in our midst, or good in the same ways, once we have truly and utterly abandoned the idea that every person is made, in the enigmatic language of Scripture, in ‘the image of God’?” (4, emphasis his).

His answer to these questions is “no.” “In order for humanistic values to have deep coherence and motivating power, they must find their moorings in essentially religious ways of thinking” (5). The rights at issue, he says, “can only be sustained . . . both theoretically and practically within a vision of personhood such as the one found in a historically unprecedented way in Christian theological anthropology” (ibid., emphasis his). What are these rights? They are the human dignity and intrinsic human equality that attaches to each individual merely because they are human. Moreover, these rights are inalienable.

Partly because of its eloquence and partly because of the central significance to his project that it has, I quote at length his statement of the Christian theological anthropology he wishes to promote.

God incarnate—the humanly visible face of the Ultimate Reality of the universe—is a poor manual laborer from a defeated backwater of the Empire who was tortured to death by the political and religious authorities of his day on charges of sedition and heresy. What is more, the Gospel writers assert, this ‘weak’ God remains present among us in the lives of the wretched of the earth. Christ summons all who would share in his resurrection to embrace a path of selfless service and voluntary suffering for the sake of the most marginalized members of society, imitatio Christi, since how one treats ‘the least of these’ is how one treats God himself. There is thus no pathway to the divine except through a risky venture of faith, hope, and love marked by costly service to the God made visible in the lives of our fellow human beings, and in table fellowship or communion that breaks down barriers of class, education, nationality, race and gender. In the words of the Apostle Paul in the book of Galatians “There is neither Jew nor Greek, there is neither slave nor free man, there is neither male nor female; for you are all one in Christ Jesus” (6).

Having articulated his aim, Osborn offers some careful and instructive definitions of the key terms he has used and will use in developing his proposal for a religious apprehension of the good that can coherently conceive of human rights, as well as motivate respect for and defense of them. These definitions serve to differentiate his proposal from both anti-humanists and anti-religious humanists whose positions he wishes to expose as inadequate. They make clear the central contentions to come in upcoming chapters.

"Naturalism" is often used to name a view that holds that natural science is the only way to know anything because all reality, mental phenomena included, goes back to physical events. Some naturalists might argue for non-reductive ways to speak of some phenomena but any “emergent” entities will have a purely physical basis.

"Nihilism," the belief that there are no non-arbitrary normative values or goods nor any non-arbitrary restraint on sheer egoism of either indifference or rejection of any distinction between good and evil, is implied by naturalism. That is not to say that, generally speaking, individuals holding to naturalism willingly endorse nihilistic conclusions. The flattening of all of reality into “objective” facts open to instrumental or intellectual control or mastery is a kind of nihilism prevalent in the academy. In general, nihilism of whatever variety is typified by ignoring the mystery of being.

Religion involves talk of a “greater mystery” than scientific method can comprehend. A definitive religious intuition is that our deepest sense of right and wrong, good and evil, beauty, and love “corresponds with the grain of the universe” (11, emphasis his). As Noam Chomsky has observed, appeals to justice and humanistic values are based on “structures of hope and conviction.” If these structures “must be there for our ideas about goodness, value, and justice to make any sense,” then it is religion that informs them (ibid., emphasis his).

Concerning "God" Osborn writes, “When I refer to God . . . I have in mind the personal Creator God of the biblical narratives who is also the One glimpsed in partial and imperfect ways in diverse philosophical and religious traditions as the utterly transcendent and, at the same time, fully immanent ‘ground’ or ‘ocean of being’” (12).

It is somewhat puzzling that Osborn’s definition of goodness starts with a denial that there might be a problem in the relationship between God and goodness. He supports that denial with reference to the classic Christian contention that God just is goodness. What is puzzling about this is that if goodness as such (that is goodness in itself) is conceivable, it should be possible to conceive the good in non-religious terms, in purely ethical ones if you please. And the exclusive humanist would be just the sort of person to attempt that. If, however, one cannot conceive goodness except in theological terms, then it would seem some account must be offered as to God’s relationship to goodness. Put differently, if God just is goodness itself, what additional significance attaches to thinking of goodness as divine? Why not simply speak of goodness and be done with it? In other words, why not have a non-religious metaphysics of the good?

And it is at just this point in Osborn’s setting forth the parameters of his proposal that I would want to note that a successful response to the rejections of metaphysical or religious accounts of the good advanced by Darwin, Marx, and Nietzsche will be incomplete until it addresses Kant’s critique of Christian theism precisely in its efforts to affirm transcendence that is “fully immanent.” If, as Kant contended, the metaphysics of being of the tradition is logically incoherent, then one will have trouble claiming greater coherence for a Christian religious understanding of the good as against an exclusively humanistic one without addressing the logical problems of affirming immanent transcendence. Osborn’s mention of an analogy of being points to the direction he may take in addressing these issues. (It is not clear to me, at this point, that Osborn will be doing this, at some point, in this book.)

Although Osborn takes pains to defend real goodness, he does not, he says, aspire to portray a “view from nowhere.” Nevertheless, a merely parochial view, the arbitrary view of a single individual, or of a religious tradition, for example, is no more acceptable to him than some putative view from nowhere. Instead, it would seem that he, like all those who wish to attend to the mystery of being, aspires to portray the view from everywhere.

This monograph is a very welcome essay in defense of the intuition that wherever we are, precisely the view from everywhere, requires that we condemn the attempted murder of Malala Yousafzai and that we defend and celebrate the right of girls to learn to read just because the good has the face of a poor Palestinian Jew who is present to us in them.

Daryll Ward attended Andrews University, Tübingen University, and the University of Chicago (where he earned his PhD) and spent many years working in the field of addiction treatment, business ethics, and pastoring. He currently serves as Professor of Theology and Ethics at Kettering College.