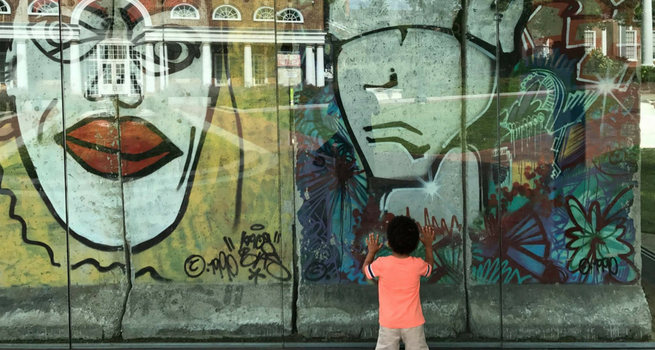 A lot of you have been calling, texting, and checking in to see if Andrea, Max, and I are ok, and in all honesty I’m not ok.

I’m not ok because white supremacists, white nationalists, Neo-Nazis, KKK members, and other domestic terrorist groups thought they could come into my town and cause my friends to fear.

I’m not ok because some folks don’t denounce these groups unambiguously.

I’m not ok that a young woman and two police officers died as a result of this alt-right, fragile-ego foolishness.

I’m not ok because on Friday night after attending an interfaith, multi-ethnic, intergenerational prayer vigil in which God’s love was palpable, in preparation for the day ahead, we were told that 300 men with torches were outside the church and it was unsafe for us to leave the building.

I’m not ok because some folks, sipping their Starbucks, following the news on Twitter, posting comments in perfect safety from their phones, have the audacity to question what we, who are on the ground, are doing in response to what is happening, and asking why aren’t we posting pics of what great activists we are.

I’m not ok because some folks aren’t bothered by what is going on.

I’m not ok because I had to call our church members and let them know that some parts of Charlottesville were going to be dangerous.

I’m not ok because I had to present them with the horrible option of staying home if they felt unsafe with bringing their children out in such conditions, or gathering to pray for God’s protection on our community.

I’m not ok with a whole lot more than this, but even though I’m not ok, I’m going to be alright.

I’m going to be alright because I have so many friends and family who have been checking up on me.

I’m going to be alright because Scripture foretells that the days of the hate groups that came into town this weekend are numbered.

I’m going to be alright because clergy in Charlottesville have been meeting for months planning ways to combat the hate we were anticipating yesterday with compassion.

I’m going to be alright because even though there are folks who think they are courageously posting comments criticizing the very ones who were in the path of danger, they need our compassion too—at least they are bothered by what happened.

I’m going to be alright because our church will continue to gather, sing, pray, read, and respond.

I’m going to be alright because one day we are going to beat our swords into plowshares, and our spears into pruning hooks, we will not lift up sword against one another, neither shall we learn of war any more.

I’m going to be alright because one day soon, we will live in freedom together, in the garden of the Lord.

The picture above is of my son, Max, playing in front of a piece of the Berlin Wall that is on display at the University of Virginia. It is located just a few hundred yards from where the 300 white supremacist torch bearers were chanting, “We will not be replaced,” on Friday night. The fact that this wall is used as a museum piece, and the fact that my two year old was laughing, dancing, and playing tag with his dad in front of it, should remind supremacists and haters from around the world, “You already have been replaced.” Love wins!