Exchanges Down Under Part 4: Being "American" 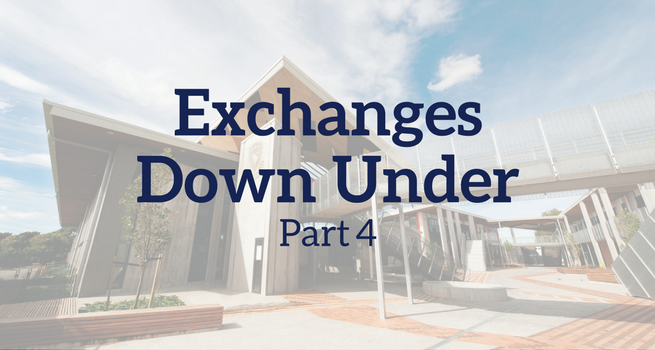 Exchanges Down Under Part 4:  Being “American”[*]

Meditations on what I’m being taught by spending a year away from my family and community on a professorial exchange between Avondale College and Southern Adventist University.

“So, you’re American — what do you think about your current president?” I get asked this question somewhat regularly. It is asked very politely, sometimes tentatively. People are trying to find out something about me, about the “feel” of things back in the States, while not being offensive or showing their own hand too soon. I’m aware that how I answer this might not only shape how people think about me and my values/ideals, but it also impacts how they think I “fit” into my country’s national and political culture, what kind of American I am. I’m not answering for all Americans, but I do have the ability to decide how much I want to identify with the politically active majority in my nation. I can reconfirm stereotypes, or I can try to explain nuances. I can hide my own strong ideas in the attempt to promote a more accurate and complex picture of U.S. politics, or I can engage in a mutually re-affirming tirade about the leadership in our country. Like all minorities who have to represent their “people” for the majority, there’s no graceful way to navigate these lines.

And this is just one tiny element in what it means to be “American” while abroad. Most of us who travel a lot are familiar with the “ugly American” type — someone who bombastically comments on their own obviously superior ways of doing and thinking, is insensitive to cultural nuances where they are, and demands services and commodities that are out of keeping with local norms. However, I think these types of U.S. citizens are rarer than the kind of traveler who really enjoys the new and strange and wants to fit in where they are, and most of the Australians I’m meeting seem to avoid putting all U.S. visitors in the “ugly American” basket. But there is no way to escape occasionally being inadvertently rude or making the same mistakes that others have made before me and, therefore, confirming some of the less pleasant characterizations about my national culture.

For instance, I’m a loud, confident, and fast talker—very American though, of course, I’m also a bit of an outlier in the States in my speaking traits. We have plenty of shy and self-effacing people in the U.S., but we privilege extraversion in a way that not all cultures do. And my observation is that in Australia, the concern not to get “above” oneself (called the “tall poppy syndrome” here) is much more prevalent than in the States. At Southern Adventist University where I have worked for 15 years, we are constantly training in ways to “sell” or promote our school and the majors we represent. Conversely, my colleagues here at Avondale have plenty to brag about, but they are more reserved and moderated in their recruiting and public relations. I’ve probably come close to sabotaging my attempts at promoting Avondale by going on and on about its virtues to potential students because that sort of self-aggrandizement is abrasive in this culture. And for some reason messing up as an American causes me to cringe more than I feel that it would if I were coming from a less culturally all-pervasive country.

Because the U. S. looms large wherever I go — not only via entertainment, but in research/academic data, TED talks, church media helps, sermon illustrations — so many of the supports for knowledge and authority come from the U.S., I haven’t had to stretch myself very much to adapt to Australian norms/illustrations because so much, even in books by Australian authors, is rooted in examples, events, and data from the U.S. I’ve stopped being surprised at how much knowledge about my country can be assumed by the people I meet here. But it is disconcerting how much another place, so far from my own, must adapt to and be influenced by the behemoth in the world that is the United States.

I sometimes find myself wanting to resist the assumption of knowledge on the part of my friends, to explain how inaccurate is the stereotypical binary of Hollywood liberal vs. gun-toting racist, or to describe the richness of the varied spiritual/religious practices that my devout country practices. But all too often their picture of my home is valid, and I have to submit to the fact that I don’t represent a strange place and that there are consequences to the cultural imperialism my country engages in, not just politically and economically, but also within the church. The first six weeks I was in Australia, I heard U.S. accents preaching in church every single Sabbath. I felt somehow that my Australian experience was being diluted — until I realized that part (a very tiny part of course) of being Australian is dealing with the ever-present U.S.A.

Most of us know how slippery identity is. Here in Australia, I’m “the American” more often than I’m “the historian” or “the Christian” or even “the friend.” Sometimes, (as racial, ethnic, and other minorities definitely know) you don’t get to choose what your label is. Other people tell you that, for instance, you’re a feminist, even if that’s not how you want to be known. While I’m here, I’m one small representative of a larger-than-life power and the privilege and challenge that comes with that. I can’t deny it or avoid it.

So, while I try to be a good friend, church member, teacher, and colleague, I do it embodied as the American. Many of my choices or ideas will be viewed within the framework of representing my national upbringing and paradigm. And it’s true that I’m happy to be a U.S. citizen; and I accept the fact that being raised a white, middle-class Adventist woman in the Appalachian Mountains has very much impacted the way I think. But I’m also deeply thankful for all those here in Australia who allow me to practice my other roles while mostly not leaving me trapped in the box of my national identity.

And maybe, when I return home, I’ll do so with less of a tendency to want to categorize people with a label that only describes one element of them — even if it is the most obvious part and the one that I think expresses the largest set of traits about them. And maybe I’ll do less asking people to speak on behalf of all “their people.”

In the meantime, I’m still trying to figure out what to say about U.S. politics to the people who live on the other side of the planet and didn’t get to vote in the election, but who live in a world that’s deeply shaped by what my country chooses to do.

[*]I’m using “American” in quotes because that designation, while often used to refer to people from the United States, is also claimed by many other travelers/visitors from North and South America. This is a more sensitive matter to our neighbors in the Western Hemisphere, but since most of my friends here in Australia think of U.S. citizens as “American,” I’m going with it for now (and usually try to forego pedantically hectoring my Aussie interlocutors on the challenges with that term).

Lisa Clark Diller is Professor of Early Modern History at Southern Adventist University. She is currently enrolled in a year-long faculty exchange program at Avondale College of Higher Education. Learn more about the exchange here.