A very special engagement photo has gone viral, showcasing the head-over-heels love of a 70-year-old retired schoolteacher and 67-year-old retired florist—an Adventist couple who attend the First Seventh-day Adventist Church in Huntsville, Alabama. Their story, illustrated by a photo of them holding a sign saying “She Said Yes!” was featured on ABC, CBS, CNN, Good Morning America and created major momentum on Instagram and social media platforms.

Cleveland Thaddeus Wilson, or Murphy, as he has always been called, is a retired schoolteacher, who spends his time using his ministry of music wherever he can. In addition to leading his own church choir, he often leads workshops for other churches to help build their choir or music department. Murphy was happily married for 41 years until his wife Antoinette died in 2013. After losing Antoinette, Murphy found it hard to continue his old life and even stopped going to church for a little while. When he returned, he chose a new seat: up in the church balcony. And that’s where Lucinda was sitting, too.

Lucinda is a retired florist from Boston who moved to Huntsville for a fresh start in 2013. She spends her time cooking and baking for friends, family members, and clients. She is especially known for her massive cakes, banana pudding, and peach cobbler. She loves helping people and spends a lot of time offering help to some of her “older friends.” She is liked by everyone who knows her. When she met Murphy, she had been divorced and single for 30 years. For more than three years, the two both sat in the church balcony every Sabbath, just a few rows apart, without ever having a conversation.

Then one day they started talking. . . and basically never stopped.

With the help of Danita Jones, Murphy’s daughter, Spectrum asked the happy couple to tell us about their love story, their wedding plans, and their church family.

Unfortunately, reading this written interview, readers miss out on all the giggling, joking. and laughing Lucinda and Murphy did while answering the questions. They spent a lot of time making jokes before actually answering each question. Even in a short interview over the phone, one can hear how much they genuinely care for and love one another. They finish each other’s sentences. Their collective wisdom about relationships is hard to discount.

Question: Your engagement photo went viral! How many views has the picture had now?

Murphy: Don’t know. Is there any way of measuring that?

Lucinda: We don’t know.  Is there someplace you can go to find that out?

Danita: I’m not sure. At a certain point, we just gave up trying to keep track. After one particular post on Instagram turned up about 150,000 likes in less than 2 hours, we realized we were in over our heads in trying to count.

Why do you think your engagement photos have resonated with so many people?

Murphy: That’s definitely one of the reasons. Whose idea was it to have a photo shoot?

Murphy: My two daughters. They hired the photographer. We didn’t come up with that. They were like: “You need to take engagement pictures.” We just did what we were told. We just went out there and acted like we always do. We had a good time.

Lucinda: I thought it was great. I knew it would be fun.

Danita: Well, we suggested it because that’s what everyone is doing now: engagement photo sessions. My sister and I figured their age shouldn’t dictate whether they get to do one too.

Murphy: It was pretty crowded at the park that day because it was “Music in the Park.” And the photographer, Gianna Snell, (who is a dear friend of my daughters)  just encouraged us to have fun. And you don’t have to convince us to do that! Gianna came up with the sign idea. She actually brought the chalk and black paper with her, and she wrote it right there in the park. And it’s funny, she told me to hold it up, and I did. As soon as I did, all these people in the park started cheering and applauding and recording us with their phones. It was interesting to see how many strangers were so happy for us.

Lucinda: It was a great moment.

How and when did the proposal happen?

Lucinda: I think it was a Friday.

Murphy: I told her how I felt about her. Before that night, I went to the Christian bookstore and bought a leather-bound copy of Sarah Young’s Jesus Always. I had the bookstore engrave “Lucinda M. Wilson” on the cover instead of “Lucinda Myers.” I don’t think she noticed it right away.

Murphy: I wrote on the inside about how she was giving me my balance back. I’m involved in a lot of things, but I felt as though my balance was off.  Anyway, I wrote something to the effect of “may our home have Jesus Always.” And I proposed.

Lucinda: It was very nice.

How has your church family reacted to your engagement?

Lucinda: All of the above!  Blindsided.

Murphy: I had made a big deal for four years about not getting remarried. So everyone was under the impression that I wasn’t even interested in anyone at church. And honestly, I wasn’t. So yeah, Lucinda, I like that word: “blindsided.”

Danita: That might have been due to the fact that you all kept it under wraps for a while.

Murphy: On occasion, we would coincidentally approach the same group of people at the same time. But they never knew we were dating.

Danita: The church is overwhelmingly excited—from some of the youngest members all the way up to the senior pastor. It’s difficult not to be excited when you see them together.

Murphy, do you still direct the choir at your church?

Murphy: Yes. I’ve been directing that choir (The Inspirational Choir) for 42 years. We sing every fourth Sabbath at our church.

Are you both involved at the church?

Lucinda: I’m involved in Hospitality. I was very involved even before I became a member.

Murphy: I like the diversity. Worship style. I just love the services there.

Lucinda: I like the people. I love The Inspirational Choir! (And I’m not just saying that because I love you, Murphy!) Has your story of finding love at the ages of 67 and 70 inspired any of your single friends?

Lucinda: Oh, yes.  We give hope that one day they too will find love.

Murphy: And it’s not just elderly folk saying it. It’s younger folk, too. A young man pulled up next to me a few weeks ago to congratulate me, and he said, “I feel like there’s hope for someone like me.”

Lucinda: I’ve been hearing it more from older people.

Do you believe that God led you together? If so, what makes you think that?

Murphy: Absolutely. We would greet each other, but I usually didn’t say much to her. Looking back, there were too many things that happened so easily to seem like it was just a coincidence. It seemed like we’ve known each other for years. We were comfortable with each other right away. And then it’s the little things like my sister is best friends with Lucinda’s best friend.

Lucinda: And then there was the Raymond thing that put the icing on the cake.

Lucinda: In December, my friend Raymond called me from Boston. He said, “Lucinda, I just had a dream about you. I had a dream that you were going to meet somebody and fall in love, and you were going to marry him. And he was going to be a nice guy. And it’s going to be really quick.”  And I was like “Yeah right, Raymond.”
Well, Raymond and I didn’t talk for a while. But, of course, I fell in love with Murphy, and he asked me to marry him.  So I called Raymond; I told him he was right. So, Raymond asked for a picture, and I sent it to him. Raymond called me and said, “That looks like Murphy Wilson! He’s such a nice guy!”

Murphy: So, she’s telling me about this guy and I’m like “Who is this guy?”

Lucinda: And Raymond told me to ask Murphy, “Who was your brother’s best friend growing up?”

Lucinda: I had no idea that they grew up together. He was familiar with the whole family. It’s things like this that lets me know . . . God is in this.

Your wedding is planned for July 29. Will your choir sing? I'm sure you will have amazing music!

Murphy: The choir won’t sing. But I know the music will be great.

Danita: Much of their wedding is being planned by my sister, Gina Woods, and me.

Some of the things we’ve planned for them are a surprise. I can definitely confirm that the music is going to be amazing.

What advice would you have for anyone who has given up on finding love?

Murphy: I’m gonna let my future wife answer that because I love her answer.

Murphy: Because that’s what you did. But I also like the part where she says she didn’t need anybody to make her happy. So when I came along, I was icing on the cake.

Lucinda: I did say that, huh? I didn’t need anybody to make me happy. I like to do so many things. I didn’t have time to sit around and mope about not having anybody. I felt that if the Lord was going to send somebody, he was going to send them. And He does things in his time. 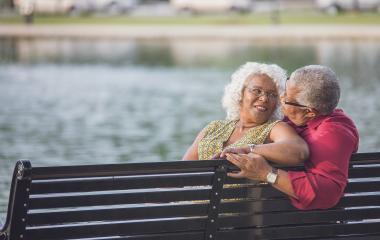