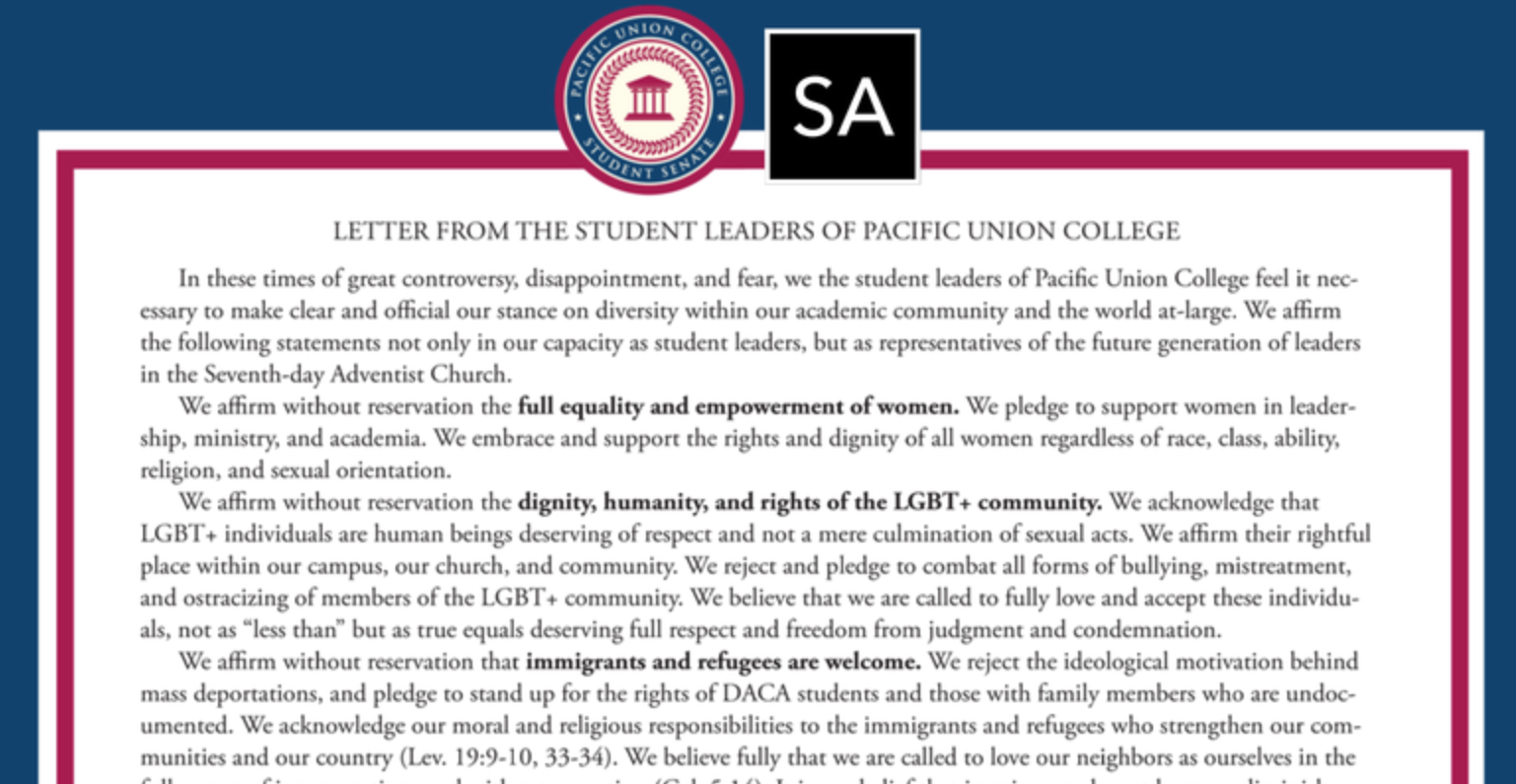 With a powerfully-worded statement on diversity, the Pacific Union College Student Senate has cast a vision for the future of the Seventh-day Adventist Church that would make the denomination a much more inclusive and welcoming place. Published on May 24, the Diversity Statement provides the young leaders' stances on five topics: women's equality and empowerment; dignity, humanity and rights of the LGBT+ community; welcoming immigrants; affirming Black lives; and inter- and intrafaith diversity.

The twenty student leaders who signed the statement vowed to hold the "college accountable and ensure that Pacific Union College remains respectful, truly welcoming, and supportive of the full spectrum of human diversity."

The statement came just over a week after Pacific Union College announced on May 11 that Robert Cushman would succeed Eric Anderson as college president. Anderson served as president from December 2016 through Cushman's appointment, following the end of Heather Knight's tumultuous presidency. Knight often clashed with both students and faculty members. She announced the end of her presidency amid declining enrollment and budget shortfalls and following protracted upheaval in the college's psychology and social work department.

Placed within the broader context of the Seventh-day Adventist denomination, the student leaders' statement both agrees with and departs from statements made by denominational leaders.

On women's equality and empowerment, the Student Senate wrote,

We affirm without reservation the full equality and empowerment of women. We pledge to support women in leadership, ministry and academia. We embrace and support the rights and dignity of all women, regardless of race, class, ability, religion, and sexual orientation.

These sentiments align with statements made by North American Division President Daniel Jackson, who has affirmed the division's aim to "empower and establish our women in pastoral ministry." The student statement goes further than anything NAD leaders have said by affirming all women, particularly without regard to religion and sexual orientation. And, of course, the General Conference of Seventh-day Adventists still discriminates against women by insisting on granting separate, lesser credentials to its many women pastors.

Concerning orientation and gender, the student leaders wrote in their statement,

We affirm without reservation the dignity, humanity, and rights of the LGBT+ community. We acknowledge that LGBT+ individuals are human beings deserving of respect and not a mere culmination of sexual acts. We affirm their rightful place within our campus, our church, and community. We reject and pledge to combat all forms of bullying, mistreatement and ostracizing of members of the LGBT+ community. We believe that we are called to fully love and accept these individuals not as "less than but as true equals deserving full respect and freedom from judgment and condemnation."

This statement goes beyond statements made by any denominational leaders in terms of its postures of inclusivity and acceptance. In November, 2015, the North American Division adopted a statement on human sexuality that sought to balance love and compassion and the leaders' understanding of biblical principles. The statement affirmed prior statements issued by the General Conference of Seventh-day Adventists that declare sexual relationships to be excluded to monogamous, heterosexual marriage relationships. The statement indicated, and Dan Jackson stated more explicitly in a dialogue with collegiate Adventists, that church membership is not available to persons in same-gender relationships. Denominational employment excludes individuals in non-sanctioned sexual relationships.

We affirm without reservation that immigrants and refugees are welcome. We reject the ideological motivation behind mass deportations, and pledge to stand up for the rights of DACA students and those with family members who are undocumented. We acknowledge our moral and religious responsibilities to the immigrants and refugees who strengthen our communities and our country.

Dan Jackson has expressed similar sentiments regarding refugees. In an op-ed for the Huffington Post, Jackson wrote,

To close the door to refugees cannot be an option. To 'welcome' them by marking them with shame and suspicion is unacceptable. To incite fear based on prejudice is irresponsible. As followers of Jesus Christ, we are compelled to welcome ALL who are seeking refuge."

Again, student leaders at PUC have expressed similarities to North American Division leadership concerning the value of Black individuals in America, who have suffered from intractible, structural racism. The Student Senate wrote in part,

We affirm without reservation that black lives matter. We reject and pledge to combat racism in all forms, and to yield to the voices of racial and ethnic minority students on ways to improve our campus and ourselves in regards to acting and speaking in a Christ-like manner. We acknowledge both the history of racism within the Seventh-day Adventist Church as well as the improvements which have been made throughout our history.

Adventists, including Lake Union Conference President Don Livesay, Andrews University President Andrea Luxton, and Union College students led by Chris Blake, have issued official apologies for racism within the Adventist Church. Dan Jackson has spoken out on the extrajudicial killings of Michael Brown and Eric Garner in the wake of the acquittals of the white officers who killed them.

The student statement surpassed those acts in its explicit language affirming that Black lives matter (a politically divisive but crucially important phrase), intentionally combatting racism, and defering to racial and ethnic minorities for guidance on improving racial conflict.

We affirm without reservation that interfaith and intrafaith diversity strengthen us as a religious community.

While General Conference President Ted Wilson has often expressed suspicion toward religious movements outside the Adventist faith, calling on Adventists to look within rather than without, the Adventist Church has participated in interfaith meetings. Ganoune Diop, director of the General Conference Department of Public Affairs and Religious Liberty, has written about his involvement in interfaith dialogue and ecumenical organizations.

Still, the sentiment expressed by the PUC student leaders has gone further, framing religious diversity as an asset, not an obstacle to the religious community.

If the statements by the PUC Student Senate can be seen as an expression of the values of the next generation of Adventist leaders, the future of the Adventist Church will be more inclusive and more affirming than ever before. The full Diversity Statement can be read here.