Are We Getting in the Way of God's Salvation Story? 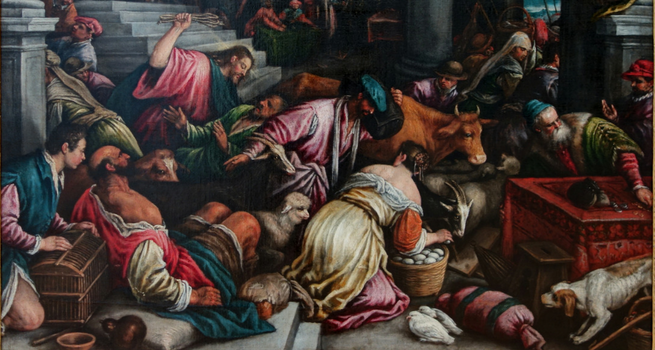 Have you ever been so angry that you did something dumb? I got so angry once that I punched the steering wheel on my car and broke the horn. From that day on the horn would honk on its own whenever it wanted to. It didn't matter if I was at a stop light, in a parking lot, or driving down the university campus on a calm Sunday morning. The car would honk and honk and honk until I got so fed up I pulled the fuse and was left utterly hornless. The car died soon after, so no, I never got it fixed.

As I think about this moment of ridiculous anger, I am reminded of Jesus in Matthew’s biography, chapter 21. Here Matthew recounts the time that Jesus went into the Jewish temple and the following took place:

Jesus came to the temple. He drove out all those who were buying and selling. He upended the money-changers’ tables and the dove-sellers’ benches (12).

We don't often think of Jesus as an angry guy—and with good reason. It is hard to imagine him with a whip, flipping tables, and chasing people around. And yet here he is. Jesus is angry. To be more precise he is furious. Some may even say Jesus has lost his cool. There is a fire in his stomach, a rage that boiled over and is now spilling out onto the onlookers. Gone is that gentle, pensive face. A frown adorns his brow, his breath is heavy, his heart is thumping, his thoughts are racing. Instinct takes over, and Jesus, our gentle Jesus, appears to have lost control.

What are we to make of this? Is Jesus bipolar? Is he perhaps mildly schizophrenic? Did his biographers get confused and introduce a contradiction into the story? Or was Jesus a really good actor—able to put on a facade of gentleness and self-control, only to show his true colors on this random day? Or maybe, just maybe, there is nothing wrong with Jesus’ mental health, his biographers were not inconsistent, and Jesus himself lived authentically. If this is the case then the problem shifts to me. Maybe I am the one who has misunderstood Jesus. And by misunderstanding him, I have presented a cheesy and unrealistic picture of a complex and emotional being. Maybe the problem is I have only accepted the parts of the Jesus-story that I am comfortable with and conveniently left the other parts out. But whatever the case, I cannot get away from the conclusion: Jesus got angry.

Now that I have come to terms with that reality, I am left with another question. Why was he so angry? Was Jesus short-tempered like me? Was his ego so offended that he reacted in a fit of anger that puts my broken car horn episode to shame? I have already concluded that he did not lose control as I did. So the answer must lie elsewhere. If Jesus’ anger was not fueled by his ego, then what was it fueled by?

The answer is found in the narrative of the temple. In his book, It's Not What You Think: Why Christianity Is about More than Going to Heaven When You Die, Jefferson Bethke points out that in the Old Testament the temple was considered the place where heaven and earth met. In other words, Bethke explains, it was the place where the human dimension and the heavenly dimension collided. If we could imagine two circles with one representing the human realm and another the heavenly, and then we overlapped those circles (below) the point of overlap, says Bethke, is the temple. 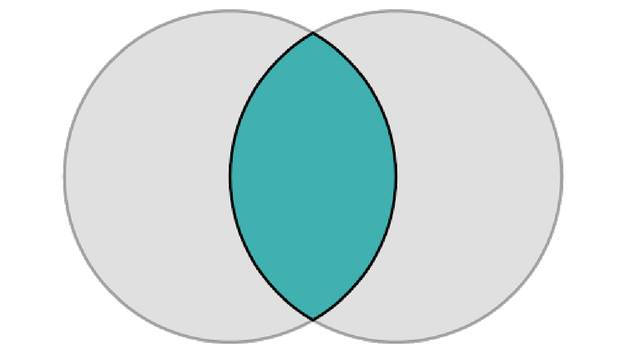 But what was the point of this overlap? What was the point of this collision? God himself answers that question when he said, "Have the people of Israel build me a holy sanctuary so I can live among them" (Exodus 25:8). The temple in Israel was not just a place of worship; it was a theater of sorts. All of its services and rituals were like scenes in a movie. It told a story. That story was simple: God wants to live with people. He wants to be close to us.

And then Jesus, the eternal God in human flesh, shows up. He who spoke the words, "Have the people of Israel build me a holy sanctuary so I can live among them" is now there, in person. And when he walks into the temple, when he enters the place where heaven and earth collided and where his story, and his glory, and his love were meant to be experienced and celebrated, this is what he found:

When it was almost time for the Jewish Passover, Jesus went up to Jerusalem. In the temple courts he found people selling cattle, sheep and doves, and others sitting at tables exchanging money (John 2:13-14).

So Matthew tells us that Jesus "drove out all those who were buying and selling. He upended the money-changers’ tables and the dove-sellers’ benches." But then something amazing happens. Something that single handedly makes sense of all of this. Matthew adds:

The blind and the lame came to him at the temple, and he healed them (14).

So Jesus cleanses the temple, but no sooner had he done so than blind people and paralyzed people, show up at the same temple. But here is the question Matthew dangles before us. Why weren't these people already there? The answer is obvious. They were being excluded and kept away by the money makers. In other words, God was trying to tell the world about himself, his love, his plan, his grace. And his own people were getting in the way.

The Jewish temple no longer exists. But Jefferson Bethke brings an interesting conclusion out of all this. He says that according to the New Testament, we are now the temple of the Holy Spirit. Us. Believers. Individually and collectively, we are now the temple. In other words, we are the place where heaven and earth collide. You are a walking temple. You are a living and breathing temple, and in you and in me the human realm and the heavenly realm meet. And in the same way that God wanted to communicate his love to the world through a physical building in the OT, he continues to do so now through us, individually and collectively, via the indwelling of his Holy Spirit. We are the place where people can see the beauty of God.

And yet the story of Jesus cleansing the temple brings to mind a sobering question: If we are the temple, if we are as believers the place where heaven and earth meet and the lives through which people can come into contact with God’s story of love, then we must ask ourselves—what things are there in our lives and in our church that keep people from seeing the love of God? In what ways are you, and I, like the money makers, getting in God's way?

Today, I would like to invite you to consider Jesus’ moment of rage as a call to introspection: How are you getting in the way? I want to invite you to think about the ways in which you are contributing, whether largely or microscopically, to getting in the way of others seeing the story of the love of God that they should see in you, in me, and in us. But here is the beautiful thing. Once you discover it, you do not have to be afraid. Because according to Matthew, Jesus is not only a cleanser, he is also a healer. Let him cleanse you of the stuff that gets in the way, and let him heal you. Come to him poor, blind, and naked. Come to him paralyzed with guilt and shame. Come to him as you are with all your broken mess. With your pride. With your selfishness. With your divisiveness. Come to him with your lack of faith and with your hidden sins and struggles. Let him cleanse you, let him heal you, and then let him fill you so that others may find in you a place where heaven and earth collide.

Originally from New Jersey, Marcos now lives in Australia with his wife and children. Marcos' greatest passion is to help others realize that Christianity is a passionate and committed relationship with God, not a religion. He also runs his own blog at www.pomopastor.com where this article originally appeared. It is reprinted here with permission.