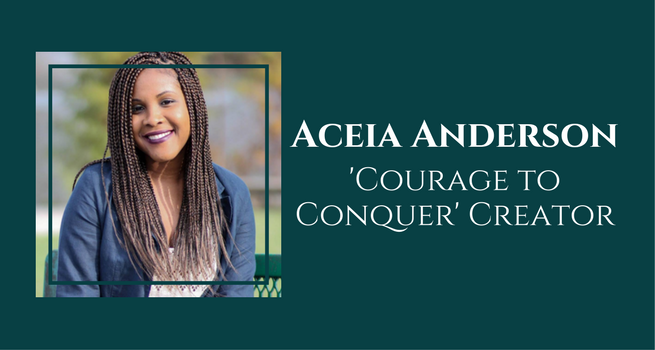 Aceia Anderson has created a ten-episode web series about a teen who struggles with bullying, depression, and anxiety. This creative writing major from Florida wanted to show young people they are not alone.

Question: You are creating a web series called “Courage to Conquer.” What is the series about?

Answer: "Courage to Conquer" is a faith-based web series about struggle and survival. It centers on a young, sheltered 17-year-old girl named Kyla Petrie who attends a Christian private school in North Carolina. Upon her mom getting a new job, Kyla and her family must move to Orlando, Florida and, because of price differences, must attend a public school for the first time. In this new environment, she is introduced to a world of temptation, manipulation, bullying, and thoughts of self-doubt. Will she cling to her morals and values and her Christian beliefs to get through her senior year, or will she allow her new environment to change her and everything she believes in?

How do you think that your series will help young people struggling with depression, bullying, and more? How is your message different than what people are hearing already?

Well, I originally came up with the idea to do this web series because there isn’t anything out in the media that focuses solely on these issues while also acknowledging the Christian element. There are so many people suffering with depression and anxiety, but they aren’t saying anything because mental health issues are overlooked and not taken seriously in today’s society.

I believe that the media, in particular TV series and movies, is the main source of entertainment that young people enjoy. So, watching a series about issues they themselves are going through and seeing characters onscreen work through these tough issues and get past situations maybe they are struggling to get past is a powerful way to reach and connect with our youth. Everyone just wants to know that they aren’t struggling alone, and my series represents a plethora of modern-day issues that they can relate to.

My message differs from what’s out there right now by simply attaching Christ to it. Many people want a closer relationship with God and want to believe that he can forgive them for all their wrongdoings. But sometimes personal guilt can convince us that he hasn’t or won’t forgive us, and my series touches on that issue, among others.

The series has 10 episodes. How many of them have been filmed so far? How many actors are in them? Do you play the main character the series follows? Are you directing the episodes?

I have written ten episodes, and we actually just finished filming all 10 at the beginning of May.

A team of over 30 people worked with us on this project, but in terms of main characters, there were only nine.

I did play the main character, but it wasn’t originally planned that way. I had someone else in mind so that I could focus on directing. Unfortunately, she couldn’t do it, so I took on that role.

And the start, we had an excellent director with us, but due to some medical issues, she had to quit midway through, and I had to finish directing everything.

How long have you been working on the series? When will it be finished? Where did the idea come from?

I started writing it in August 2016 and finished all ten episodes in January 2017. In terms of filming, it took us a good five months to get everything shot. We are currently in the process of editing and plan for it to be finished by the end of July.

I thought of writing the web series for two reasons. One was because I attended a Seventh-day Adventist film convention and participated in a pitch contest in front of a panel of industry professionals. I pitched my idea to do this series, and I won the contest. That was how I was able to get started, but I always wanted to tell this story.

The second reason was inspired by my own life. I suffer with depression and anxiety, and I am also a Christian who struggles with temptation. I have to own up to that so that others going through the same thing will have the confidence to do the same. I wanted to tell this story because there are too many people hiding out and afraid to tell their own stories. I suffered a lot of emotional trauma growing up and developed image issues and low self-confidence. Most of the elements in the series are indeed non-fictional and fashioned after my own life . Some, of course, are fictional as well.

Can you tell us more about the 2016 Florida SONscreen Ignite Pitch Contest that you won?

Yes, that was definitely a nervous and exciting experience for me! The event took place in Orlando, Florida, last August. It was a convention that hosted a bunch of aspiring actors, directors, writers, videographers, and editors. It was a two-day weekend event and a great chance to meet new people and make connections.

Who is the team you recruited to help with the project? How big is the team?

I recruited my videographer and editor, Vann Patacxil, first. He helped build sets for my stage plays in the past, and he also played the piano sometimes for my church.

I then found my director, E. Marie Sissle. I was introduced to her last year when we did my stage play “Choices” for the community, and she liked my work then. We had a few conversations on the phone and then made the partnership official.

My production assistant, Sarah Burton, was third to be recruited. I know her from church and was automatically interested in having her join the team because of her awesome organizational skills and obvious love for the Lord.

The executive producer, my mother, Thesla Berne-Anderson, wasn’t hard to get on board (as you can imagine!). She handled all the promotional tools and financials.

I also had a lot of different people helping do audio and be extras.

My target audience is actually not Adventist. That’s not to say that Adventists can’t watch or that there aren’t elements of the series they can connect to, but my main audience is young people who are struggling with bullying and mental health issues, no matter their religious affiliation.

I believe that there are steps to take in introducing people to God and his love, and I hope my web series will do that. My hope is for anyone watching is to develop a relationship with God, to grow the confidence they need to accept whatever issues they have, and to believe that there is a better future for them.

I plan to put the series on YouTube and to release one episode a week, like regular TV shows. We have started a Gofund me page and are still accepting donations. We still have a lot of work to do in order to release the finished product, so any additional funds will be greatly appreciated.

I had a look, and you have nearly raised your $8,000 goal on your Gofundme page. Who are your contributors?

The funding has come from family, friends, church members, and people within the community. Surprisingly enough, $8,000 wasn’t our original goal. It was $25,000, but as the days went by, we realized that wasn’t as realistic, and so we took it down. We have almost reached our new goal of $8,000, but as I mentioned before, any additional funding will be greatly appreciated!

You are studying creative writing at Florida State University. Is this your final year? Are you able to count any of the work you are doing for the web series toward your academic degree?

I took two semesters off to focus on bettering myself emotionally and spiritually, but yes this is my final year (thank God!). I plan to graduate in the spring of 2018. Unfortunately, this is an outside project and will not count toward my academic degree.

Why did you choose to study creative writing? What do you hope to follow as a career?

When I was 14, our drama leader and writer moved away, and there was a need for someone to step up and take his place. I was asked to write my first play. Obviously I didn’t have any prior experience and didn’t think I could do it. But I ended up giving it a try, and I was able to write a full hour stage play in one hour. From that moment I realized that writing was my God-given purpose, and I have been writing creative projects ever since. As my future career, I hope to become a professional screenwriter, playwright, and novelist.

Can you tell us a little bit about your family and where you grew up? Did you grow up in the Adventist church?

I was raised here in Tallahassee, Florida. I have an older sister, Brittany, who currently lives in Orlando and is an elementary school teacher. I also have an older half-brother who resides in Havana, Florida. Both of my parents are wonderful, educated people who raised me in the faith. But I didn’t grow up Adventist. We were originally Baptists and went to Sunday church up until I was about seven or eight. I was baptized into the Adventist church when I was eight years old and have been an Adventist ever since.

What advice would you have for church leaders as they consider ways of reaching young people and helping them with the problems and issues they struggle with?

My advice for church leaders, and anyone who wants to make a difference and reach young people, is to always be honest, understanding, and real. There is a lot of judgment in the faith and all over the world, and that’s the main reason why I think our young people are shying away and trying to figure things out on their own. If we had a generation of leaders who were genuine and relatable on top of their creativity, there would be an amazing shift in the progress of our younger generation. I know the statement “honesty is the best policy” is a cliché, but it’s also so true. Everyone has a past, and everyone struggles with something. If we are honest about those struggles instead of trying to cover them up, we will find it is much easier to reach and connect with those around us.