Watching “Watchers” Watch Where Jesus Went . . . and Why

Watching “Watchers” Watch Where Jesus Went . . . and Why 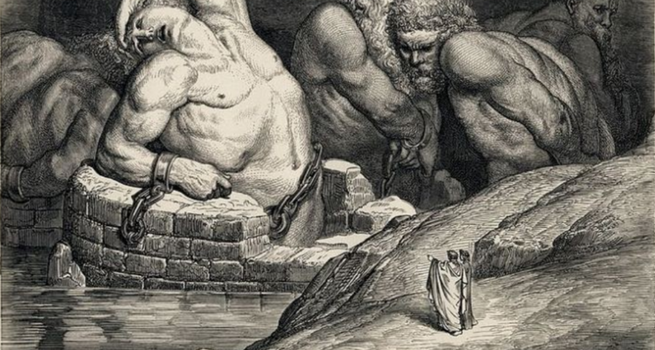 Some biblical passages have appropriately earned the reputation of straining the capacity of interpreters to understand and apply them. One such section in the first Letter of Peter to the “exiles of the Dispersion in Pontus, Galatia, Cappadocia, Asia, and Bithynia” (1:1 NRSV) can be found in 3:14-22. Teachers and preachers have scratched their collective heads for generations, attempting to articulate clearly what these words must have meant to the people who first heard them . . . and then what they might mean to us. And, what difference it makes.

While it seems clear that Peter hopes to encourage those suffering in one way or another for the sake of the gospel, every word in the densely packed central verses of the section is subject to varying interpretations, creating a vast marketplace of possibilities, a veritable plethora of potential explanations. Rather than explore all the options, I want to focus on the most likely scenario exegetically, however novel it may appear at first blush to Adventist readers for whom the dead are dead, period.

In context, our author begins the passage (vs. 14-22) addressing those in his audience who have apparently experienced painful opposition or oppression for their commitment to Christian principles. Believers are blessed if they suffer for doing what is right; this is certainly more noble than suffering the expected outcomes of an evil course of action. The reason for this assertion emerges from the fact of Christ’s sacrifices on behalf of the unrighteous but also from what is, by all counts,  an intriguing even if complicated travelogue of Christ’s cosmic, post-resurrection journey to address disobedient “spirits in prison” who resisted God and harassed people in the time of Noah, moving then to his triumphal entry into the presence of God, with authority and control over heavenly and earthly powers, including the angels.

So, what in the world is going on here? Or, maybe better, what is going on beneath and beyond the world? Something connected to Genesis 6:1-4 and its description of disobedient “sons of God” who married “daughters of men,” giving birth to the “heroes who were of old, warriors of renown” (Gen. 6:4 NRSV) while the Nephilim (the fallen ones) roamed the land. Something for which Peter’s audience evidently needed no further explanation. Something already part of the theological air the original hearers were breathing. But something that leaves us scratching OUR collective heads.

What is it, then, about the opening of the flood story that connects in any way with Peter and his listeners and with the suffering and triumph of Christ? Does the answer to this question have anything to do with “spirits” or “prison”? We are confronted in Genesis 6:1-4 by the interpretational dilemma of “sons of God” cohabiting with “daughters of men.” If one understands “sons of God” as they are portrayed elsewhere in the Old Testament (Deut. 32:8; Job 1:6, 2:1, 38:7; Psalms 29:1, 89:6; Daniel 3:25), they should be seen as heavenly beings of some kind. But, however exegetically sound this identification is, what does it mean that angelic beings married humans and had children by them, heroes and warriors? Genesis 6:1-4, not unlike 1 Peter 3, also turns out to be an interpretational Gordian Knot.

While we struggle to understand exactly what Genesis 6 meant, Jewish writers from the time between the testaments “figured it out.” They produced wide-ranging and varied religious books which over time came to be known collectively as the Apocrypha and the Pseudepigrapha. Among the at times unusual documents in the Pseudepigrapha (writings falsely credited to ancient biblical saints), two in particular, the books of Enoch and Jubilees, pick up the themes of Genesis 6 and in doing so introduce us to the “Watchers.”

First Enoch 1-36, known as The Book of the Watchers, derives from the 4th or 3rd century BC and depicts fallen angels, the Watchers, cohabiting with women who then bear the Nephilim (the fallen ones) and teach humans evil practices, all of which constitute serious enough moral violations as to necessitate punishment and cleansing by the flood. The book then describes the travelogue of Enoch throughout the earth, down into Sheol and then into the heavens.

The book of Jubilees (chapters 4 and 5) describes the Watchers similarly, attributing the fearsome giants in the land to the marriages between heavenly Watchers and human women, but the book also describes the punishment of these “angels,” by which they are consigned to the depths of the earth, awaiting their unhappy fate.

But this entire scenario of celestial angels and terrestrial women does not end with the time between the testaments. A number of New Testament passages now make more sense in light of these popular theological traditions floating around, whether the stories were perceived as true or not. In particular, Jude 6-7 speaks of angels who left their proper dwelling and, like the inhabitants of Sodom and Gomorrah, engaged in unnatural lust and will suffer punishment in the end. In addition, 2 Peter 2:4-10 shares a number of commonalities with Jude and 1 Peter in its depictions of sinful angels, Noah and the flood, punishment, imprisonment, and the final judgment, all calculated to demonstrate God’s control over evil forces and commitment to rescuing the faithful.

So, we come full circle, back to 1 Peter 3 and to this conundrum of Jesus’ post-resurrection travels on a journey to notify the spirits in prison of the coming judgment and of his ultimate position of power and control over them. Peter’s audience thought immediately of the angelic Watchers, of their moral collapse, of the resulting children, of the mischief they created and still create for the saints, of their imprisonment in preparation for the final judgment. As we watch Watchers watching where Jesus went, we also discover why it mattered at all. For believers suffering for the sake of the gospel, the good news is that whatever trouble these ancient but fallen angelic beings and their offspring might be causing, Jesus made a point of stopping by their prison to notify them that he had suffered, died, been resurrected, and was just then on his way to heaven where he would exercise control over these imps under the authority of God. Suffering saints need not worry about forces that stir up oppression and pain because Jesus has already told them off and was sitting at the right hand of God to keep them in check.

Watching Watchers watch where Jesus went, believers in Peter’s audience found themselves encouraged to face anything thrown their way.

Memo to the Watchers: You’re toast!

Memo to the “exiles of the Dispersion in Pontus, Galatia, Cappadocia, Asia, and Bithynia”: The Watchers are toast! Be of good courage!

PS: Is this a factual account of how things really went down—in Genesis, Enoch, Jubilees, 1 and 2 Peter, or Jude—or are the biblical authors simply using popular stories to make a point about God’s control in order to build our faith? We may just have to ask St. Peter at the gates of heaven; he will know.