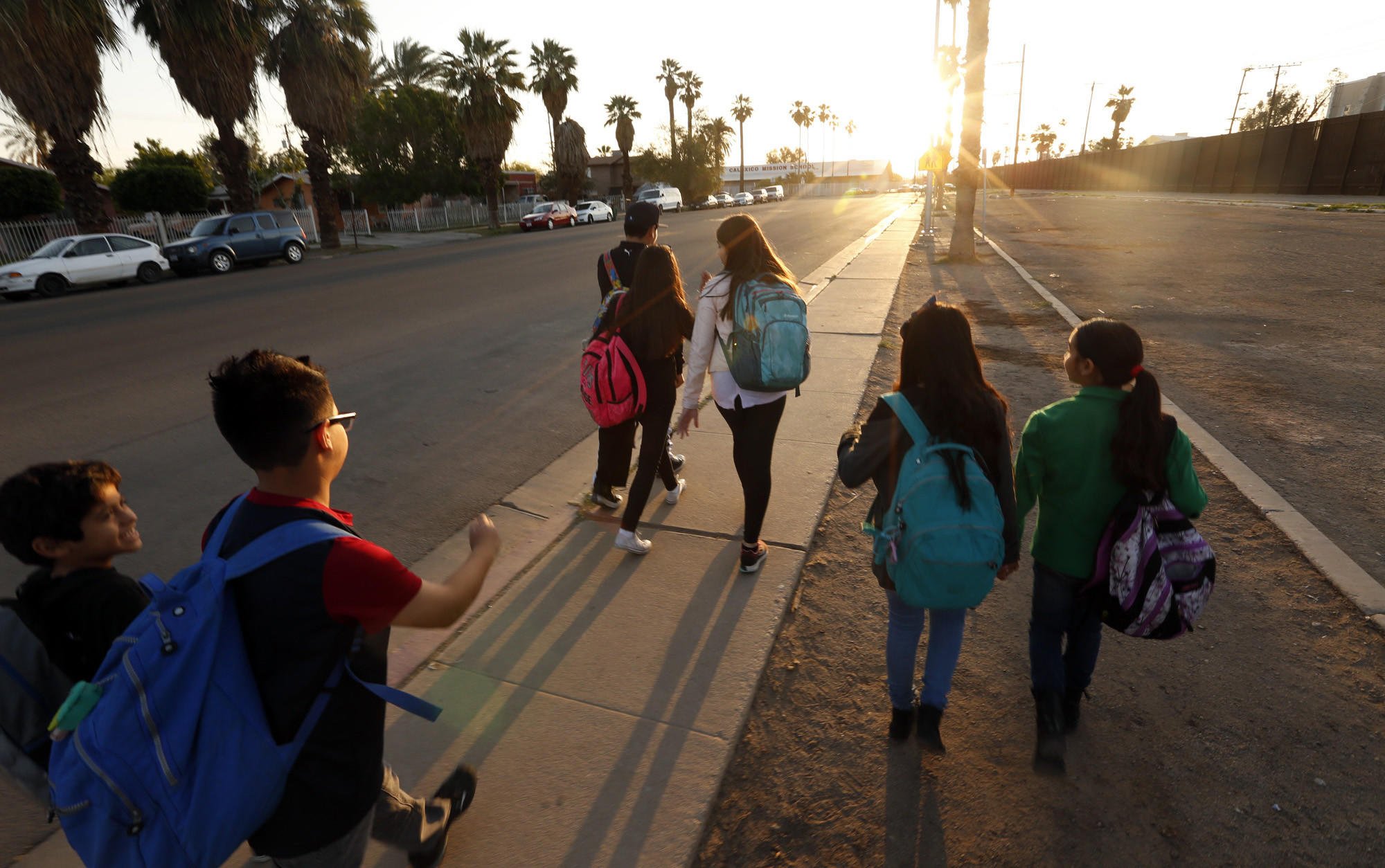 Calexico Mission School Thrives on California-Mexico Border. Calexico Mission School, part of the Southeastern California Conference of Seventh-day Adventist school system, thrives on the California-Mexico border. The school was built 80 years ago by Adventists who saw the border as a mission field for doing God’s work. Its logo includes both the U.S. and Mexican flags. Of the school’s roughly 300 students, about 85% are Mexican citizens. For many parents, the cost of the private school’s tuition is a worthy investment for an American education and the ability to attend an English-immersion school. About a third of the school’s students are on scholarship. Though many hail from upper- and middle-class families, their primary concerns center not on immigration but the economy. The school’s first-year principal, Oscar Olivarria, was once one of those students making the trek from Mexicali. His wife, Tanya — who is of Russian descent and learned Spanish after growing up in East Los Angeles — teaches sixth grade at the school. Their children, Yakov and Vika, whose first and last names reflect their parents’ Russian and Mexican cultures, are students there. From the Los Angeles Times, “Wake up, cross the border, go to school: For some Mexican students, it's a daily routine.”

Malawi Youths Injured in Vehicle Accident. At least 35 youths from Zomba Seventh-day Adventist Church in Malawi have been injured after the vehicle they were traveling in overturned. The vehicle's brakes may have failed. Five passengers are reported seriously injured while the rest had minor injuries and have been admitted to Zomba Central Hospital. Some passengers were injured by jumping out of the vehicle before it overturned. From the Nyasa Times, “35 SDA youths injured in road accident in Zomba.”

Australian Congregants Open Food Pantry for Needy. The Seventh-day Adventist Church has opened a food pantry in Gunnedah, Australia, to provide a resource for families struggling financially. Aligned with Foodbank Australia, the pantry sells products that are out of specification, close to date, have incorrect labeling or damaged packaging, as well as excess stock and deleted lines. Managed by church volunteers, the service sells non-perishable items at discounted prices such as canned vegetables and fruit, biscuits, chips, sweets, home care products, baby formula, diapers, fresh fruits, and vegetables. Church volunteer Maree Roach said Foodbank Australia distributes surplus food from supermarkets to charities and community groups across Australia to support families and individuals in need. Without Foodbank accessing this food, most of it would go to a landfill. From the Namoi Valley Independent, “Gunnedah Food Pantry helps those in need.”

D.E.A.F. Ministry Celebrates 25th Anniversary. Founded in 1992 to interpret services for the deaf and hard of hearing, the ministry Deaf Everywhere Are Family (D.E.A.F.) recently celebrated its 25th anniversary with a three-day worship meeting at the Hudson Seventh-day Adventist Church in Massachusetts. Events included a keynote speech by Pastor Jeff Jordan of the Southern Deaf Fellowship, a talk by host church Pastor Robert Sierra, socializing, meals, Bible study, slideshows, and video messages from former members. The D.E.A.F. Ministry is an oasis where attendees can meet other deaf people, communicate in their own language, and be themselves. It is the only time some of them truly “talk” to another person all month. “Only three percent of religious services have American Sign Language interpreters available,” said founding member Jess McGowan. “Without interpreters, the deaf might as well be sitting in a cafe or a shopping mall (instead of church). About half of our group, which gathers monthly at different churches, are originally SDA, and half are from other denominations,” she said. As head of the Southern Deaf Fellowship, Pastor Jordan advises church elders and ministers for special needs populations within their congregations. His signed and interpreted sermons are posted on YouTube. He travels frequently to work with deaf students in countries such as Brazil, the Philippines, Barbados, Spain, and India. From Telegram.com, “Deaf Christian Fellowship Celebrates 25th Anniversary.”

South African Adventist Church Members Feed Poor. Word of Truth, a Seventh-day Adventist Church in Malvern, South Africa, started a soup kitchen last year that was held once a month on a Sunday. But after seeing the need to do more, members also decided to start supplying vegetables every Monday to the less fortunate in the settlement. The vegetables are sponsored by Fresh to Go. Pastor Ndabezinhle Mvelase said, “You cannot be preaching about God and salvation to a hungry person. You need to attend to all their needs. This includes feeding the hungry, caring for the sick, and also nurturing their souls.” The church has identified a high level of poverty and unemployment in the community and decided it has to help. The church is planning to supply the needy with a meal every day. “We are busy working on supplying those in need with a meal every day because some go to bed with an empty stomach," said Myelase. The church also plans on buying a property to open a community center and will be hosting a series of events to raise money to buy the property. From Joburg East Express, “Word of Truth church truly ministers to the needy in Malvern and surrounds.”