Nina Vallado uses film to delve into the story of her relationship with her nonverbal sister Lisa, hoping Sisterly will increase understanding of people on the autism spectrum.

Question: You hosted your first screening of your documentary film Sisterly on the Andrews University campus last week. How did it go?

Answer: The first screening was a tremendous success. I couldn’t have imagined a better outcome. I had my family, my friends from all parts of the country, my professors, classmates, kids I babysit, and students of Andrews I have never even met all there.

The film is about the relationship between you and your sister Lisa, who is just one year younger than you and on the autism spectrum. Why did you want to create this film? How long did it take you to make?

I came to Andrews and knew I had a story to tell: my sister’s story. From there, my film was going down so many different directions. For the first two years, I was trying to objectively film my sister and make a story purely about her experience and point of view. And I couldn’t film throughout the school year because I was at Andrews and Lisa was in California finishing high school. To tell her story, I would need to be with her all the time, at least enough to capture a story together.

I changed the story after I asked myself why I wanted to tell this story. The answer was because I did not know my sister the way I wanted to know her. She was communicating for the first time in so many years that I felt like she was a completely new person. Above all, I became interested in our relationship. As much as I did not want to be in the film and spotlight Lisa, somehow, I ended up in the story. It became a very personal and challenging project for me but one that I am extremely proud of. 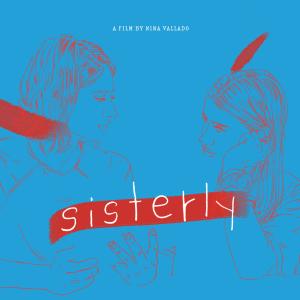 How do you describe the film to people?

I say that this is a film about a sisterhood impacted by autism. It is a film that explores the relationship between two siblings and how autism changes the whole dynamic of the family, especially closeness between siblings. Sisterly is a story about a search for connection, friendship, and understanding.

Lisa didn't speak until she was 16 years old, is that right? How does she communicate now? What does she think of the film?

Lisa did not communicate her own thoughts, ideas, or feelings until the age of sixteen. Years of therapy had trained her to respond verbally to certain cues and questions, but it could never get her to express herself. When she was sixteen, she went to Texas to visit HALO where this mom discovered a way to communicate with her nonverbal son. After a friend of Lisa’s went there and returned with successful communication, my mom thought we ought to try with Lisa.

Lisa communicates with a letterboard or a stencil board. When a question is asked, the person asking the question holds the board, and Lisa points to one letter at a time. After each letter, Lisa writes it down, one by one. Soon, words are formed and thoughts are expressed.

After the screening at Andrews, my mom asked Lisa what she thought of the film, and this is what she said:

A diary of emotions coming to life.

Nina Vallado you are very brave.

I felt very included throughout the story.

I trusted you to make our story meaningful to other siblings.

I felt my desire to talk get even stronger, so we can lay down the barriers that disconnect us and rebuild a relationship that we started long ago.

I so wanted to say that I am so happy that you are my sister.

Having autism makes my life difficult, but watching you all my life makes me believe that life is also so exciting and beautiful.

I love you so much.

What message do you hope to get across to people with your film?

I wanted to make a film that brought awareness to autism, especially to individuals like Lisa. In the end, the message I want for people to take away is to think about their families and the challenges they may have. I want siblings to feel connected and motivated to tear down the walls between them.

I also want to show that awareness of autism has been achieved, at some level, but inclusion of people with autism has not. I want my film to be an introductory piece to how my sister is, how I interact with her, and how others might interact with her.

I want Lisa to be included in society, and I hope my film helps with that.

You organized a Kickstarter campaign to raise money to finish the film and submit it to film festivals. How much money did you raise?

I organized a Kickstarter for funding the finishing of the film. At that point in time, my film was in post production. I had done the bulk work of renting equipment and filming.

The campaign helped finish the film by raising money to pay for professional work on the film. My goal was to raise $10,000, and we raised $11,100. I had a few other private donations that did not go through Kickstarter and that brought us to about $14,000. The extra helped give me more creativity in finishing the film and will help to bring the film greater exposure.

Where have you submitted the film so far? Where do you most hope it will be screened? Beyond festivals, how will the film be distributed?

I have only entered my film to a few festivals so far. I plan to submit to many more, but I am finishing up classwork and school first.

During the festival rounds, I plan to have private screenings for autism groups, churches, and communities that want to bring the film there.

I do not have a dream festival to get into, but my dream audience is a community of people who have siblings on the autism spectrum. They are my niche audience, and I believe they are the ones who need a story like mine and Lisa’s.

After the festivals and screenings, I haven’t quite figured out the means of distribution, but I want it to be accessible to all people and not create exclusivity for it. So, we’ll see!

How do you feel your film is different or the same as other films that talk about autism?

Another element that makes our story different is that it is about sisters. Many of the films I have seen about autism tend to focus on the individual with autism, the parents, or teachers. While their perspectives are just as important and necessary, I felt like the sibling aspect has a lot of depth to explore.

What can you say about your experience studying filmmaking at Andrews?

My studies in documentary film at Andrews have been the biggest growing experiences in my life. Studying storytelling and filmmaking at the philosophical level has been my favorite part of my studies. My favorite classes have been the directing and film histories. I love learning about the nuances used in earlier films, and studying world cinema has opened up my eyes to different cultures, symbolism, and creating stronger narratives.

Why did you want to be a filmmaker? What are your career goals? What is your next project?

I chose to be a filmmaker to connect with people. I chose to tell stories for a living to bridge the gaps in our society with empathy and understanding. While I love filmmaking, I have discovered a passion for just broad storytelling. I love radio documentaries and documentary photography. I know I am a documentarian, and I want to explore different mediums for nonfiction narratives.

Career-wise, I haven’t gotten it all figured out. I am at a place where I want to explore and allow for learning. I have accepted that I do not have my five-year plans all laid out. Although I am a person who tends to enjoy spontaneity less than others, I am going down the path of the unknown and embracing it.

I do not know what the future holds in terms of projects, but I love the idea of exploring family roles and subjects again.

What do your parents think of your film? Has making the film changed your relationship with Lisa?

My parents were proud and surprised. I know they loved the film, but they were surprised because I think they forget that I am studying filmmaking, so I know a thing or two about what I am doing. They were surprised at how it all came together. My mom said she was also surprised, but understanding, that I had experienced my sisterhood the way I described it in the film.

This film changed my relationship with Lisa in such a positive way. The film allowed me to fail and succeed in our relationship. I saw my mistakes and learned from them. This film has taught me that it is okay to try to make an effort in the relationship even if it hurts or fails in the end. I have learned to take risks, even small ones, to better our sisterhood.

Is there anything you wish had turned out differently about the film? What do you like the most about the finished product? What did you most enjoy about the making of the film?

I would not change a thing about my film. I love all the components — the imperfections, successes, music, animation, and storyline.

One of my favorite aspects about making this film was working with professionals in the industry to make the film the best that it could be. I hired a composer from Portugal and recorded the soundtrack in Iceland. My sisters and I got to go to Iceland and be a part of the recording session. It was the most unforgettable trip of my life because of the experiences in Iceland but also because it was the first time Lisa was able to travel without either of our parents and just be with her sisters. She said it was the first time she felt like an adult, and I was happy to have been a part of that important experience for her. 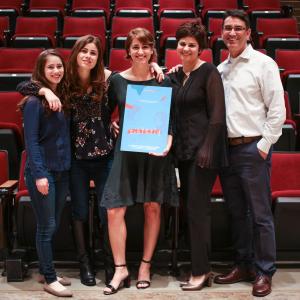 Nina Vallado, 22, is completing her bachelor of fine arts degree in documentary filmmaking at Andrews University with a history minor. She graduates this May. She is the oldest of three girls. Her family is from Rio de Janeiro, Brazil, and moved to the United States in 2001.

Anyone interested in organizing a screening of Sisterly can contact Nina at nina.vallado@gmail.com. The film will be more widely available in 2018.