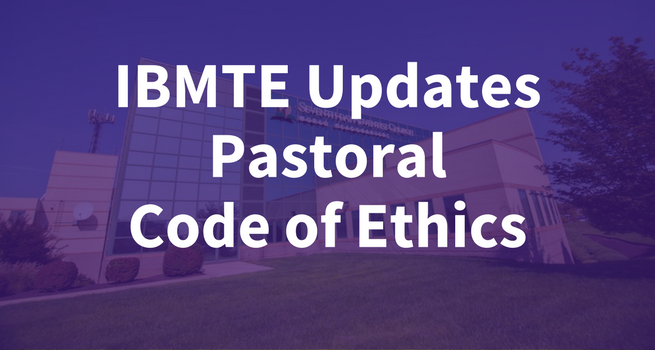 The International Board of Ministerial and Theological Education (IBMTE) voted on April 4 to accept adjustments made to a Ministerial Association document on Pastoral Ethics in its session at the Seventh-day Adventist Church headquarters in Silver Spring, Maryland, United States. The voted action capped a thorough vetting process that involved extensive discussions and consultations across several church departments and regions for a couple of years.

The Pastoral Ethics document is an appendix to the more comprehensive IBMTE Handbook and its chapter “Denominational Statement for Endorsement Process.” The Handbook addresses the entire process, curriculum, and outcomes of pastoral formation; whereas endorsement pertains to those who teach religion and theology. “[Endorsement] is a means by which those who teach pastors affirm and confess their faith,” said Benjamin Schoun, former chair of the IBMTE, who chaired the Handbook revision process.

Geoffrey Mbwana, who now chairs the IBMTE, explained that the Handbook is a dynamic document “as times change and realities come to view.  We went back and looked at the Handbook and saw what we needed to update, and the process was global.”

Education director of the world church Lisa Beardsley-Hardy agreed as she explained that the goal of the board was “to listen to the needs of the field, to be responsive to that, [and] to adapt to it.” She reminded that the process involved “reviewing the Handbook page by page . . . to ensure that what we're doing in preparing pastors is concordant with mission needs around the world.”

Adjustments to the Pastoral Code of Ethics

While the first version of the Pastoral Code of Ethics was recommended by the Ministerial Association in 1992, every time a new edition is prepared, some adjustments are made to the text, said Anthony Kent, associate secretary of the Ministerial Association at the General Conference, responsible for crafting the wording of the updated document. “The Code of Ethics has been refined and expanded on several occasions, most notably in 1997 with the publication of the Seventh-day Adventist Minister’s Handbook and in 2009 when it was revised,” he said.

The version voted by the IBMTE on April 4 tries to make room for regional differences in procedures in pastoral and ministerial practice while advocating for a unified system of ethical principles. Particularly in the Pastoral Code of Ethics, the board made its best effort to make the language clearer. For example, the phrase “Give full time and attention to the ministry as my only vocation” was changed to “Abide by my employing organization’s employment policies.”

The major significant changes to the text, however, are included in the “Ethics and the Law” section of the document which has a completely new sub-section on “Child Safety” and revamped sub-sections on what now are called “Physical Facilities,” “Supervision,” and “Staff Background.”

The “Child Safety” paragraph reminds everyone that “in many countries it is a legal requirement for those working with children . . . to attain a police check or equivalent clearance from a government entity.” Thus, pastors ministering in such countries are reminded “to ensure they have the necessary legal clearance to minister to children.” The sub-section also explains that irrespective of any legal requirement enforced by local authorities, “the minister’s physical contact, behavior, conversation, and ministry with children needs to exemplify the highest moral, professional and Christian standards.”

“We need to have clear statements about what our expectations are for protecting children and [what constitutes] ethical behavior toward children,” said Beardsley-Hardy.

Both the “Physical Facilities” and “Supervision” sub-sections try to use vocabulary that makes the physical and emotional well-being of everyone involved in church activities a priority. At the same time, they strive to protect the church from legal liability.

“Pastors and theological teachers are held to high ethical standards, and the updated document clarifies the ethical expectations for how they conduct themselves,” said Beardsley-Hardy.

A Word on the Process

The process of updating the Handbook and associated documents on pastoral and ministerial training started in 2015 when an IBMTE Handbook revision task force met at Andrews University for the first session of discussion in July. Subsequent meetings in the Philippines, Australia, and Kenya in late 2015 and early 2016 shaped the documents step by step; suggestions were discussed and often incorporated. As part of this process, a dialogue session with scholars also took place in Atlanta, Georgia, United States in November 2015 at the annual meetings of the Adventist Society for Religious Studies and the Adventist Theological Society.

“[The IBMTE Handbook revision task force] had representation by expertise, by church administrative levels, by region, by the broad areas of ministry,” said Mbwana, who stressed that the International Board of Ministerial and Theological Education worked “very intentionally” to appoint task force members with the most variety of backgrounds as possible.

Beardsley-Hardy explained that among the board members were people from every relevant area. “We had both men and women representing theological education, pastoral ministry, and those serving in chaplaincy,” she said.

Mbwana said he believes that this process, while painstaking, is essential. “The way the Seventh-day Adventist Church does its work is through committees,” he said. “We don’t elect or appoint a king who then makes all these pronouncements. We work through committees.”

Kent also emphasized the consultative nature of the process. “The General Conference Ministerial Association received input from pastors, church administrators,  and Office of General Counsel (OGC) as well as Adventist Risk Management Service. It has been a thorough process,” he said.

This story was written by Marcos Paseggi (Senior Correspondent, Adventist Review), and originally published on AdventistReview.org. It is reprinted here with permission.