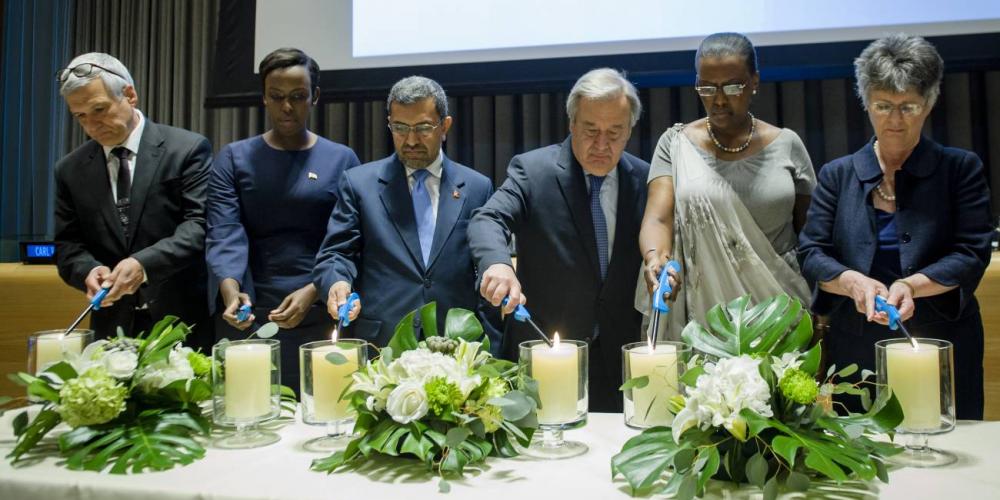 Carl Wilkens sees speaking engagements as an opportunity to share Christ through storytelling.

The Seventh-day Adventist who saved the lives of hundreds of orphans during Rwanda’s 1994 genocide joined the United Nations secretary-general and other figures in addressing a special memorial ceremony at the UN headquarters in New York.

But the speech was just one of 11 made over the past week by Carl Wilkens, who was working as the director of the Adventist Development and Relief Agency in Rwanda when the violence erupted, killing an estimated 800,000 people in three months. Two speeches were given over Skype, and he also met with students at eight high schools and colleges in New Jersey and Pennsylvania.

Wilkens sees speaking engagements as an opportunity to share his faith through storytelling, much like Jesus through the Sermon on the Mount in Matthew 5.

“The message that Jesus gave in Matthew 5 is this: ‘If you open your hearts to other people, there is a much greater chance they will open their hearts to the Father,’” Wilkens told Adventist Mission. “So, I share stories from my heart.”

A favorite story unfolded at the beginning of the genocide. Several neighbor women stopped a group of armed men from entering the home that Wilkens shared with his wife Teresa and three young children in Rwanda’s capital, Kigali. The women convinced the men to leave, saying, “Their kids play with our kids.”

“I tell people that this was the work of God,” Wilkens said in the interview.

In relating the story to 80 students at a high school in New Jersey this week, Wilkens said God could have intervened supernaturally by putting an invisible shield around his home.

“But I believe that it was also supernatural for those women to stand in front of our home and stop the men with machetes and guns and say, ‘No, you cannot go in there,’” he said. “That is for me an even more powerful illustration of divine intervention than an invisible shield.  I think that the fact that our kids played with the other kids for four years was a key part of the divine intervention,” he said. “God saw what was coming, and He used the relationships that the kids were building, just playing around the neighborhood, to build bonds with those women.”

More often than providing an invisible shield, God intervenes by working through the decisions of people, he said, mentioning as an example his children’s decision to play with the other children.

Wilkens and his wife, graduates of Walla Walla College (now Walla Walla University) in Washington state, flew to Africa as missionaries in 1981. Their first two children were born in Zimbabwe, and their third child was born while Wilkens studied for an MBA at the University of Baltimore in Maryland. After his graduation, the family moved to Rwanda in 1990.

When the genocide broke out on April 7, 1994, Wilkens sent his family to safety but insisted on staying behind to bring food, water, and medicine to orphans trapped in Kigali. His brave actions are credited with saving hundreds of lives.  For much of the conflict, he was the only U.S. citizen in Rwanda.

Wilkens had mixed feelings about speaking on Friday, April 7, at the UN, which he believes could have prevented much bloodshed.

“I hold the UN enormously responsible for the loss of so many lives,” he said. “It had 2,500 soldiers whom the people were counting on. The UN was protecting people in schools, but it withdrew most of its troops and left them without protection.”

In his six-minute speech aired by UN Web TV, Wilkens apologized for harboring anger toward the UN for many years.

Speaking to Adventist Mission, Wilkens said he accepted an invitation by Rwanda’s UN ambassador to speak for the same reason that he accepts hundreds of other invitations.

“In sharing stories, I’m able to speak about the values that I believe in, core values that come from the teachings of Jesus,” he said.

Among the other speakers Friday were UN secretary-general António Guterres; Durga Prasad Bhattarai, vice president of the UN General Assembly; Sonia Mugabo, a genocide survivor; and Valentine Rugwabiza, Rwanda’s ambassador to the UN.

Wilkens returned to the United States after the genocide ended and served for 11 years as the chaplain at Milo Adventist Academy in Oregon. A 2004 interview that he gave for a U.S. television documentary on the genocide prompted a flurry of speaking engagements, and in 2008 he made that his full-time job as the director and cofounder of the nongovernmental organization World Outside My Shoes.

“I am exceeding grateful to the Father for the love that I have experienced in my life, and I want to express that gratitude to others,” Wilkens said.

This story was written by Andrew McChesney and originally published on AdventistMission.org. It is reprinted here with permission.

Image: Carl Wilkens, left, joining the UN secretary-general, third right, and others in lighting candles at the opening of the annual commemoration of the International Day of Reflection on the genocide in Rwanda on April 7, 2017 at the United Nations in New York. (UN Photo / Manuel Elias)