Which Ethics? From Which Bible? Revisiting Jose Saramago’s “The Gospel According To Jesus Christ” 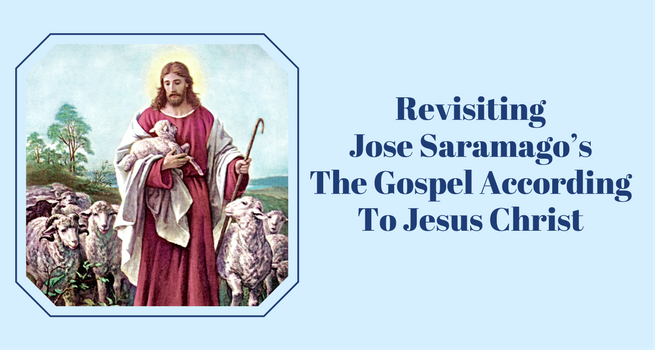 Portuguese writer and 1998 Literature Nobel Prize winner, Jose Saramago, wrote a loose interpretation of the life of Jesus. Some of his provocative additions, that intended to fill up biblical blanks and to present a more human Jesus, resulted in the anathema of Portugal's political and catholic leaders. As a consequence, he left his country and went into exile in Spain where he died some years later. Like Martin Scorsese’s film The Last Temptation of Christ, Saramago’s text articulates a radical post-lapsarian understanding of Jesus’s human nature that is the mirror image of the opposite, and mystifyingly excessive, pre-lapsarian view shared by the majority of Christians today.

Saramago explores the psychological motivations that led Jesus to become a prophet. Only one episode in his narrative reconstruction, concerning his father Joseph’s personality and behavior,  heavily influenced Jesus's identity and work. In the Gospel of Matthew, Herod the Great is informed by the Magi of the birth of a new “King of the Jews.”  But in Saramago’s narrative, Herod instead has a dreamed premonition of the incumbent and threatening arrival. Moved by fear, suspicion, and paranoia, he orders the “Massacre of the Innocents.”  Twenty-five children under the age of three years are killed that night, but Jesus survives. Joseph, who learned of the plan just casually while walking in the city and overhearing a soldier's conversation, neglects to warn other families in Bethlehem, ensuring first and uniquely his son's safety. The ultimate value of his own family and the urgency of the situation obscured his moral lucidity and pushed him to act selfishly. The consequence is that Joseph will be plagued by nightmares for the rest of his life. Being consumed by a profound moral guilt, Joseph will never recover from the devastation of not warning others of the coming slaughter. And, as usually happens in family relations, his existential sadness, hopelessness, and psychological uncertainty will also condition, beyond words and sermons, his son’s identity and formation. Joseph finally redeems himself and, like his son later, dies at age 33, trying to rescue one of his neighbors who is a suspected Zealot. He fails, but in the process, his nightmares finally disappear. Joseph is crucified by the Romans as a revolutionary even though he is completely innocent. From the night of his father's death, Jesus inherits his nightmares. He learns about the massacre from his mother and grows aloof from his family, among whom he can no longer live peacefully. At thirteen, he leaves his family and Nazareth and makes his way to Jerusalem. There he visits the temple and dazzles the elders with his questions about guilt. They are amazed at this child's depth of understanding of this decidedly adult problem.

Saramago’s narrative is not historically accurate and, as with every writer, is also conditioned by presuppositions—in his case, philosophical agnosticism. This pushes his acute and sarcastic irony to be, in some points, irreverent and even blasphemous. But, as a keen observer of the human soul’s depth, complexity, and mystery, sometimes, paradoxically, he may get a better picture of what the canonical gospels are really trying to transmit.

We Adventists, as heirs of the Reformation, are diligent readers of the Bible. But what kind of reading are we producing today? And, what kind of Ethics do we derive from that reading? These are more complicated questions. And potentially more embarrassing ones. Just reading the Bible unfortunately does not automatically represent sufficient and convincing proof of either spiritual depth or human intelligence. With Saramago’s provocative biblical reading in mind, three diffuse Adventist attitudes appear that hinder and limit the benefits we can get from an honest face-to-face   encounter with the Bible, which don’t allow us to honor it as we should.

1. The temptation to over-idealize biblical narratives

We over-idealize biblical characters and events when we detach them from their human and earthly surroundings. The necessity of having clear and absolute models often push believers to sacralize some human realities and over-emphasize their supernatural dimensions. Paradoxically, this strategy ends up tightening the model and diminishing the believer's dynamism and motivation. It thus creates only a ritualistic and formalistic religiosity that calms consciences but does not really produce a transforming experience. Over-idealizing often only hides a rough “effect-delegation,” where the involvement and perfection demanded from the believer is just shifted to the sacred object, thereby increasing its useless and untouchable pomposity.

2. The temptation to manipulate biblical narratives

The opposite mechanism is that of instrumentalizing biblical narratives. We empty the biblical model of its strength by using it to our convenience. This hermeneutical short-circuit occurs when we do not make a clear distinction between what belongs to our own culture and what belongs to biblical standards. We then produce a rough manipulation of the biblical material. This process is often done unconsciously, particularly through culturally questionable forms legitimated by superficial Biblical reading. This was visible in the dominant Christian culture, including Adventism, that supported Apartheid in South Africa or slavery/racism in the U.S. and Europe. But paradoxically, it is also present today among Latin-American and African Adventists, in the women's ordination issue when, with unbreakable certainty, without hesitation and doubt, they pretend they are not defending their own culture but just standing for what the Bible says. Not being able to distinguish between what we say and what the Bible says is the first sign of idolatry and undue universalization of relative cultural elements.

3. The temptation to read only some biblical narratives

But the more diffuse and detrimental mechanism to neutralize the biblical message today, in my opinion, is neither over-idealization nor manipulation but the unilateral reading of the Bible. This offers the best alibi to diminish its strength without negating or destroying it. It produces a meaning that is not only false but also not completely true. Consider an example:

The central metaphor of Psalm 23 is God as “The Good Shepherd.” Christians have read it this way for centuries, finding in it more consolation, peace, and trust, than in perhaps any other Bible chapter. Behind the kind shepherd though, we find in reality the profile of a valiant and daring shepherd. And no shepherd could be like this if he behaved outside home as he behaved at home. Outside there exists endless risks and dangers. Thus, the gentle shepherd must also become a courageous and fearless adventurer. He assumes a different attitude characterized by full attention, constant alertness, quick reactivity, and determined leadership. He conquers and takes care of us, not only with his kindness but particularly by his courage—to protect what is his own. He is the protagonist and becomes our Hero because he is able to show a heroic, endless and daring love for us all. This is a more expansive message of the psalm. This wonderful and reassuring metaphor has unfortunately been covered and inactivated by a unilateral reading. And three other important dimensions of this text, that Martha Nussbaum would certainly call real “Upheavals of Thought,” are obscured. In this psalm, we find in fact: 1) a theological, 2) an anthropological, and 3) an ethical—revolution.

First, a Theological Upheaval results from the multifaceted description of God himself. The text proposes a second strong and contrasting metaphor of God—usually overlooked by Christians. Its implications do not belong to our language, aspirations, symbolic liturgy, ecclesiology, or ethics. It proposes the metaphor of God as a housewife who enthusiastically “prepares a table and fills our cups to the top.”  How could God himself be also like a woman, like a hard-working cook, similar to a humble and reliable housemaid? The strong, visible, and heroic male role of the first metaphor is limited and contrasted here by the discrete, generous, and anonymous female role attributed to God in the second metaphor. God as housewife dedicates the best of “her” time not to increase the family income or guarantee the habitability of the building where the family lives but to serve and to make the people who live there, special, happy, and flourishing.

Second, an Anthropological Upheaval relates to the categorical refusal to understand human beings in a reductive and homogeneous way. This psalm, in speaking of a new God, speaks also of a new human being, using two parallel and contrasting anthropological metaphors—because humans are never just one thing. As Erich Fromm wisely used to remember, we humans are describable only through paradoxes. We humans are sheep, says the first metaphor, but also persons, says the second metaphor. As sheep, we do not choose our own way, a place to rest, or any strategy. All this is the shepherd’s job. But the second metaphor demands a radical transformation of the sheep. Yes, believers must learn to be sheep but not to remain only sheep. In fact, the psalm narrates how sheep live an unexpected metamorphosis, a radical transfiguration. Sheep become persons in the second metaphor. And they do this through God’s intervention. The housewife is not only a cook but also a midwife because her actions and care make possible the birth of new beings. In other words, the main role of God as housewife is to transform sheep into persons.

Third, an Ethical Upheaval is related to the refusal to conceive and articulate human action only through the categories of coherence, reliability, control, or restraint. Human action is also structurally trans-gressive. It always goes beyond reactionary human conventions which try to leave things, situations, and persons just like they are—producing only a palliative and accommodating behavior. Without this insubordination capacity Ethics, could not be really trans-forming. The slaves would remain slaves, the oppressed oppressed, and the oppressors and masters fearful and stupidly compulsive. An Ethics of a disciplined obedience, though important and necessary, is insufficient to describe the complete vocation of the believer. Here wisdom becomes capital in order to distinguish when to obey and when to go beyond. Sometimes, we are asked to listen and follow without fully understanding. This may even sound scandalous and shocking for a rationalist, autonomous modern, or post-modern mind. Sheep are not asked to produce philosophical initiatives. They are rather characterized by their instinctive reaction to trust and to follow. But other times, we are urged to go beyond, to behave as honorable guests who dare to speak, think, share, and celebrate—as persons. An Ethics of obedience must learn to dialogue with an Ethics of “human flourishing,” where we become creative through imagination in order to break chains of spiritual, psychological, and social discrimination and alienation. The transformed sheep start talking, proposing, creating, and going beyond. In God’s presence and stimulated by God’s motivation, they become the true protagonists.