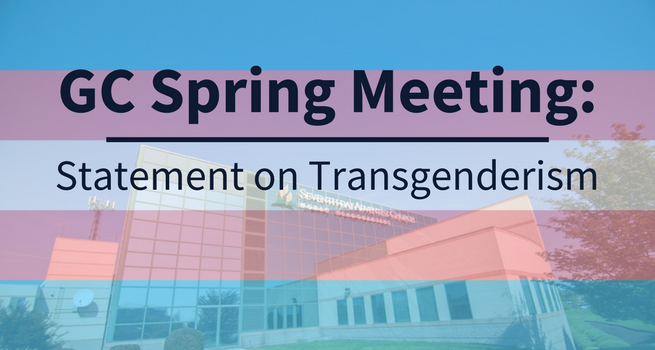 The last item on the agenda for day one of Spring Meeting was a “Statement on Transgenderism.” The statement, crafted by the Biblical Research Institute (BRI), a General Conference entity, has been in the works for several years. A previous version of the statement was set to be voted on during last fall’s Annual Council, but dissension among the executive committee led BRI to revise the statement and re-present it at Spring Meeting.

The presentation of the revised document at Spring Meeting spanned an hour and a half. Artur A. Stele, General Conference Vice President, introduced the topic, acknowledging its sensitive nature and telling the committee BRI sought advice from both inside and outside the church, including specialists. President Ted Wilson added that this document has now gone through 21 revisions, and while it may not be perfect, it has been “vetted and vetted and vetted.”

Brasil de Souza then led the Committee through a reading of the three-page statement. Afterward, the floor was opened for questions. Many committee members issued praise for the statement. A few offered concerns and critiques.

Randy Roberts, pastor at the Loma Linda University Church, questioned the use of Deuteronomy 22 in the document and the church’s support of only the verses regarding gender, sexuality, and marriage, while seeming to disregard the verses on other subjects. Brasil de Souza responded by saying the Church seeks to uphold those verses that speak to God’s original intent for humans in the Garden of Eden. Roberts also mentioned that transgender research is ongoing at Loma Linda University and this should be taken into account.

Allan Handysides, an obstetrician/gynecologist, brought up multiple concerns regarding the wording of the document, particularly the use of the phrase “transgender phenomenon” because it implies a reduction of transgender individuals to “phenomenon.”

Ted Wilson thanked Handysides for his “passion for people,” and said BRI may be open to some phrase adjustments. After several more comments and a reiteration from the front that many specialists and experts were consulted during the document’s creation, Wilson called for a vote. The vote appeared to be unanimous with strong “yays” heard throughout the audience and no audible “nays.”

The “Statement on Transgenderism” can be read in full below.