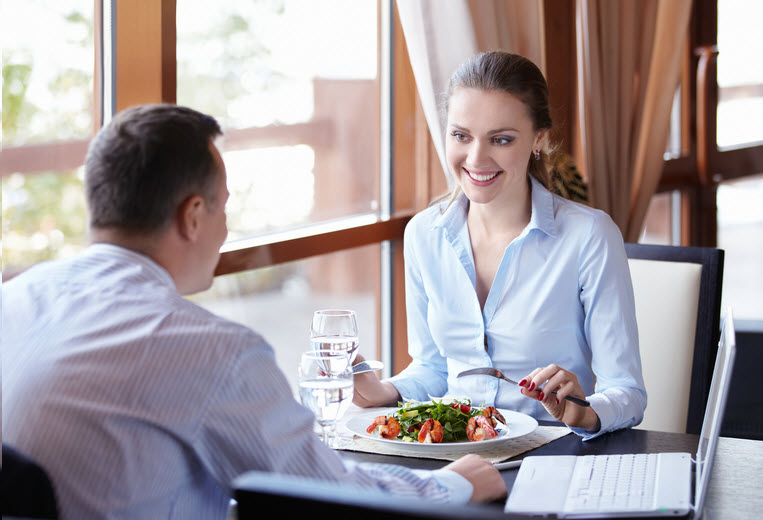 By now, people have heard of Vice President Pence’s “policy” of avoiding eating with women except his wife. Many are applauding his stance as “respecting his wife” and “protecting himself from adultery.” To be clear, if you have an affair, you cannot blame that on a chef's salad. The Devil did not make you do it and neither did the lunch.

First of all, this type of thinking impedes women’s ability for upward mobility. For years, people used the excuse that females should be excluded from various professions (including ministry) because men and women in close working relationships would inevitably lead to rampant sexual encounters. And it is troublesome that someone at the highest levels of government subscribes to this logic. What if by some unforeseen event, Donald Trump does not complete his entire term? If Pence becomes the President of the United States, will his wife be invited to closed-door talks with Chancellor Merkel? Will Prime Minister May get the stiff arm unless they have an adequate chaperone? And if he runs in 2020, he has already excluded the possibility of any female running mates. The POTUS and VP spend lots of unsupervised time together. Obviously, a female Vice President for a hypothetical President Pence would be categorically out of the question, regardless of her qualifications. Men who think like this inadvertently (and sometimes intentionally) block women's upward mobility because of their insecurities.

For an administration that has so much to say about radical Islamic extremists, it shares many beliefs, including the idea that women need to have barriers around them to protect everyone from unrestrainable sexual energy. In one case, the barriers are visible—burkas. But these invisible barriers are no better.

And, beside the very valid secular arguments against this line of reasoning, it is disturbing from a spiritual aspect, too. It is disheartening to see so many people lauding Pence's thinking as something admirable. Listen, if he cannot be with women unsupervised because he knows he has difficulty with controlling himself, then by all means, he should take necessary precautions (we do not need multiple gropers in the executive branch). But we should not pretend that this is a virtue to be emulated. If I told you I need supervision around lighters and matches to keep myself from setting buildings on fire, you would be happy that I know my limits, but you would also admit that my behavior is abnormal. You would recognize that I have pyromania. You would urge me to get help. Because it is not an aspirational quality—it's a problem. Say it with me: it is a problem. If a man cannot eat a meal with a woman without the threat of—oops—having sex, that is not a good thing. This does not prove his marriage is strong; it proves that it is damaged. If you cannot be faithful to your spouse except when her eyes are on you, you have an issue. This is not a relationship goal.

Unless we recognize that the source of infidelity lies in the heart of an individual, we will be tempted to kick the can of responsibility down the road. “It was the lunch’s fault! If only we did not eat lunch together, I would have never slept with him!” Or like in this article, one could blame text messages—because unlike snapchat, email, or phone calls, texts are the primary pathway to affairs. Or “it was the fault of her shoulder—if only we had covered her in opaque cloth, I would not have strayed!” Or “it is just all those single parishioners at that church; how could one expect a pastor to have been faithful? Simply move the pastor to another church in the conference, and surely that will take care of the issue!” The more we center our attention on these artificial “reasons” why people cheat, the more we avoid dealing with the emotional and cognitive roots that are really the source of it all. That is why Christ admonished that “anyone who looks at a woman lustfully has already committed adultery with her in his heart” (Matthew 5:28). If your heart is guarded, a soup and sandwich is not going to change that. But if you have not dealt with your heart issues, no artificial rules or barriers will prevent you from straying.

It is no secret that there is a significant imbalance in the number of male and female seminarians. During my time, there it was unavoidable, being the only female in many settings. I tutored guys. I was a graduate assistant for the late great Dr. Larry Richards, so I proctored for guys. I studied with guys one on one, and—gasp—I even ate with and hung out with some! Even today, many of my most enduring friendships and closest colleagues are male. However, an incident I still remember involved one of my fellow seminarians taking it upon himself to tell the girlfriend of a mutual classmate that he felt I was spending “suspiciously” too much time with her boyfriend. We had no romantic involvement at all. However, after this seed was sown, she had a negative disposition toward our friendship. My friend felt it necessary to distance himself for the sake of the feelings of his then girlfriend (now wife). I obliged, but I am still saddened that our friendship was adversely affected by unfounded meddling. Incidentally, the gossipy classmate is now a pastor in an estranged marriage due to his own infidelity, another example of the fact that the things we hate about ourselves are often that which we unfairly project onto others. This brother who was so worried about others’ external actions did not adequately monitor his own internal struggles. This is the danger of focusing on arbitrary boundaries such as “no eating together” or “no texting each other.” It lulls one into a false sense of security under the belief that hiding behind artificial hedges will protect your relationships. The truth is this: fidelity and faithfulness are choices one must consciously make each day.

Sex is a choice. Unless you are coerced, raped, or otherwise unable to consent, you choose to sleep with someone or not. With all the male colleagues, supervisors, coworkers, members, acquaintances, and friends I have spent time with, I have never chosen to commit adultery. Now this is not a Luke 18:11 “thank God I’m not like them” boast: I have plenty of my own struggles that I have to work out! Adultery just is not one of them. But there are many ways in which I fall short of God's glory; there are many times when I deliberately choose to go outside of God's will. And just like my willful sinful choices, adultery is also a willful choice. And just like it is imperative for me to accept my volition in those actions, likewise, it is necessary for those who struggle with infidelity to own up to it as an act of volition not something that just “happens.” And just like I am only able to overcome my sin through God's grace, the same grace is available to those struggling with adultery. And all of us—regardless of our struggle—are all afforded the opportunity for forgiveness and reconciliation to God. But this happens when we seek God's mercy, admitting our own culpability. Stop blaming the lasagna.