Book Review: Where Are We Headed? Adventism after San Antonio

Book Review: Where Are We Headed? Adventism after San Antonio 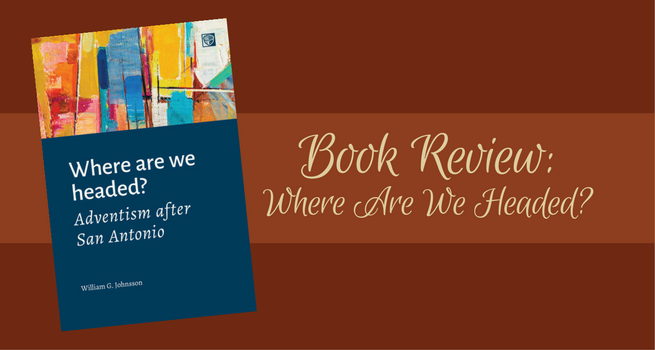 When retired leaders—be they in the realms of government or the church—choose to speak out about the state of the nation or the church, their interjections are often met with some skepticism and with inevitable questions about why they are speaking now. The suspicions are that they are exercising their greater sense of freedom after stepping away from their previous responsibility, that they now have less to lose so they can be more honest, or that they are trying to fend off a growing sense of irrelevance and to re-insert themselves into the debates, perhaps to re-contest some of the arguments they might have lost in their working lives.

Such are the risks (of misreading) that come with a book such as Where Are We Headed? by expatriate Australian and Avondale College of Higher Education alumnus Dr. William Johnsson, now retired for more than 10 years from his long-standing role as editor of the Seventh-day Adventist Church’s flagship journal Adventist Review and more recently as a leader in the church’s interfaith relations. But Johnsson’s strident new book has a different motivation: the church he served has changed—and not for the better.

For Johnsson, the tipping point took place at the worldwide church’s five-yearly business session in San Antonio, Texas, on July 8, 2015—the day of the vote on allowing different practices of ordination among the church worldwide. He describes that as “a truly sad day for the Seventh-day Adventist Church. I am ashamed of what transpired.” While not in San Antonio that day, Johnsson was following closely and in contact with many people who were. He describes being deeply affected by the events of that day—“For a couple of weeks after the Session, I moped and grumped around the house”—and took to writing a response as a way to stop “fussing.”

But it was not so much the result of the “women’s ordination” vote that most troubles Johnsson. In his assessment, despite the continued obstruction and obfuscation by worldwide church leadership, the issue is decided. More and more women are being employed and ordained (even if by another name) in ministry by the church around the world, even in places as diverse as Papua New Guinea and South Africa; their ministry is obviously effective and Spirit-blessed; and this will simply be the way the church is among the next generation. Instead, the larger issues are the damage that is being done to the church by the responses from key church leaders to these realities and what they say about the kind of church some would have us become.

Where Are We Headed? identifies a number of related features from the San Antonio session: a tendency to “remnant” arrogance and exclusivity; the mantra-like statements about the soon-coming of Jesus; the statistical focus of mission; the fundamentalism and “flat” literalism creeping into our reading of Scripture; the continuing discussions of the role of church founder Ellen White’s writings; and the misuse of calls to “unity.” In Johnsson’s “lover’s quarrel” with what the church is becoming, “two radically different versions of Adventism are competing for the future.”

While Where Are We Headed? is open-ended—it is more a series of questions and reflections on the implications if we continue in some of the directions that have been set—Johnsson’s burden is to call us back to “Adventism at its best” and ultimately to Jesus. This discussion is never far away from our need for Jesus, the sufficiency of Jesus, and that the church should be shaped by the presence and ministry of Jesus. While Johnsson is writing about big issues in a global church, he draws regularly on his lifetime of personal experience of following Jesus and writes with a graciousness and passion that is both Jesus-like and statesman-like.

So Where Are We Headed? should not be tarred with the skepticism that sometimes meets post-retirement publications. Johnsson is speaking to, with, and for a broad spectrum of the church. The standing ovation he was given after speaking at the One Project’s gathering in San Diego in February is testament to the respect he is held in across generations and the relevance of what he is continuing to say as an Adventist leader.

As we continue to wrestle with the complicated issues of a worldwide church, we need wise voices that can offer circuit-breakers to our arguments and their continuing faith as a guidepost for our progress. Where Are We Headed? does this, calling us to find our best in Jesus and offering hope for a more authentic Adventism in our frustrating and frustrated church.

Where Are We Headed? Adventism after San Antonio written by William G. Johnsson and published by Oak & Acorn Publishing is currently available as an ebook.

Nathan Brown is the book editor at Signs Publishing. This review originally appeared in TK, an online magazine of news, reviews and perspectives produced by Avondale College of Higher Education, Signs Publishing and Manifest. It is reprinted here with permission.