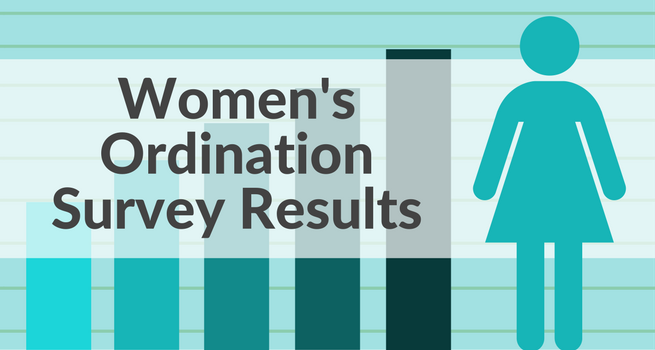 The ordination of female pastors in the Adventist church is one of the most controversial and divisive issues of our day. Vigorous and sometimes fierce debate has dominated agendas and consumed the time and energy of church administrators, pastors, educators, and church members. Over time, the “official debate” has resulted in official decisions and further meetings to manage the conflict surrounding the debate. Efforts to deal effectively with the issue have gone on for decades and spanned two generations. At the same time, there is widespread concern about how recent official actions and the prolonged controversy will affect the unity of the church and its witness in the earth’s final days.

One of our key findings is that there is stronger than expected support for ordination among self-described conservatives and fundamentalists.

Just after the U. S. national election, we asked Spectrum and Adventist Today readers to participate in a short survey with questions about the national election as well as several questions about several controversial social issues including the ordination of female pastors.[1] In this article, we share the findings from the survey questions on the ordination of female pastors. Our hope is to add voices from the church’s general membership to the conversation as our church grapples with one of the most important, controversial, and divisive issues of our day. 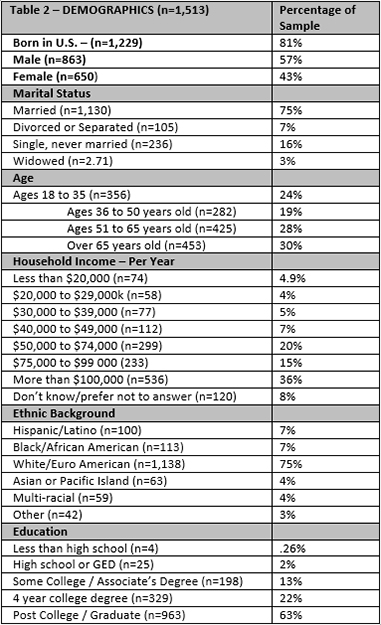 The survey included three response categories relative to the issue of ordination. In response to the question, “Do you favor or oppose having women as pastors in the Adventist Church?” (Figure 1), 87%% indicated that they favored/agreed with the question. An equal number, 7%, either opposed/disagreed or had no opinion. One respondent indicated, “We have a female pastor in our church and just love her.” 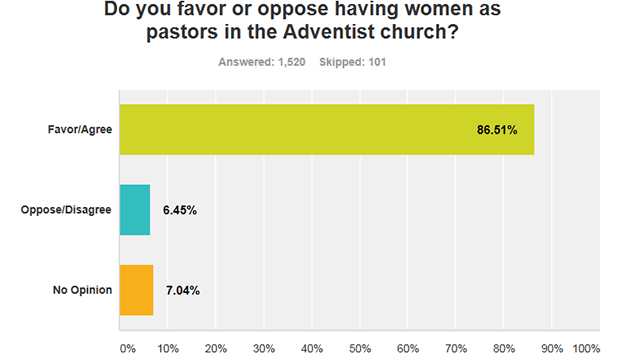 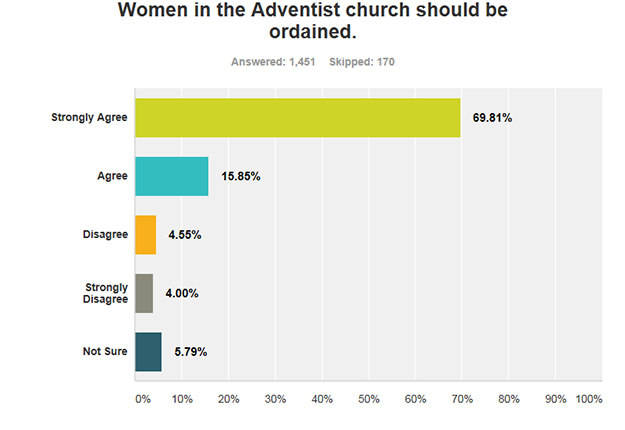 Finally, respondents were asked to respond to the statement “I would support having a female pastor in my own church.” (Figure 3) Nearly all (88%) agreed or strongly agreed, while 8% said they disagreed or strongly disagreed. Only 4% were unsure. The responses to these last two questions show nearly identical responses. Perhaps one of the most surprising findings was the extent to which those with conservative religious orientations supported women in positions of ministry and favored women’s ordination. While no one would be surprised that a strong majority of self-described religious moderates and liberals supported women as pastors and the ordination of women, the degree to which conservative SDAs supported these positions was more revealing. For example, of those who identified as fundamentalist, over one-third (36.5%) favored having women as pastors in the Adventist church (no table provided for this section). For conservatives, almost two-thirds (65.2%) favored having women as pastors. Not surprisingly, 91.9% of moderates and 99.2% of liberals felt the same way.

Finally, religious fundamentalists and conservatives supported having a female pastor in their own church at rates that were higher than might be expected. For fundamentalists, over a third (36.6%) agreed or strongly agreed that they would support a female pastor in their own church. For conservatives, over two-thirds (68.5%) agreed or strongly agreed with this arrangement. Again, not surprisingly, 91% of moderates and 99.5% of liberals felt the same way. While these findings could be discussed in much greater detail, this brief article does not allow us to fully explore all of our findings across religious orientation, a more detailed upcoming article will soon explore how these demographic groups approached women’s ordination and women in ministry.

We also began an analysis of the 450 comments that were made by participants. Several representative comments in support of ordination included statements such as, “Women being ordained should not be an issue. We should have the right to be ordained if that is what we feel God calling us to. Ellen White, who basically was the founder of Adventism as we know it, was female!” Others saw the ordination as a matter of fairness and justice saying, “Unbelievable that a church founded by a woman and who fights for equality, does not endorse women’s ordination. I thought Christians were supposed to be like Christ.” Another said, “I don't feel the GC should mandate anything about women's ordination as there is no clear biblical stance on it one way or the other.”

Some comments seemed to support the status quo on the issue and a viewpoint more aligned with the church’s official position, “I didn't feel your options [in the survey] on the women's ordination questions captured my beliefs. Based on the Bible qualifications for elder I don't feel women should serve as elders, district pastors or senior pastors in multi-pastor churches. I have no problem with a woman serving on the pastoral staff of a multi-pastor church to serve woman and families. I have no problem with women being ordained in an office they are Biblically qualified to hold. If I were the senior pastor of a multi-pastor church I would not have a problem with having a woman on the staff with a focus on woman and families.”

Others were truthfully unsure, revealing ambivalence about the issue and fears about the consequences of continued controversy. One respondent commented, “Regarding women's ordination: not sure what I think, but I feel like both sides are dug in too deep. Cultures are changing and…will come to pass soon enough. Why risk deep division or even separation? That goes for both sides.”

Some comments revealed the frustration and searing pain that comes with the subordinate status of females in ministry. Pain and frustration often leads to fears of a church that becomes divided by beliefs around ordination. A number of comments suggested changes in leadership and made dire predictions about the unity of the church in its present course of direction. As one respondent put it, “The current political climate in the SDA church will not help finish the work. . . . Let’s pray that [this] does not continue to split the church.”

Further analysis of the more than 450 comments may reveal even greater levels of pain, frustration, concern, and ambivalence. Beyond that, an exploration of the relationships between opinions about women in ministry and respondents’ religious orientation, gender, age, income levels, and education will show the nuance and contours of beliefs. These will be explored in greater detail and reported in a future article.

We found that most of the Spectrum and Adventist Today readers who responded to the survey were comfortable with the idea of having female pastors in the church, having them ordained, and having them minister in their own local church. Our sample, while not demographically diverse in areas of ethnicity, marital status, education, and income, is relatively balanced in the areas of age and gender. Most importantly, it represents the full range of religious orientation: fundamentalist, conservative, moderate, and liberal. While there will be debate about how accurately this sample represents Adventist general membership in North America, this study found strong support for women in ministry and women’s ordination. This support was even found in the responses of conservatives and fundamentalists, with 60% of conservatives supporting ordination and 69% supporting women serving as pastors in their churches. This was the most surprising and perhaps most important finding.

We have not, so far, understood the perspectives of the general “lay” membership of the church on many issues, including women’s ordination. These findings give us only a glimpse; yet they reveal more diversity of positions and opinions than was known or expected. For this reason, a broader conversation involving the general Adventist membership is needed. As one respondent commented, “I wish the Adventist church would do a survey of its members including how we feel about church administration, women's ordination, whether or not we support the denomination through tithe vs. some other ministry, whether we agree with the current administration’s stand on a variety of issues, etc. . . .”

We believe that Adventists care deeply about the issue of women’s ordination and that this kind of research is necessary for an informed conversation and eventual resolution.

Greater understanding of the larger cultural perspectives and the Adventist social persona is key to a more meaningful and relevant witness.

[1] In our article The Adventist Vote: Findings from the 2016 National Election Survey (Spectrum, November 23, 2016) we reported on respondents’ religious and political leanings and voting behavior.