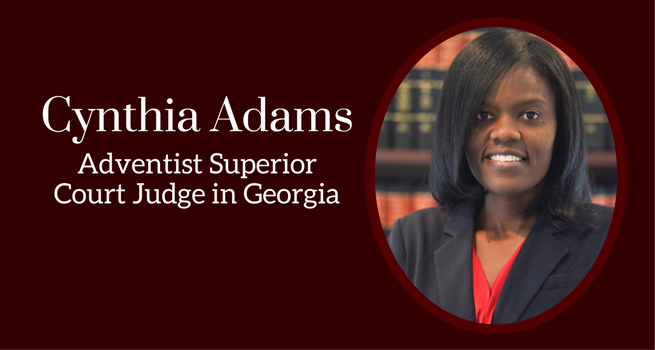 Cynthia Adams, an attorney and member of the Berean Seventh-day Adventist Church in Atlanta, was appointed last month by the Georgia Governor to serve as a Superior Court Judge. She spoke to Spectrum about her passion for law, her faith, and her interview with Governor Nathan Deal.

Question: Congratulations on your recent appointment by the Georgia Governor as Superior Court Judge of the Douglas Judicial Circuit. Have you begun your new work as judge already? Georgia Governor Nathan Deal was considering several other attorneys before selecting you, I understand. What about your experience and expertise made him choose you for the job, do you think?

Answer: Yes, I have begun my role as a judge. I was sworn in on February 13, 2017, and took the bench the following day for my first court calendar.

The job appointment process started with several people interviewing with the Judicial Nominating Commission, and the Commission had the responsibility of narrowing the candidates down to a shortlist. I was one of three people who interviewed with Governor Nathan Deal.  The other two candidates who interviewed were also highly qualified public servants in Douglas County.

I had a wonderful meeting with Governor Deal and was able to share with him my dedication and commitment to serving the county. In the last five years, Governor Deal has worked tirelessly to improve Georgia’s criminal justice system.  One of several significant criminal justice reform initiatives was the Accountability Court Program.  These courts are to provide effective alternatives to sentencing for nonviolent offenders and reduce the state's prison population.  I had the opportunity to share my interest in the accountability courts with Governor Deal during my interview.

I consider it a privilege that in the end I was selected for the position.

What are the main types of cases you will hear from the bench?

Was it always your ambition to serve as a judge?

Yes, my desire was always to serve as a judge. I worked hard to get here, and I am blessed to see my dream become a reality.

You leave your work as an attorney in private practice to take up the new role. What kind of law did you specialize in? What will you miss about working as a lawyer? What won't you miss?

I practiced in the areas of Criminal Defense, Juvenile and Family Law, and Immigration Law. I worked very hard for my clients and tried to give each case the personal attention it deserved.  As a result, my clients were always very grateful and never failed to let me know. I will miss my clients.  However, everything in the metro Atlanta area is 30 minutes or more away.  I will not miss having to drive to several different jurisdictions.

You replace a judge who served for 34 years. Is it likely you will continue in this role until retirement?

The position is an elected post, and I would be blessed and honored to continue being elected to serve the citizens of Douglas County for many years.

Do you feel that, as a woman, you will bring anything different to the role than the former judge? Has your gender had any impact on your career? Have you had to work harder to get to where you are, for instance?

Looking back, I do not believe that as an attorney I practiced law any different because I am a woman. Likewise, I also do not believe that I will necessarily bring anything different to the role as a woman. The judge who sat before me was an excellent and respected jurist. I plan to continue the path he was on: to be firm, but fair; to run the courtroom efficiently; and to be mindful of the lawyers, the citizens, and others touched by the court.

You are a graduate of Oakwood University and of University of Georgia law school. What did you major in at Oakwood? What career path did you see yourself following then?

I participated in the Atlanta Bar Association Summer Law Intern Program as a teenager, and it gave me an early look at what it would be like to practice law. I always knew I wanted to be an attorney.

I am, however, a bit of a science nerd. I started out with a major in biology my first semester. Oakwood University has one of the best biology programs in the country, and I took full advantage of being in that amazing program. But I knew where my passion lay. I remember telling the head of the program at the time that I was going to be changing my major to English, and he took me aside for a long conversation. He thought I would make a great doctor and that I should stay in the program. I explained that my passion was not in the medical field — it was and always had been in the law.

Even still, I approached my education with a possible back-up plan. While my friends who were interested in law were majoring in history and political science, I went the English, with a minor in communication, route for two reasons. First, I knew that law school would involve a great deal of reading and writing, so I wanted to get comfortable with writing long essays and briefs.  But I also chose my major as a back-up plan.  If for some reason law school did not work out, the plan was to become an English professor.

You are married to an attorney, I understand, and have two children? What ages are they? Have they chosen careers yet?

I am married to my college sweetheart.  Dwayne and I met at Oakwood College (now University), and after 21 years together, we are still dating!  We will celebrate 16 years of marriage this year. He is a partner at his firm, practicing civil litigation.

Our daughter Isabel is nine years old. She loves cooking and baking and says she wants to be a chef. She is already a pretty good cook.  Our son Alexander is four years old, and right now he just wants to be a superhero. He tells me to introduce him as Spiderman.

I believe you attend the Berean Seventh-day Adventist Church in Atlanta — one of the largest Adventist churches in the country. Are you active in your local church? What do you most like about your church?

As attorneys, my husband and I are called on now and then to help the church with legal issues. But what keeps me at Berean are the people and the history surrounding it.  The church is made up of people who were born there, grew up in the church, and now attend with their own children.  It makes it feel like home.  I want that for myself and my children.

How does your faith impact you in your work?

My faith is and always will be in the forefront of everything I do. God tells us to treat others as we would want to be treated. He wants us to be a shining example of who He is.  God is a loving and compassionate God, and I think some people equate that with being soft or lenient. But God is also a firm God.

Is there anything hard about being a Seventh-day Adventist in the legal profession? Do you know any other Adventist judges?

I remember being told at a young age that it would be difficult being an attorney as a Seventh-day Adventist. Some people have a negative perception about what it means to be an attorney, and the lawyer jokes don’t help.

I have never found my faith or religion in conflict with practicing my profession. Of course, there are many functions that take place on the Sabbath that I will not attend.

Personally, I do not know of any other Adventist judges, but I know they are out there and would love the opportunity to meet them.

What advice would you have for young Adventists who are studying law or hope to be lawyers or judges?

I would have the same advice that I give to any young person who expresses a desire to study law or be an attorney: I would say that if it is truly what you want to do, then go for it.

Sometimes, people are overwhelmed by all that is involved with becoming a lawyer: more school, the law school admission test (LSAT), law school itself, and then, of course, the bar exam. I tell young people, take things one step at a time. I tell them to just start with applying to take the LSAT. Once they have taken the test and received their scores, it is easier to start applying to schools.