Which Ethics? For Which Church? Revisiting Karen Blixen’s “Babette’s Feast”

Which Ethics? For Which Church? Revisiting Karen Blixen’s “Babette’s Feast” 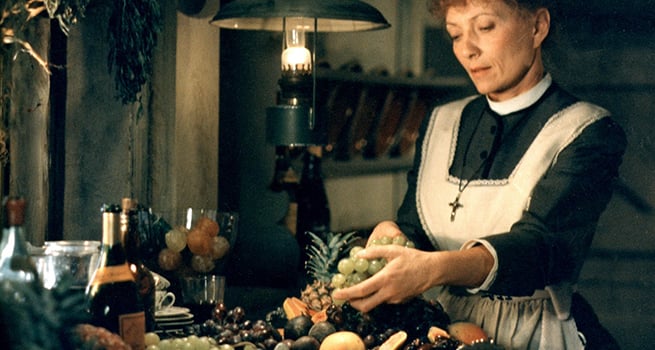 The elderly and pious Protestant sisters Martine and Philippa lived in a small village on the remote western coast of Jutland in 19th-century Denmark. Their father was a pastor who founded there a Lutheran congregation he wanted to be as rigorous, disciplined, and essential as the first Reformation communities. For this reason,  he named his daughters in honor of the Reformers Martin Luther and Philipp Melanchthon. With their father now dead and the austere congregation drawing no new converts, the aging sisters preside over a dwindling congregation of white-haired believers. The story then flashes back 49 years, showing the sisters in their youth. The beautiful girls had many suitors, but their father rejected them all and, indeed, derided marriage. They were to live only for God and the Gospel. Each daughter was courted by an impassioned suitor visiting Jutland: Martine by a charming young Swedish cavalry officer, Lorens Löwenhielm, and Philippa by a star baritone, Achille Papin, from the Paris opera. But both sisters decided to stay with their father and spurn any life away from Jutland and their spiritual mission.

Thirty five years later, Babette Hersant appears at their door. She carries only a letter from Papin, explaining that she is a refugee from counter-revolutionary bloodshed in Paris and recommending her as a housekeeper. The sisters cannot afford to take Babette in, but she offers to work for free. Babette serves as their cook for the next 14 years, producing an improved version of the ascetic meals typical of the abstemious nature of the congregation and slowly gaining their respect. Her only link to her former life is a lottery ticket that a friend in Paris renews for her every year. One day, she wins the lottery of 10,000 francs. Instead of using the money to return to Paris and her lost lifestyle, she decides to spend it preparing a delicious dinner for the sisters and their small congregation on the occasion of the founding pastor's hundredth birthday.

More than just a feast, the meal is an outpouring of Babette's appreciation, an act of self-sacrifice. Babette tells no one that she is spending her entire winnings on the meal. The sisters accept both Babette's meal and her offer to pay for the creation of a "real French dinner.”  Babette arranges for her nephew, a merchant, to go to Paris and gather supplies for the feast. The ingredients are plentiful, sumptuous, and exotic, and their arrival causes much discussion among the villagers. As the various never-before-seen ingredients arrive and preparations start, the sisters begin to worry that the meal will become a sin of sensual luxury, if not some form of devilry. In a hasty conference, the sisters and the congregation agree to eat the meal, but to forgo speaking of any pleasure in it, and to make no mention of the food during the dinner.

Martine's former suitor, Lorens, now a famous general married to a member of the Queen’s court, comes as the guest of his aunt, a rich lady of the village and a member of that local congregation. He is unaware of the other guests' austere plans, and as a man of the world and former attaché in Paris, he is the only person at the table qualified to comment on the meal. He offers the guests abundant information about the extraordinary food and drink, comparing it to a meal he enjoyed years earlier at the famous Café Anglais in Paris. Although the other participants refuse to comment on the earthly pleasures of their meal, Babette's gifts break down their distrust and superstitions, elevating them physically and spiritually. Old wrongs are forgotten, ancient loves are rekindled, and a mystical redemption of the human spirit settles over the table.

The sisters assume that Babette will now return to Paris. However, when she tells them that all of her money is gone and that she is not going anywhere, the sisters are aghast. Babette then reveals that she was formerly the head chef of the Café Anglais and tells them that dinner for 12 there has a price of 10,000 francs. Martine tearfully says, "Now you will be poor the rest of your life," to which Babette replies, "An artist is never poor." Philippa then says: "But this is not the end, Babette. In Paradise you will be the great artist God meant you to be" and then embraces her with tears in her eyes saying: "Oh, how you will enchant the angels!," which is precisely how the story ends.

We may be surprised and even laugh at the blindness and incapacity of this community to discern the one-sidedness of its ascetic orientation. But this story reminds us that every community tends in reality to do so by developing in time a close and self-referential attitude. That is known. What is less known is that religious anomalies and short-circuits often emerge within or in relation to our very same virtues. And it is an external element to the group (Babette), often stigmatized and vilified, that finally brings new insights and new resources.

Starting from this narrative about this ascetic congregation, let us consider three questions that can help us to reformulate the Ethics we Adventists need today.

Not all Christian congregations look the same. Depending on their theological and religious background they can be ascetic, society-friendly, mission-oriented, apocalyptic, philanthropic, ecumenical, liberal or conservative. Their main religious orientation conditions the type of ethics they articulate. But before this religious dimension, there also exists a sociological dimension that can be even more determinant because it precedes the others and conditions them structurally. In fact,  social theory establishes an important passage which has occurred in our time. This is what Ferdinand Tönnies called the transition from “Gemeinschaft” to “Gesellschaft.” These are two types of social groupings. On one hand, “Gemeinschaft,” often translated as “Community,” refers to groups based on feelings of togetherness and mutual bonds. These are felt to be a goal to be sustained, their members being mediators for reaching this goal. Such groups are natural, homogeneous, and past-oriented. They privilege direct, face-to-face relations through dialogue, and they tend to be of small dimensions. On the other hand, “Gesellschaft,” often translated as “Society,” refers to groups that are sustained by an instrumental understanding of individual aims and goals. These groups are artificial, heterogeneous, and future-oriented. They privilege indirect and contractual relations through written documents and tend to be of big dimensions. “Gemeinschaft” may be exemplified historically by a family, or a neighborhood in pre-modern times, or rural settings today. “Gesellschaft” might be exemplified by a joint-stock company or a state in our current times. Gesellschaft relationships arise in urban and capitalist settings, characterized by individualism and impersonal connections between people.

This social transition has been revolutionary because, fundamentally, it has given our lives a lot of efficiency and dynamism. And this passage has gradually involved all the important dimensions of our existence. At the beginning, it involved the workplace and its productive activities then successively health systems, educational systems, and finally and paradoxically also religious congregations and families. But this sociological transition, quiet and unnoticed, ended up also deeply transforming ethics. Ethics today can be of various types: managerial, medical, educational, religious, or secular. But, at bottom, all share the same sociological pattern: a strong vocation for planning, order, and efficiency. Ethics today tends structurally to have a consistent instrumental and managerial component, independent of its ideological configuration (McIntyre).

2. What kind of group is Adventism?

In spite of all resistance and criticism towards current secular societies, and beyond the radical theological differences existing between these and Adventism, we Adventists have experienced the same radical social transformation. In fact, Adventists today are mostly a Gesellschaft-type group. We have become socially heterogeneous, artificially bounded, goal-oriented, procedural, and impersonal in our human and administrative transactions—led by abstract and standard rules. And all this independent of our theological orientations. That is visible in the organization, life, and human interactions within our big institutions (Loma Linda University, Andrews University, for instance) as much as in the little ones (Villa Aurora, Collonges or Friedensau). And this is an ambivalent fact. On one side it has given us efficiency and order but, on the other side, it has made our relations more procedural and mechanistic. Our ethics bears the same sociological traits.

The massive triumph of the “Gesellschaft-type group,” within our current societies, as much as in Adventism, has produced in time a new contra-phenomenon that Michel Maffesoli calls “The Time of the Tribes.”  It is the desperate search for “community” and “belonging,” for traditional, religious, and national values considered uncritically as a safeguard against the moral dissolution of our societies. This genuine search and aspiration nevertheless does not succeed in solving the problem of the diffuse atomization and dis-embedding still among us; rather, it tends to polarize our societies even more, creating a new ethical dilemma. According to Giacomo Marramao, this new polarization is formed, on one side, of a diffuse and transversal “disenchanted Ethics of individual consumerism”and, on the other side, of a “seductress and re-enchanted religious Ethics of communitarian belonging” which intends to correct the first one but, in fact, ends up reinforcing the polarization. And, we could add, applying Marramao’s insight, that only a wise and balanced Adventism, provided with some cultural sensitivity, will be able to escape this polarization and avoid giving reactionary forces in society, as well as within the church, attention and credibility.

Karen Blixen’s short story reminds us of some elementary social rules that each group should always keep in mind. First, it is easy to get stuck in our own virtues and, at a certain point, stop living. Second, a search of only internal solutions in a trapped group is the worst strategy we can conceive of because these often do not solve the problem but rather end up radicalizing it.